Nearly Half of All Western Wildfire Costs Go To California

By Alyson Kenward and Urooj Raja

With one of California’s largest-recorded wildfires still burning largely uncontained and threatening water and electricity for millions, the total bill for fighting U.S. wildfires in 2013 is now likely to soar well past $1 billion. By the time the blaze is put out, which could be weeks from now, California’s Rim Fire will likely be among the most expensive wildfires of the year. In fact, during the past 10 years, $4 billion has been spent fighting wildfires in California, more than in any other state. 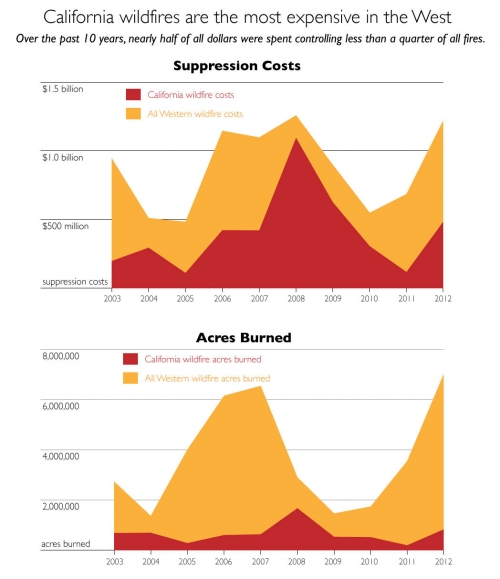 On average from 2003-2012, California wildfires had 44 percent of all reported suppression costs in the western 11 states (based on fiscal fire years, October 1 - September 30). Only 24 percent of acres burned were in California, on average, over the same time.
Click image to enlarge.  Credit: Climate Central

Each year, on average, nearly half of all the money spent fighting wildfires in the West goes to California fires. But California’s wildfires typically make up less than a quarter of all the acres burned in the western states. California has 14 percent of all the forested land in the West.

Between 2003-2012, an average of $400 million was spent annually fighting wildfires in California. And on average, California spends almost as much on wildfire suppression each year than 10 other western states combined (Washington, Oregon, Idaho, Nevada, Utah, Montana, Wyoming, Colorado, New Mexico, and Arizona).

In the 2008 fire year, which ran from October 2007-September 2008, costs soared to more than $1 billion, partly because of a series of large wildfires that burned more than 350,000 acres in the state’s densely populated southwestern region. That year, a staggering 87 percent of all money spent fighting western wildfires was spent in California.

A 2007 U.S. Forest Service study also found that on a per-acre basis, California’s wildfires cost more than any other state or region. That’s partly because the firefighting resources themselves cost more in California – crews and equipment are usually significantly more expensive than in other states.

But the costs in California are also higher because with more people and more development across the state, there’s more at stake when wildfires ignite. Often, more firefighters and equipment need to be mobilized in order to rescue people and save homes and essential infrastructure, like power lines.

The high cost of fighting wildfires in California is just an indicator of what the entire West can expect in the coming decades. The combination of more wildfires, fueled by warming temperatures, more people living and building infrastructure near and within forests across the West, and changes in forest management practices, will drive the costs of fighting wildfires even higher.

The data illustrated above is based on reported wildfire suppression costs compiled by the National Wildfire Coordinating Group, and specifically from historical incident ICS-209 forms and SIT-Reports in the FAMWEB database. These reflect money spent to extinguish a fire, which typically consist of service wages, transportation, supplies and equipment costs, and are not adjusted for inflation. They do not include costs associated with damaged homes and they don’t reflect any loss of life from wildfires. Each year represents the fiscal fire year, which runs from October 1 of the preceding year through to September 30 of the listed year. The data include all wildfires reported on lands under federal protection (larger than 100 acres for timber or 300 acres for brush) minimum threshold as well as all other fires (state and private) that were voluntarily reported by each state.