LONDON – It isn’t just the catastrophic storms and tropical cyclones that threaten disaster for the world’s coastal cities. Simple, insidious things like sea level rise, coastal subsidence and the loss of wetlands could bring the sea water coursing through city streets in the decades to come. 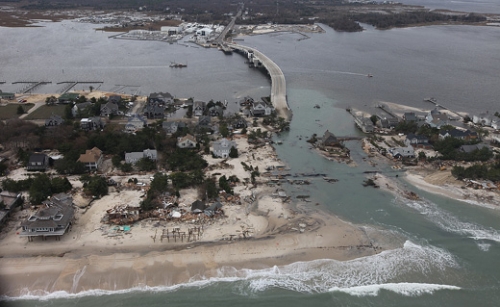 Aerial photo of Mantoloking, N.J., after Hurricane Sandy. Many cities are on low-lying coastal plains or on river estuaries and are therefore at risk as sea levels rise because of global warming.
Credit: Flickr/ U.S. Fish and Wildlife, Greg Thompson

Jonathan Woodruff of the University of Massachusetts Amherst in the U.S. and colleagues report in Nature that shorelines are increasingly at risk, and humans must adapt and learn to live with increasing hazard.

Many of the world’s great cities are on low-lying coastal plains, or on river estuaries, and are therefore anyway at risk as sea levels rise because of global warming.

But human action too – by damming rivers, by extracting ground water and by building massive structures on sedimentary soils – has accelerated coastal subsidence. Add to this the possibility of more intense tropical cyclones as sea surface temperatures rise, and coastal cities face a stormy future.

On October 29, 2012 Superstorm Sandy brought a surge of sea water into the streets, subway tunnels and basements of New York City and caused $65 billion worth of damage along the entire eastern seaboard of the U.S. It was an unprecedented event. But it may happen again.

“A rise in sea level of one meter (39 inches) for the New York City region would result in the present-day 100-year flood events occurring every three to 20 years,” warn Woodruff and his fellow scientists in their Nature study.

“Most engineered coastlines are not designed for this increase in extreme flood frequency, and the dominance of sea level rise and landscape dynamics on impacts by landfalling tropical cyclones must be acknowledged for effective planning and management of our future coastlines.”

The scientists reviewed nearly 100 research studies of coastal change. They also noted that, according to an international register of disasters, more than 60 percent of economic losses – around $400 billion – occurred in the North Atlantic, one of the areas least at risk from tropical hurricanes. The lesson is that governments and civic authorities will need to think more carefully about future threats.

“Sea-level rise, severe storms, changing climate, erosion and policy issues are just some of the factors to assess in order to understand risk,” says another of the authors, Jennifer Irish of Virginia Tech College of Engineering.

“We reviewed just three of the physical factors – tropical cyclone climatology, sea-level rise and shoreline change. If we look at them separately, we don’t see how they are interconnected. 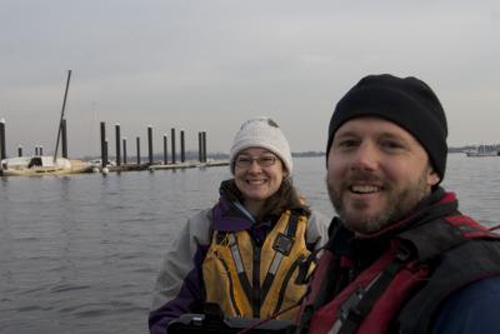 “But if we pull back to look at the whole picture, we stand a better chance of protecting our homes, roadways, energy and water networks, and the most critical and expensive infrastructure along the coastlines.”

Other authors in the Nature special feature on coastal threats argue that rather than restore costly sea walls and other engineered coastal defenses, it might be more efficient to restore tidal marshes, coastal wetlands, barrier islands and other natural ecosystems that have traditionally served as buffer zones for coastal-dwelling communities.

“Tidal marsh plants are amazing ecosystem engineers that can raise themselves upward if they remain heathy, and especially if there is sediment in the water,” says Patrick Megonigal of the Smithsonian Environmental Research Center, one of the authors.

“We know there are limits to this, and worry those limits are changing as people change the environment.”