NASA is spending $916 million on a new satellite, scheduled to be blasted into space over the weekend, following nearly a decade of work and two launch delays, that will help scientists measure moisture levels in the top two inches of the world’s soils.

Scientists clamoring to probe a couple inches of loam or humus might sound like much ado about nothing. But to the earthy folks who research agriculture, forestry, weather and climate, probing those two inches of dirty moisture could go a long way toward helping us understand the world in which we live. 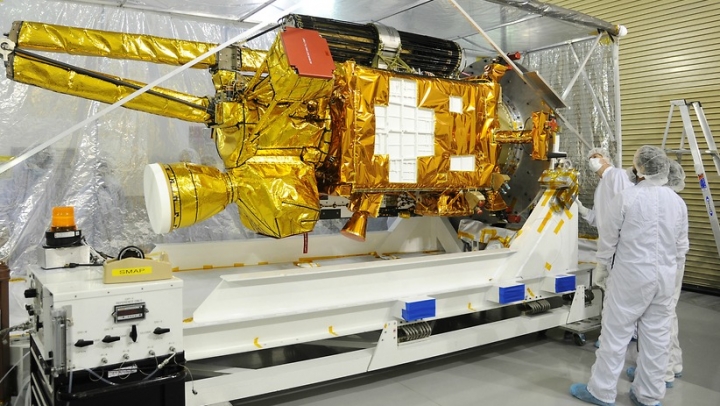 Here’s a rundown that will help to explain why NASA’s Soil Moisture Active Passive, or SMAP, mission, is causing so much buzz among scientists who spend so much of their time obsessing over dirt and water.

Who Gives An Earthworm’s Casting About Soil Moisture?

Water, carbon, nutrients and energy are the four main ingredients of life, and their life-sustaining roles and planetary cycles are intimately intertwined. That’s especially so in soil.

Soils are home to some of the world’s most diverse, critical and underappreciated ecosystems, which are known as rhizospheres (“rhizo” comes from the Greek work for root). Fungi and other microbes in rhizospheres ferret out water supplies and nutrients from the soil and pass them to plants through their roots — in exchange for carbon that’s sucked out of the atmosphere through the plants’ leaf pores and photosynthesized. A lot of that carbon gets locked away by microbes into the top layer of the Earth, stabilizing the climate and enriching local ecosystems.

“As much as any climate variable, soil moisture is what ultimately matters to people, plants and animals,” Park Williams, a bioclimatologist at Columbia University’s Lamont Doherty Earth Observatory, said.

“Soil moisture dictates streamflow, lake levels and how much water is available for irrigation. Evaporation from soil and transpiration from plants affects regional temperature, humidity and even precipitation,” Williams said. “It’s critical to know what the soil moisture is if we want to most accurately forecast drought, floods and weather.”

How Is Soil Moisture Measured Now?

The U.S. Department of Agriculture and the National Oceanic and Atmospheric Administration both operate networks of devices that are planted in the soil in different parts of the U.S. These devices are highly accurate, but there’s not many of them, so the data they produce is geographically sparse. Some satellite-based devices are already circling the skies, but the data they provide is geographically limited, and they only describe conditions in the top half-inch or so of the soil.

How Will SMAP Work? 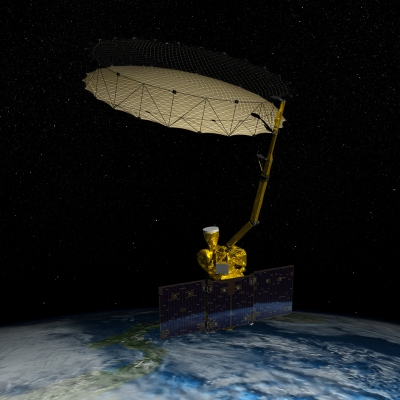 An artist's rendition of what the solar-powered SMAP will look like in space.
Credit: NASA

SMAP is a satellite observatory that will be launched into space aboard a rocket that will blast off from Vandenberg Air Force Base, which is north of Los Angeles. Plans to launch the mission on Thursday, and then on Friday, were postponed due to strong winds in the area and equipment problems detected during last-minute inspections. The latest plan is to launch at 6:20 a.m. Saturday, Pacific Time.

Following nearly a year of calibration and testing as it loops around the planet, at an altitude of more than 400 miles, NASA will combine data from two devices aboard the 2,000-pound satellite — a radiometer and a radar — to produce new maps of soil moisture levels every few days. “What the scientists who worked on this have come up with is a way to use the best of both,” NASA project scientist Jared Entin said.

A microwave radiometer, similar at a rudimentary level to a camera that can see a non-visible spectrum of light through clouds, will monitor radiation to produce accurate but geographically coarse measurements of soil moisture. A radar, more sophisticated than those used by traffic police, will bounce rays off the Earth and measure the backscatter to produce approximate but geographically specific measurements of soil moisture. The radar will also help scientists understand cycles of freezing and thawing in cooler climates.

The SMAP data will be combined with existing observations, such as rain and snow measurements, to estimate soil moisture down to three feet, and to study the ways that carbon moves between the atmosphere and the land.

What Does This Have To Do With Climate Change?

Amid ongoing uncertainty over how climate change is influencing water cycles and drought, the data acquired by SMAP will “help shed light on how soil moisture varies over time, and can be used to test and improve climate models,” Justin Sheffield, a Princeton University researcher who studies how climate change is affecting hydrological cycles, said.

Global warming could be drying out the soils in one-third of the world’s land, but climate change’s precise parching effects are not yet fully understood. To adapt to climate change, it helps to precisely understand the changes that are underway. Understanding whether mud is turning to dust, or vice-versa, and when, will help farmers and corporations decide which crops to plant, and when, in a warming world. Understanding how moisture levels are changing could help with firefighting efforts.

“SMAP will provide a revolution in monitoring of soil moisture, and I foresee some exciting applications that will help reduce the impacts of floods and droughts,” Sheffield said.

You May Also Like:
Four Things to Know About Keystone XL
Nuclear Power Needs to Double to Meet Warming Goal
Thunderstorms Helping Bring Ozone Down to Earth
What Can We Learn from the NYC Forecast ‘Bust’?
Obama And Modi Are Buddies, But Will The Climate Care?