Siberian wildfire season is off and running with multiple blazes searing the boreal forest and tundra. It’s the latest example of the vast shifts happening to the forests that cover Siberia and the rest of the northern tier of the world as climate change alters the landscape.

Those forests are burning at a rate unheard of in at least 10,000 years due largely to rising temperatures. They contain vast reserves of carbon stored in trees and soil and when they burn, they send that carbon into the atmosphere. That creates a dangerous cycle of more severe wildfires and ever rising temperatures. 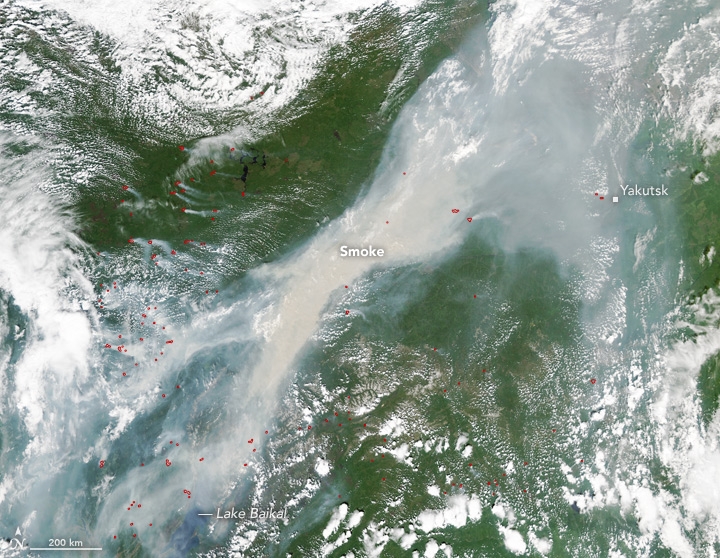 The current constellation of conflagrations had burned through roughly 133,000 acres to the west of Lake Baikal in southern Siberia as of last week. Strong winds have sent smoke spiraling hundreds of miles northeast, impacting air quality across the region.

NASA’s satellites captured the scene on Friday from a few different vantage points. The Aqua satellite captured the extent of the thick plumes of smoke and fires dotting the region while the Suomi NPP satellite was able to analyze the air quality. Both show the stunning breadth of impacts wildfires can have. The Suomi NPP measurements in particular show that the aerosol index — a measure of air quality — hit 19, a mark that denotes very dense smoke.

According to NASA Earth Observatory, scientists are also investigating signs that the fires were burning so intensely, they altered the local weather. There’s evidence pyrocumulus clouds formed, a phenomenon that occurs when wildfires burn so hot that they cause localized convection that eventually forms clouds.

The region where fires are burning has been a hot spot on the global temperature map. Since November, temperatures have been up to 7°F above average with some months far exceeding that mark. Climate change has been driving up temperatures around the world, but the northern tier of the planet has seen temperatures rise twice as fast. 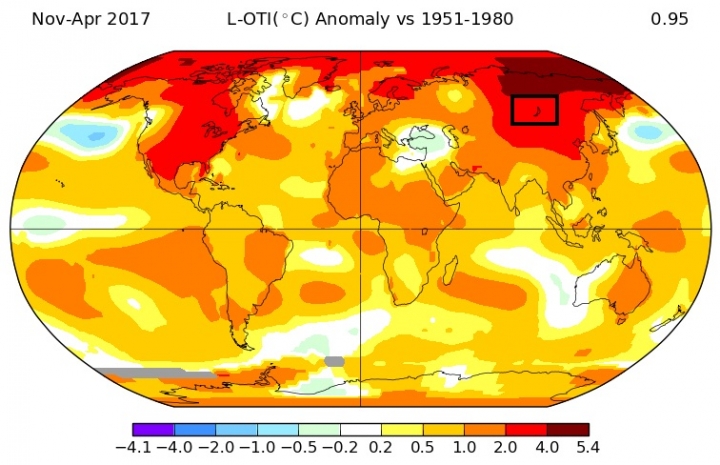 Temperatures in Siberia were up 7.2°F above normal from November 2016-April 2017.
Credit: NASA

The extra heat has caused a string of severe wildfire seasons not just in Siberia, but in other stretches of the boreal forest that also covers Canada and Alaska. Last year, a massive blaze overran Fort McMurray, Alberta and became the costliest natural disaster in Canadian history. The year prior, Alaska had an explosive early start to its wildfire season. This is the third year in a row massive fires have lit up Siberia.

These individual events are part of a new reality that the boreal forest is burning at a rate unprecedented in modern history. Large fires in Alaska are twice as common as they were 75 years ago, according to Climate Central’s own research. That same report found that Alaskan wildfire season is 40 percent longer as well. Similar changes have been observed in Canada as well.

Climate change is expected to continue driving conditions that make destructive fires more common in boreal forests. That will reshape some of the most unique ecosystems on earth and the climate system itself. Boreal forests store about 30 percent of the world’s carbon. When they burn, they put that carbon in the atmosphere, increasing the impacts of climate change and creating a vicious cycle that will likely lead to more fires.

You May Also Like:
States Betting on Giant Batteries to Cut Carbon
We Couldn’t Monitor Larsen C Without These Satellites
Climate Change Altering Droughts, Impacts Across U.S.
Atlantic Oil Surveys Could Kill Food Used By Fisheries