NASA Satellite Sends Back Most Detailed View of CO2

SAN FRANCISCO — It’s been a busy five months for NASA’s newest carbon dioxide-monitoring satellite, snapping up to 1 million measurements a day of how carbon dioxide moves across the planet. Now NASA scientists have shared the first global maps created using that data, showing one of the most detailed views of CO2 ever created. 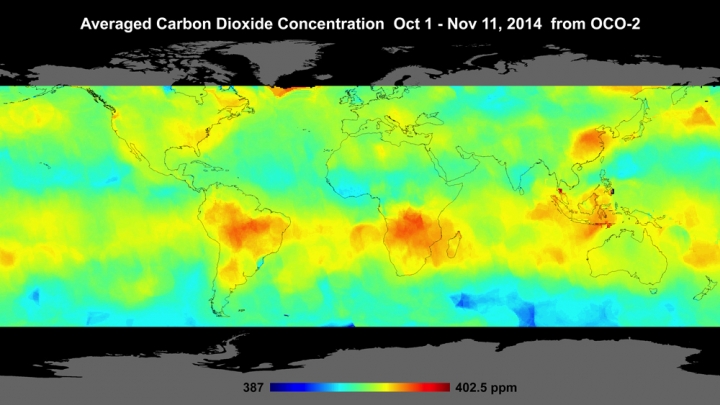 The satellite — known as OCO-2 — has been in orbit since July. While it’s returned some preliminary data, NASA showed off its global reach for the first time on Thursday at the annual American Geophysical Union meeting.

According to deputy project science Annmarie Eldering, previous CO2-monitoring satellites were returning just 1-2 percent of the data that OCO-2 is sending back to Earth. And while the satellite can’t peer through clouds, it has still provided scientists with a staggering amount of information to create comprehensive maps of CO2 and plant growth.

“Measuring an atmospheric gas to a fraction of a percent makes OCO-2 one of the most challenging remote sensing missions that have ever been attempted,” Paul Wennberg, a professor at Caltech, said.

And yet all systems appear to be go and if preliminary results are anything to judge by, the data should be fascinating. NASA showed off two maps that are an amalgamation of 600,000 measurements taken over 12 days from the end of October.

The first map shows CO2 concentrations in the atmosphere. Hot spots over the Eastern Seaboard and parts of China are clearly visible, a sign of the heavy industry on the ground.  South America and parts of Africa also show high CO2 levels, which scientists said is most likely due to burning fields and forest to clear them for agriculture. There are also subtle differences between the view OCO-2 has returned and what NASA’s most advance computer models currently simulate, which is at the heart of why the satellite exists in the first place. 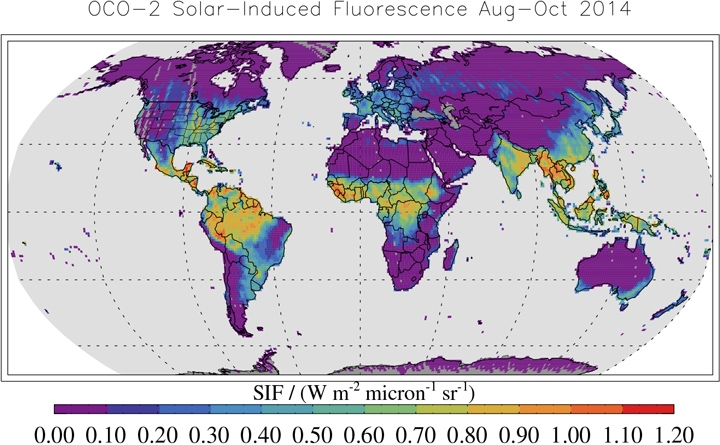 A second sensor on the satellite also measures levels of chlorophyll fluorescence, a measure of plant productivity, in finer detail than other satellites as well. NASA has previously used other satellites to show how the U.S. Corn Belt is the most productive place on the planet, and the new data from OCO-2 will further help refine the measurement of plant growth and how it relates to CO2 absorption.

With such a wealth of data, it would be a shame if NASA kept it all under lock and key but luckily that’s not the case. Eldering said the initial round of data would be available to the public on December 30 and the full set of CO2 data would likely be available in March for scientists and public to download and explore.