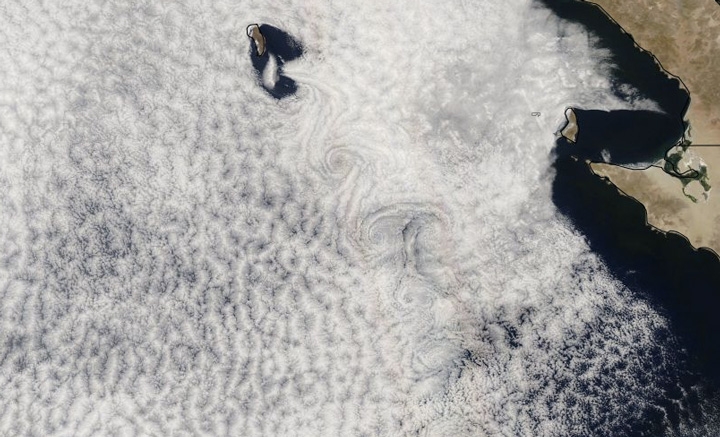 NASA's Aqua satellite snapped this image of a set of swirling eddies called von Kármán vortices and a rainbow-like optical phenomenon called a glory off the coast of Baja California on June 8, 2014.
Credit: NASA

NASA’s eyes in the sky are important parts of weather-monitoring efforts, with satellites tracking hurricanes as they barrel across the ocean and storm systems as they sweep across the country. But sometimes they just find really cool stuff in the atmosphere.

Such is the case with an image taken by the MODIS instrument aboard the Aqua satellite (with a hat tip to Climate Central board member and University of Georgia professor Marshall Shepherd on Twitter). On June 8 it spotted a wow-worthy combo of atmospheric phenomena off the coast of Baja California: von Kármán vortices and a glory. Not meteorologist? Let’s break down what these terms are then.

The von Kármán vortices, named for Hungarian-American physicist Theodore von Kármán, appear as a set of eddies following each other in a line. To explain how they form, it helps to remember that air is a fluid, just like water. Just as a rock can perturb water flowing around it in a stream, an island or some other obstacle can perturb the clouds and air flowing over it.

The aptly-named glory happens when light from the sun is scattered backwards by water droplets in clouds. To an observer on the ground, they appear as a halo of rainbow colors directly opposite the sun in the sky. They are most often seen in thin clouds or fog from mountains or other high ground and from airplanes.

For a satellite looking down at the Earth, the set-up is a little different: A satellite takes scans in swaths perpendicular to its path across the sky. These swaths cut horizontal cross sections of the glory, according to NASA’s Earth Observatory, making the glory appear as a long band of color.

Regardless of whether you’re a meteorologist or just your Average Joe, it’s safe to say the image is pretty spectacular. So next time you want to browse through NASA’s satellite images, look closely and you may see something equally amazing.