Hurricane Joaquin continues to strengthen in the Atlantic. The storm is edging closer to the Bahamas with landfall there likely in the next 24-36 hours followed by a potential date with the East Coast.

The storm reached Category 1 status on Wednesday morning and has continued to strengthen throughout the day. As of Wednesday afternoon, the storm had 85 mph winds and stood about 190 miles to the east of the Bahamas. The storm is expected to continue strengthening on its way there before turning northward toward what could be a U.S. landfall somewhere between the Carolinas and New Jersey.

Forecasters have a number of tools at their disposal to monitor the storm including a constellation of satellites. NASA’s Global Precipitation Measurement satellite — the agency’s most advanced precipitation satellite — is one, keeping a close eye on just how much rain the storm is dropping. NASA launched the satellite last year with the intent of improving both weather forecasts and climate projections. It’s already provided valuable information about all kinds of precipitation, including the major snowstorms that buried the Northeast last year.

Now NASA has published a 3-D “flyby” of Hurricane Joaquin. The findings show rainfall rates of 2-5 inches an hour near the storm’s core. The flyby is based on data taken Tuesday when the storm was still battling wind shear. That’s since become less of an issue and the storm has grown stronger and more organized as a result.

That heavy rain is expected to inundate the Bahamas starting Wednesday night or early Thursday. According to the National Hurricane Center, 5-10 inches of rain is likely in the central portion of the island chain and up to 20 inches isn’t out of the question for certain areas. 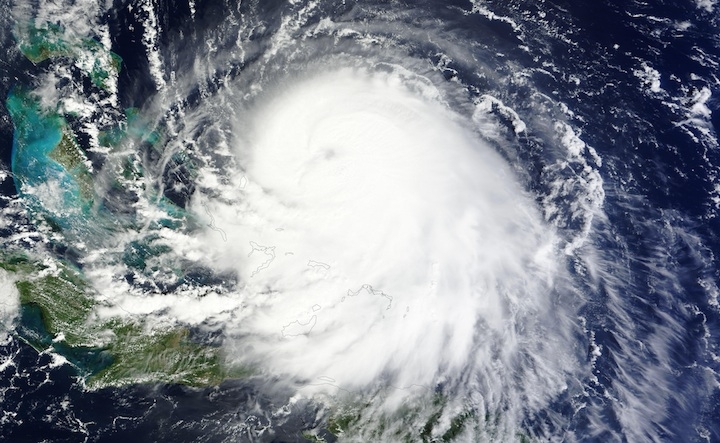 Hurricane-force winds and a storm surge of 2-4 feet are also in the forecast for the islands.

After the Bahamas, Joaquin is expected to hook north and continue strengthening over a patch of exceptionally warm water and the storm could reach major hurricane status — that is, a Category 3 or greater storm — in the next 48 hours.

While landfall in the U.S. is looking more likely, there’s still some uncertainty thanks to the complex weather pattern over the Eastern Seaboard. Where Joaquin goes after the Bahamas and how fast it moves will likely become more clear in the next 48 hours.

The East Coast still has plenty of wild weather to deal with before clarity on Joaquin arrives. Heavy rains are buffeting the region through the weekend with up to 11 inches of rain possible in parts of the Carolinas and Mid-Atlantic.