The full, devastating scale of the downpour-driven flooding that tore across the Balkans in mid-May is evident in newly released images from a NASA satellite. 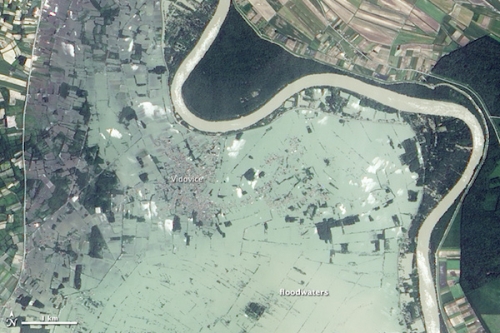 This image, taken by the Advanced Land Imager on NASA’s Earth Observing-1 satellie, shows a close-up of the town of Vidovice, Bosnia and Herzegovina, surrounded by and inundated with water from the Sava River.
Credit: NASA

Torrential rains fell across parts of Croatia, Serbia, and Bosnia and Herzegovina beginning on May 13, with some spots recording a third of their annual rainfall total in just three days. The heavy rains were unprecedented in the 120-year record for the region.

Such heavy short-term rainfall makes it difficult for the ground to absorb all the water, and the ground in the region was already well saturated by unseasonably strong April showers.

All that excess water went barreling down slopes, washing away buildings and causing thousands of landslides, and into streams and rivers, many of which burst their banks.

The floodwaters washed across the countryside, submerging towns and villages, such as Vidovice, Bosnia and Herzegovina, seen in the high-resolution image from NASA’s Earth Observing 1 satellite. A second satellite image shows the town in the context of the flooding along the Sava River, a tributary of the Danube. To the north of the river lies Croatia; to the south, Bosnia and Herzegovina. 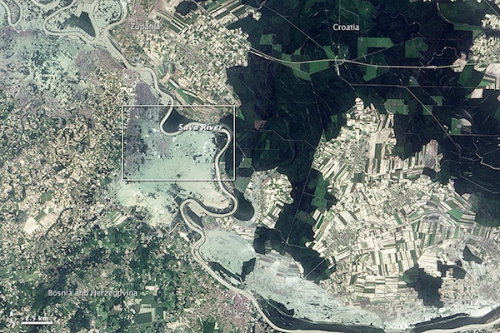 The flooding along the Sava River, with Croatia to the north, and Bosnia and Herzegovina to the south stands out in this image by NASA's Earth-Observing-1 satellite.
Credit: NASA

The flooding killed dozens, forced thousands from their homes and caused more than $1 billion in damage according to early estimates.

While individual extreme weather events are difficult to link to climate change, especially so soon after the event, climate scientists expect extreme rainfall events to become more frequent in a warming world. As the temperature of the atmosphere increases, the more water vapor it can hold, weighting the dice toward heavier rains.