For the third month in a row, global temperatures reached record territory according to newly available data from NASA. And if one global temperature record isn’t enough, the Japanese Meteorological Agency also provided new data on Friday that showed the warmest October on record.

Data from NASA Goddard Institute for Space Studies (GISS) show this October was 1.4°F above the 1951-1980 average they use as their baseline. That didn’t set a monthly mark, as did August and September, but rather tied 2005 as the warmest October since 1880. That keeps 2014 on track to be the hottest year on record.

While individual hot years or months don’t necessarily stand out, it’s notable that all 10 of the warmest years on record have all come since 1998, one of the clearest signs that the climate is warming due in large part to greenhouse gas emissions.

NASA data reveal that far eastern Siberia was an eye-popping 10°F above normal for October, but western Europe, northern Africa and western North America also saw temperatures up to 7°F hotter than average. The data also comes a day after the National Climatic Data Center (NCDC) released its October numbers for the U.S. that showed the lower 48 had its fourth-warmest October on record.

If you’re a fan of corroborating data, the Japanese Meteorological Agency (JMA) also released data on Friday (with a hat tip to Joe Romm). JMA uses a slightly different base period and averaging technique than NASA, but its numbers still show that this October was the hottest on record. Specifically, the data show that October was 0.6°F above the 1981-2010 average with similar hot spots compared to NASA. 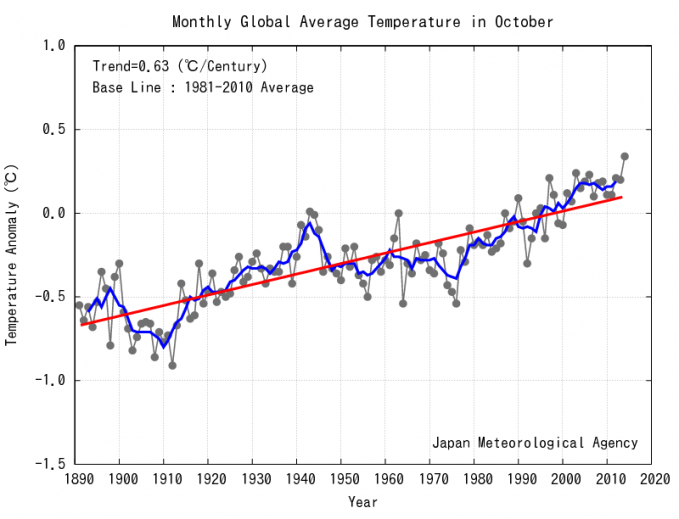 Global temperature anomalies for the month of October compared to 1981-2010 average. Credit: JMA

And if you’re a fan of triple redundancy, a third set of global numbers will be released next week by NCDC. Its data through September show that record warmth in the oceans has in large part driven global temperatures upward for the year to-date. This despite the lack of El Niño, which generally provides a boost to overall ocean and even global temperatures.

The hot October bolsters the likelihood that 2014 will become the warmest year on record. Though El Niño is still muddling around in the tropical Pacific, if it does form by year’s end, it would likely only help crank up the heat.

You May Also Like:
Warmer Winter Means Savings on Home Heating Costs
Picture This: Cold, Cold, Cold (And Some Snow)
Economists: EPA CO2 Plan May Be Too Weak
Thunderstruck: Lightning Will Increase With Warming