Mystery of Oil Field Fugitives Closer to Being Solved

Fugitives are escaping oil and gas fields across the country.

It’s well known who the fugitives are, but exactly where they come from and how many there are has long been murky.

An oil well pumpjack included in the Cooperative Institute for Research in Environmental Sciences study conducted in the Uintah Basin of Utah. Credit: CIRES/flickr

The oil field fugitives aren’t people, of course, but gases — methane, benzene, toluene, xylene and other volatile organic compounds. Some of them cause cancer. Methane, like carbon dioxide, is a greenhouse gas that meddles with the climate, forcing a lot of warming in the atmosphere.

These gases are fugitives because they’ve been found leaking from oil and gas fields, which is one the biggest criticisms of the hydraulic fracturing and shale oil and gas boom sweeping Pennsylvania, Texas, and large swathes of the West today.

But because the air in a lot of oil and gas fields in the U.S. isn’t closely monitored, pinpointing precisely how they’re escaping from oil and gas equipment has been a bit of a mystery.

Sleuthing scientists sniffing around wells in an oil and gas field in Utah and another nearby in Colorado have begun to crack that mystery. In a new study published this month in the journal “Atmospheric Chemistry and Physics,” scientists studying the air quality in Utah’s Uintah Basin were able to determine what specific kinds of oil and gas field machinery were leaking those gases.

The study is important because it’s one of the first that actually pinpoints the types of equipment that can leak large amounts of pollutants and greenhouse gases, said Cornell University environmental engineering professor Anthony Ingraffea, whose research detecting fugitive methane emissions from oil and gas fields was cited in the study.

The study also shows that natural gas fields close to each other can have wildly different rates of leaking gases, illustrating why it’s important for regulators to actually measure pollution in the field instead of relying on leakage that is expected to occur based on lab testing, Ingraffea  said.

“To understand ozone pollution, we need to understand both the chemistry behind it and the major sources that start this chemistry, and we went right to the source of the emissions to study them,” said the study’s lead author Carsten Warneke, an atmospheric chemist at the Cooperative Institute for Research in Environmental Sciences at the University of Colorado-Boulder.

Here’s why: Oil field valves, wellheads and other equipment are expected to leak a little bit.

“Typically, a piece of equipment has a certain emission rate that’s been assigned to it,” said study co-author James Roberts, a research chemist at the National Oceanic and Atmospheric Administration in Boulder, Colo.

When the U.S. Environmental Protection Agency calculates greenhouse gas emissions rates from oil fields, they add all the assigned, or expected, emissions rates of oil field equipment operating in the field to create an estimate, he said.

There’s what leaks in the lab. And then there’s reality.

“Equipment is always different; It doesn’t always operate the way it did in the lab,” he said. “Our lesson is, gee, you have to go out and make those measurements (in the field).”

When the researchers measured leaking gases from wells they found levels of pollution they didn’t expect to find, he said.

Benzene levels, which are normally less than 0.2 parts per billion in the air in urban areas, were found to be 1,000 parts per billion near some wells featuring ponds full of water that came out of the well after it was hydraulically fractured, or fracked.

Other volatile organic compounds were found coming from tanks, machinery designed to separate natural gas from liquids, and other equipment.

The emissions and leaks the team found in Utah doesn’t exactly translate to other areas of the country because every oil and gas field is different, and so is the equipment used there and the environmental regulations keeping that equipment in check. 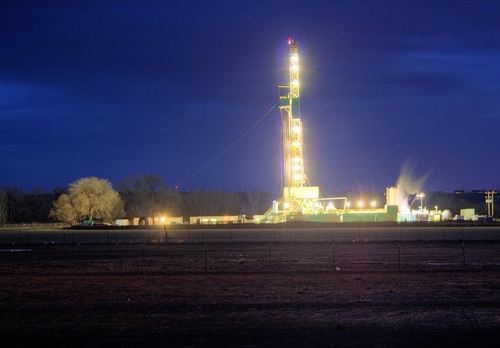 When the researchers went to a nearby oil field across the state line in Colorado, they found fewer gases leaking into the atmosphere. That’s because wells there produced a different kind of gas and were operated with different equipment and powered with electricity instead of the fossil fuels used to power wells in Utah.

The new light shed into oil and gas emissions in Utah echoes another new study published Oct. 30 in the journal Environmental Health, which sniffed out a wide range of air pollutants around oil and gas well sites throughout the U.S. The study did not investigate greenhouse gas emissions levels from oil and gas production sites.

Researchers at the Brooklyn Law School and University at Albany in New York and other institutions trained residents living in shale oil and gas fields in Colorado, Wyoming, Ohio, Arkansas and Pennsylvania to take air samples near their homes at times of high oil and gas field activity.

The air samples taken from residents’ property near oil and gas wells revealed that being in an oil field for just five minutes could expose you to enough benzene that would be the equivalent to what they’d inhale if they lived in Beijing for eight and a half months. Such a high level of benzene was measured at one site in Wyoming.

Many sites also measured extremely high levels of hydrogen sulfide and formaldehyde, but the researchers said their study’s results are limited because they used air quality samples from only 35 wells of many thousands that exist across the U.S.

Both of the studies are evidence that scientists are coming closer and closer to determining how fugitive gases escaping from oil and gas fields can harm both people and the climate.

Though the studies suggest that fracking doesn’t necessarily mean oil and gas wells are leaking a lot harmful gases, it may benefit everyone if regulators and scientists are keeping a close watch out for unexpected fugitives.