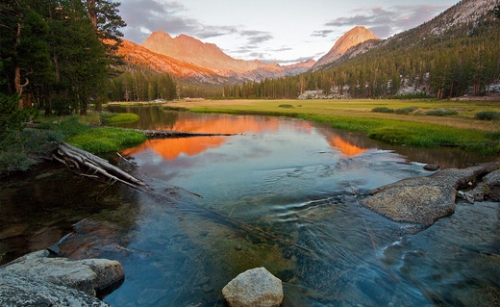 The forestry changes underway threaten to slash the amount of water that flows down the mountain’s western rivers by a quarter by the end of this century.
Credit: Steve Dunleavy/flickr

As the globe warms, these landscape transformations are occurring at higher altitudes. Temperature gradients over the sierra are shifting uphill, and they appear to be dragging lush, diverse, thirsty forests with them—up into lands where temperatures had previously been too cold for them to survive.

These landscape changes in the warming Sierra Nevada could have major repercussions for California’s economy. The thirstiness of the dense forests that flourish in the mountain’s middle reaches, an expanding sweet spot where water is more ample than in the lower ranges, and where temperatures are more amenable to plant life than in the higher stretches, makes them bona fide water hogs.

The forestry changes underway threaten to slash the amount of water that flows down the mountain’s western rivers by a quarter by the end of this century.

That’s according to findings published Monday in Proceedings of the National Academy of Sciences. The research, by two University of California scientists, is the first to examine the hazards posed by this leafy uphill march for those other thirsty residents of California—the families, factories, and farms that rely on rivers draining west from the Sierra Nevada for more than 60 percent of their water needs.

“It’s a study that goes in there and says, ‘Could this be a big effect?’” said Michael Goulden, an associate professor at the University of California at Irvine, one of the paper’s coauthors. “Yeah, this could definitely be a big effect.”

The study only took measurements from one water basin in the Sierra Nevada, but the findings could have implications for water runoff at other mountains around the world as the climate continues to change.

Goulden and University of California at Merced professor Roger Bales use devices that measured evapotranspiration — that is, the amount of water sucked up by roots and breathed out by leaves — at four different altitudes in a sierra basin that nourishes Kings River.

“The first thing we saw was that evapotranspiration was highest at mid-elevation, and it was considerably lower at the highest site that we looked at,” Goulden said. Then they subtracted evapotranspiration rates from snowfall and rainfall figures. “That tells you what’s left over for streamflow.”

They concluded that most of the mountain’s runoff is being produced in areas above 7,000 feet. They warn that area could be encroached upon by thirstier forests as the mountain warms. 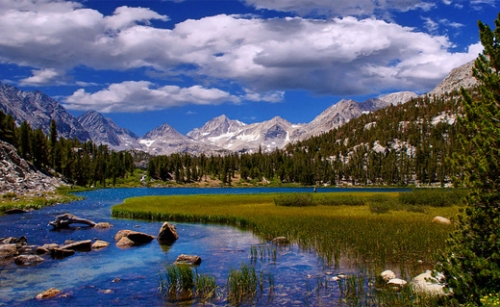 The research is the first to examine the hazards posed by this leafy uphill march for those other thirsty residents of California.
Credit: George Mejmantowicz/flickr

They extrapolated their findings to other parts of the basin using satellite images, which helped them compare forest cover. They looked at climate projections published in the recent Intergovernmental Panel on Climate Change report, attempting to forecast how temperature rise will influence where different types of forests will grow. Then they combined those findings to conclude that westerly river flows originating in the Sierra Nevada could be reduced by 26 percent by 2100 — just because of the effects of vegetation changes.

The study comes with a laundry list of limitations. It didn’t closely examine the effects of expected precipitation changes or carbon dioxide levels on forest cover. And it makes a lot of assumptions about how forests will change as the climate changes — because detailed models simply are not available.

But it nonetheless makes inroads into understanding an influential phenomenon that has long been overlooked.

“Widely cited studies that simulate the effects of climate change on freshwater supply do not incorporate changes in vegetation,” said Wouter Berghuijs, a University of Bristol researcher who was not involved with the study. “This mechanism is conceptually not new, and it makes physical sense. But the authors very clearly, and to my knowledge for the first time, highlight that this can have a significant effect on the mean water supply.”

The new study is the latest bad news for water managers in California, and elsewhere, who are already bracing for a dryer future. Less rain and snow is forecast to fall on the Sierra Nevada as the climate changes, meaning the conditions that have caused California’s current drought are expected to arrive more frequently. And more precipitation is expected to fall as rain instead of snow, stealing away the snowpacks that act as natural reservoirs, slowly releasing moisture into human-made water reservoirs during hot and dry summer months.

And earlier this year, a study led by Berghuijs was published in Nature Climate Change showing that U.S. river flows fed by snow harbor more water than those fed by equivalent amounts of rain. The cause of these counterintuitive results is not known, but Berghuijs speculates it could be caused in part by rainwater leaching into soil, while snow often sits atop frozen ground.

Conducting more studies that improve our understanding of how climate change will reshape river flows in places like the Sierra Nevada could help governments adapt to the changes. In California, for example, that might mean chopping down more mountain trees.

“We need a sizeable investment in better information,” said Bales, who presented the results of his new paper to Californian water officials last month. “We’re operating by the seat of our pants.”