A huge storm is sitting off the coast of California like a tightly wound spring. It's pushing precipitation across the parched state, but this round of rain and snow is extremely unlikely to bust the drought that has stretched on for more than a year.

The satellite image above from The National Weather Service shows the low pressure currently coiled in a taut spiral over the Pacific Ocean. Bands of precipitation are unfurling from the center and targeting Southern California.

Other parts of Southern California will see equally heavy rain and with it, the potential for flooding and mudslides. There’s even a chance the region could see tornadoes touch down and waterspouts along the coast. 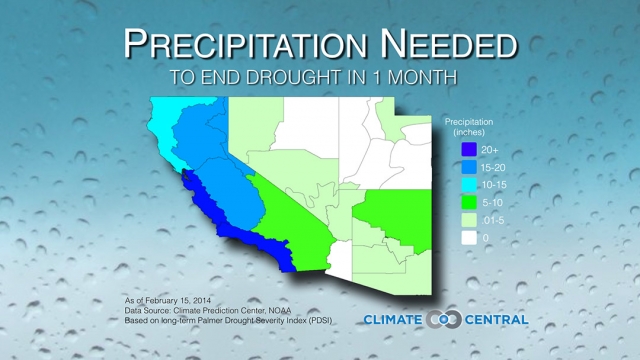 A map showing the amount rainfall needed over one month to end drought in California and other western states.

In the southern Sierra Nevada Mountains, winter storm warnings are in place as up to 2 feet of snow could blanket the region. Winds whipping as high as 80 mph will also make for potential whiteout conditions.

California still has a long way to go to crawl out of the drought. More than a quarter of the state is experiencing “exceptional drought” according to new numbers released by the National Drought Monitor. And a Climate Central analysis earlier this month showed parts of the state, including the Los Angeles Basin, need more than 20 inches of rain in the span of a month to effectively end the drought. According to the seasonal forecast from the Climate Prediction Center, the odds of that happening are slim. Like 1-in-1,000 slim.