Dwindling reservoirs, dusty rangeland and desiccated crops have left the Southwest in dire need of rain. Luckily, July marks the typical start of the annual monsoon season, and it has arrived in earnest this summer, bringing daily thunderstorms from New Mexico to southern California. A “drunken” weather pattern, with weather systems moving in the opposite of their typical direction, also contributed rain to parts of the Southern Plains earlier this month. Though this has provided some relief to the drought-parched regions, they’re not out of the woods yet, according to the latest U.S. Drought Monitor. 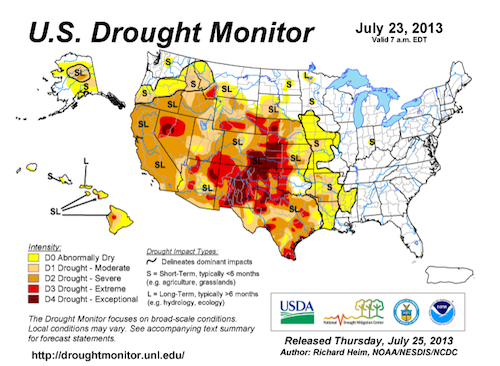 Overall, 46.55 percent of the lower 48 states is experiencing some form of drought. That’s up a fraction of a percentage point compared to last week. Dry conditions and low soil moisture make Mississippi, Louisiana, and Iowa the latest areas to see the growth of drought. A small part of Minnesota and isolated pockets in Indiana round out the new additions for drought in the Lower 48. The Upper Midwest locations are particularly important to watch as corn is entering its reproductive stage and rainfall is crucial over the next two weeks.

After suffering through a period of worsening drought since late May, the Southwest caught a break with an active kickoff to monsoon season. That season, which usually reaches the region by early July, is responsible for nearly half of the annual average precipitation that the Four Corners states receive. So far the season has lived up, and in some cases even surpassed, expectations.

Cedar City, Utah, has received 2.69 inches so far in July, well above the average of 0.57 inch. That pales in comparison to what Douglas, Ariz., southeast of Tucson on the U.S.-Mexico border, has seen. This July, 9.67 inches of rain have fallen there, putting Douglas 7.58 inches above its July average to-date.

The effects of the monsoon can be dramatic, with severe thunderstorms leading to flash flooding and dust storms, among other hazards. On July 23, heavy rain near Flagstaff, Ariz., knocked over a cement wall, sending floodwaters rushing through a mobile home park. Monsoon-related thunderstorms on July 18 in Utah caused a powerful flash flood and debris flow, which a self-proclaimed “flood chaser” caught on camera.

Not all areas have seen such dramatic impacts. The pattern, which was aided by an upper level low pressure area, can dump heavy rain in one location while leaving another entirely dry just 50 miles away. For example, Moab, Utah, has missed out on rainfall, recording only 0.18 inch through July 23, or about 30 percent of what’s expected to-date in. Also, aside from 0.47 inch on July 21, Yuma, Ariz., has had no measurable rainfall since the start of the monsoon. 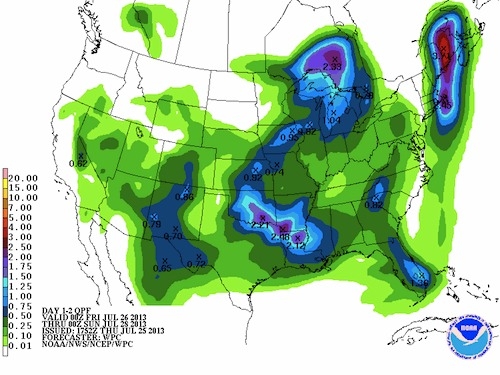 For all the benefits the monsoon has brought to some locations — such as improved rangeland for cattle and decreased wildfire risks — the Southwest as a whole is still in the middle of a long-term drought — and will not be getting out of it anytime soon. During the past week, the portion of New Mexico experiencing “extreme” to “exceptional” drought conditions declined from 86 percent to 80 percent.

A recent story on Nevada Public Radio noted that statewide water restrictions are possible by 2016 across the state due to historically low levels in Lake Mead. Reservoir levels in much of New Mexico, which remains the driest state in the nation, are also critically low.

While the Southwest enjoyed some drought relief, the Pacific Northwest appears to be headed in the opposite direction. Drought designations throughout the region were upgraded to more severe levels compared to last week, and there was an increase in wildfire activity as well. Only four large blazes burned in the region at the start of this week, but that number tripled to 12 by Thursday. One of them, dubbed the Sunnyside Turnoff Fire, has burned nearly 46,000 acres since Saturday and is only 40 percent contained. The weather doesn't appear to offer any hope to firefighters battling these and other smaller fires in the region; it's one of the only parts of the contiguous U.S. that is likely to remain mostly dry over the next week.

Related Content
Drought to Floods for Some; Dryness Intensifies in West
'Drunken' Weather Pattern Leads to Deadly Heat
8 Images to Understand the Drought in the Southwest
The Impact of the 2012 U.S. Drought: Pick Your Poison
Ongoing Coverage of Historic Drought in U.S.