Monsoon Sets Up ‘Race Against the Clock’ in Nepal

The prospect of aftershocks continue to keep Nepal on edge after a major earthquake shook the country in late April.

The magnitude 7.8 earthquake and its aftershocks have left an estimated 500,000 families homeless, more than 8,000 dead and scarred the country with at least 3,000 landslides. 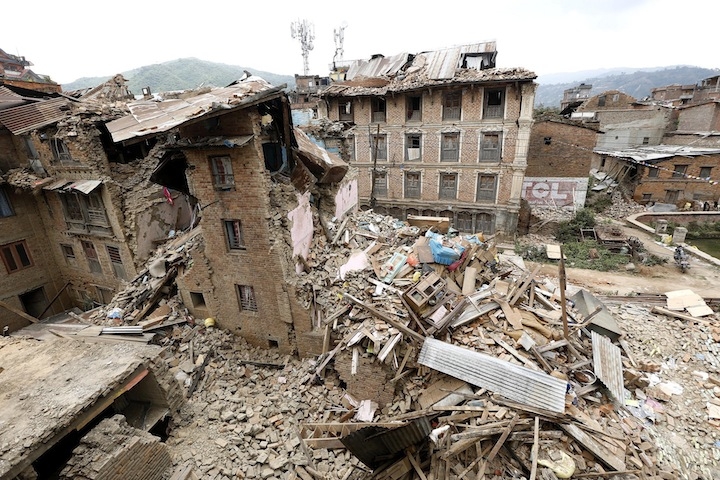 Damage in Kathmandu after the Nepal earthquake.
Credit: Resurge International/flickr

But another issue for quake-rattled Nepal is brewing in the Bay of Bengal. The South Asian monsoon is beginning its annual migration across the Indian subcontinent and it could hamper efforts to help those in need in rural, roadless areas and raises a host of new problems.

“Our goal is to make sure we provide humanitarian assistance to people that require it before the monsoon,” Leszek Barczak, a spokesman for the U.N. Office for the Coordination of Humanitarian Affairs, which is coordinating an international relief effort, said. “We are facing a logistical challenge, particularly in high-altitude villages. It is a race against the clock.”

One of the most important weather patterns in the world, the monsoon brings nourishing rains to more than 1 billion people who call India, Nepal and the surrounding countries home. It generally arrives in Nepal in the first or second week of June and lasts through the summer, bringing consistent rain with occasional bursts of heavier downpours. In Kathmandu, the monsoon drops about 34 inches of rain, though some parts of the country see far more than that depending on elevation.

Barczak said providing shelter and proper sanitation as well as educating people about the threat of certain diseases, particularly waterborne diseases such as cholera, was of utmost importance to keep the earthquake from turning into a health disaster.

“We are not predicting an outbreak of cholera, but we know the consequences if we don’t assist these people before the rain comes,” he said.

Beyond the health impacts, residents and aid workers alike will have to contend with another danger the monsoon poses to a country with dizzying topography. Elevations range from 200 feet to 29,029 feet above sea level. The shaking has jarred loose tons of debris and primed the ground for more landslides and dangerous floods.

“It’s pretty obvious there were a lot of landslides that occurred during the earthquake itself and immediately after,” Joseph Shea, a research scientist at International Center for Integrated Mountain Development (ICIMOD), said. “Together, we’ve mapped over 3,000 landslides and the big worry is that that’s not it.”

Shea is part of a team of researchers from ICIMOD, NASA, the U.S. Geological Survey, British Geological Survey and Durham University that have been using high resolution satellite images to identify landslides that have already occurred as well as where others are likely.

That imagery provides a snapshot of landslide risk, but it will take targeted on-the-ground visits to high-risk sites to determine just how likely future landslides could be. Shea said his group is helping to identify those areas and is sharing them with the Nepal government and aid agencies so they can target their relief efforts more effectively and recognize where potential pinch points might be should roads get washed out.

Thousands of miles of rivers snake through the mountainous terrain, adding another layer of risk to relief work. Monsoon rains could steer more sediment and debris into Nepal’s rivers and make even average floods more destructive. Landslides have also dammed some rivers, leaving them potentially prone to catastrophic floods should the dams fail.

While this year’s monsoon is of immediate concern, David Petley, a landslide expert at the University of East Anglia, also warned that riverbeds could be dangerous places to resettle for years to come, citing what happened after an earthquake shook Taiwan in 2006.

“As sediment moves downstream, riverbeds start to rise,” he said. “In Taiwan in 2006, riverbeds rose by 30 meters (98 feet) in some places over the next four to five years.”

While that could pose long-term problems, relief efforts remain focused on the present threats that rivers could pose. The most recent monsoon forecast — produced just days before the earthquake — indicates lower-than-normal rains are likely for much of the area affected by the monsoon, including Nepal. The still-developing El Niño further tips the odds for below normal rainfall.

Of course, forecasting the monsoon is notoriously difficult because of the region’s wildly divergent geography and numerous factors that come into play in the monsoon’s development and movement.

Petley’s previous work, which he recently wrote about for the American Geophysical Union, also shows that when the monsoon is generally weak, Nepal actually experiences more landslides. That’s because while the monsoon covers a massive geographical area, it is anything but uniform.

The divergent topography means that from one valley to the next, rainfall can be dramatically different. And even when the overall monsoon is weak, heavy rains usually still drench Nepal’s Middle Hills region, which happens to be the region most affected by the earthquake.

You May Also Like:
Kansas Takes Air Out of Wind Power Mandate
Past 12 Months Tied for Warmest on Record
Bad News Keeps Flowing From Antarctica
Texas, Oklahoma Drought ‘All But Over’