Rich and Poor Uniting in Paris, But Big Hurdles Remain

LE BOURGET, France — Hundreds of negotiators huddling in a conference center here Wednesday were preparing to work through the night to try to achieve something nearly 20 years of talks have so far been unable to do: unite rich and poor nations on climate action.

A draft United Nations pact designed to tackle the problem of runaway global warming was released Wednesday. It showed negotiators had made substantial progress, whittling an earlier draft to 29 pages from 48. Resolution on some earlier sticking points now seems virtually certain.

But on several critical issues, delegates from the developed and developing world appear to have made little progress during the last week and a half of talks. 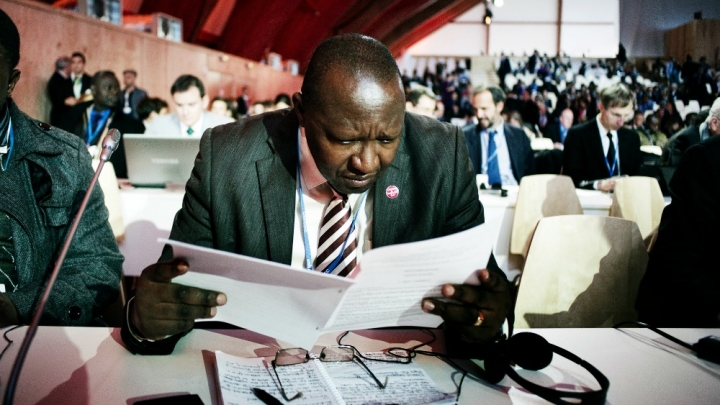 There was little agreement on whether to formally differentiate the responsibilities of richer and poorer countries to curb releases of heat-trapping pollution, nor on how richer countries would help fund the work of poorer ones as they strive to do so.

Key issues that would define how ambitious a new climate pact would be also continued to divide developed and developing nations. For example, there was no unity on whether it would address a growing desire to curb warming to less than 1.5°C, or 2.7°F, which is lower than the prior target of 2°C — roughly double the amount of warming that is already triggering floods and worsening heat waves.

Time to resolve the stubborn disagreements is running short, and negotiators took turns rattling off their long lists of concerns — some of them minor quibbles, others threatening to scuttle the talks — during a high-level meeting.

The mood at the negotiations remained optimistic, however, particularly when compared with the seemingly irreconcilable tensions that led to a weak outcome at the close of a lower-level round of talks in Lima a year ago.

“I’m optimistic that they can get to an agreement here,” said Alex Hanafi, an Environmental Defense Fund attorney who is attending the climate talks.

“The text has shrunk significantly,” Hanafi said. “You don’t want it to shrink so much that it’s basically a nothing burger, but I think there are good signs that they can get to a text that is simplified but not overly simplistic.”

Laurent Fabius, France’s foreign affairs minister who is serving as president of the negotiations, is pushing to finalize the agreement by Thursday.

That would provide time for legal vetting and multiple translations of the proposed agreement by Friday, when the meeting is scheduled to end. Previous rounds of climate negotiations have run past schedule, but Fabius has repeatedly said he aims to finish the meeting on time.

“We have to resolve these issues,” Fabius said.

The rapid emergence of a new coalition fighting for a highly ambitious pact — an informal group comprising countries rich and poor, including the U.S., European Union, Tuvalu and Gambia — raised hopes that the world would soon commit to abandoning the heavy reliance on fossil-fueled development that has defined the past 200 years.

The coalition also wants an agreement to provide a clear path forward as wealthier countries work to provide at least $100 billion a year by 2020 to help poorer ones slow and adapt to climate change. 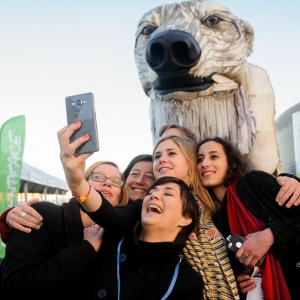 A giant mechanical sculpture of a polar bear outside the negotiating halls in Paris on Wednesday.
Credit: UNFCCC/Flickr

“There are some countries here who are not in the coalition and, indeed, who seek a more minimal outcome,” lead U.S. negotiator Todd Stern told reporters Wednesday. “But we need to press forward for ambition.”

The notable absence of rapidly industrializing nations, particularly India and China, from what’s being called the High Ambition Coalition, suggested that while rich and poor might be uniting on meaningful climate action in Paris, the club of the newly wealthy remains wary of sacrifices they fear will be demanded of them.

While other countries are ready to dump rigid divisions of responsibility between richer and poorer, which defined the largely unsuccessful 1997 Kyoto Protocol, China, India, Brazil, and South Africa were leading a fight to retain them.

The BASIC negotiating bloc, which comprises those four fast-developing nations, says it’s fighting to protect the interests of the world’s poorest countries, with which it wants to continue to be grouped in a new climate agreement.

“We are not suggesting that we remain stuck in the past,” India’s environment minister, Prakash Javadekar, said. “But a durable agreement cannot be crafted diluting historical responsibilities, or by putting the polluters and victims at the same level. How can we do this?”

But BASIC’s negotiating positions on the so-called issue of differentiation, and its reluctance to embrace more stringent and ambitious steps and goals to tackle global warming, are increasingly isolating it from the positions being taken by the majority of the world’s richest and poorest nations.

Some other disagreements that continued to linger also divided the haves from the have nots, such as a proposed loss-and-damage mechanism, which could provide support and money to help vulnerable countries cope with disasters triggered or worsened by climate change. It also remained unclear how the agreement would handle the need for communities to adapt to global warming, which is a high priority for poorer and low-lying nations.

Yet another disagreement divided the U.S. and the European Union, despite recent diplomatic breakthroughs.

Wednesday’s draft agreement contained multiple options, each of them in square brackets, characterizing how those pledges could be treated under international law.

As negotiators prepared for a tough haul to turn the draft agreement into one that could recast the global energy industry — and reshape the future of the planet, its coastlines and the wellbeing of its residents — France’s Fabius urged them to work hard.

“You need to be ready to be working overnight and tomorrow,” Fabius said.

You May Also Like:
Autumn Was Warmest on Record For Lower 48
Here’s How Much U.S. Summers Have Warmed Since 1970
Study Sees Possible Decline in Global CO2 Emissions
Astronauts Send a Message to Paris Climate Talks
Geoengineering a ‘Risky’ Bet, Scientists Warn Negotiators