Super Typhoon Haiyan left the central Philippines in ruins, with a staggering death toll that could climb well above 10,000. The U.S. military is leading the international response to the devastation, along with international aid agencies. The Pentagon has dispatched an aircraft carrier and five other Navy ships, plus a separate group of at least 90 marines and specially trained humanitarian relief teams to the area. 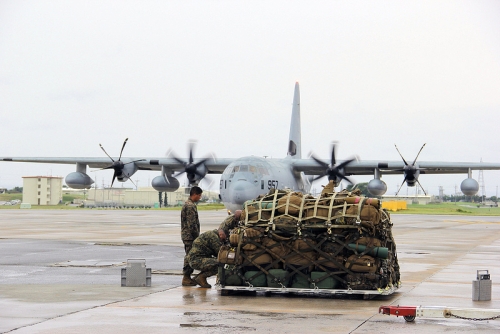 Although the humanitarian deployment is nothing new for the Pentagon, it foreshadows what many national security experts — including the Navy's top Pacific commander — see as an increasingly challenging role for the U.S. as global warming influences the power and destructiveness of storms via warming and rising seas.

Admiral Samuel J. Locklear III, head of U.S. Pacific Command, identified climate change-related impacts as the biggest threat facing U.S. forces in the Pacific, telling the Boston Globe in an interview in March that warming “is probably the most likely thing that is going to happen . . . . that will cripple the security environment.”

In recent years, numerous reports, including Defense Department assessments such as National Intelligence Council products and the Quadrennial Defense Review as well as analyses from various think tanks, have found that climate change is likely to serve as a threat multiplier by increasing the frequency and severity of extreme weather events, and reducing food production at the same time that the global population is soaring.

Studies have shown that will ratchet up pressure on many countries, contributing to regional instability. In addition, scientific research indicates that a warmer world may be more prone to violent conflicts, although the evidence on trends to date is unclear.

“Climate-fueled storms and extreme weather events will increase the demand for the U.S. Navy and other military branches for being a global 911 force,” Sherri Goodman, a senior vice president at CNA and former deputy undersecretary of Defense, said in an interview.

Super Typhoon Haiyan dealt the Philippines a ferocious blow, but the region is historically prone to strong typhoons, having been struck just last year by Super Typhoon Bopha, which killed more than 1,000.

“This (disaster) is unprecedented in its scope and strength,” Goodman said, “They’re a very vulnerable region, as is most of that part of Asia.”

In addition to natural disasters, including typhoons, small island states like Kiribati and the Maldives face an existential threat from sea level rise, which could trigger a refugee crisis for larger countries.

“While the Indo-Asia Pacific today is relatively at peace, I am concerned by a number of security challenges that have the possibility to impact the security environment,” Locklear said in testimony before the House earlier this year.

“Examples include climate change, where increasingly severe weather patterns and rising sea levels, along with inevitable earthquakes and tsunamis' and super-typhoons, and massive flooding threaten today and will continue to threaten populations in the future in this region,” he said. 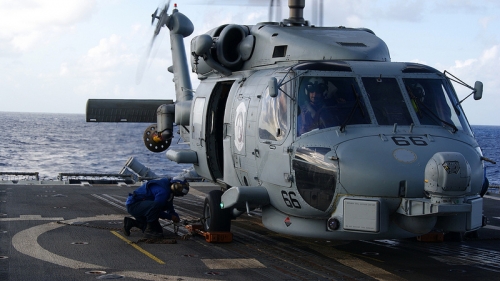 Data indicates that tropical cyclones like Super Typhoon Haiyan are one of the most frequent types of natural disaster that the U.S. military responds to, and the largest share of these storms are the Category 4 and 5 storms that research shows may be more common by the end of the century. Between 1970-2008, the military responded to 77 tropical storm-related disasters, a CNA report found, second only to floods, which triggered 78 responses.

Any uptick in strong tropical cyclones in the Pacific — or other ocean basins — could mean an increasing number of military deployments for humanitarian purposes, and assessments have found that greater instability could boost the odds that the U.S. military will be dragged into humanitarian crises that include the possibility of conflict.

According to a report by CNA published in 2010 more weather-related disasters plus a decrease in stability “might result in disaster response operations occurring in a region with security threats.”

David Titley, the former chief oceanographer for the Navy and currently the director of Pennsylvania State University's Center for Solutions to Weather and Climate Risk, said in an interview that it is likely that the demand for humanitarian assistance missions will increase in the future, due both to climate change-related trends and population growth, much of which is taking place taking place in major cities that are located in low-lying areas with poor infrastructure and little protection from rising seas and major storms.

“Living on the coast is dangerous and it’s more dangerous than we like to admit,” he said. The Navy's deployment post-Haiyan is typical of what they have been called upon to do in the Asia Pacific region, Titley said. 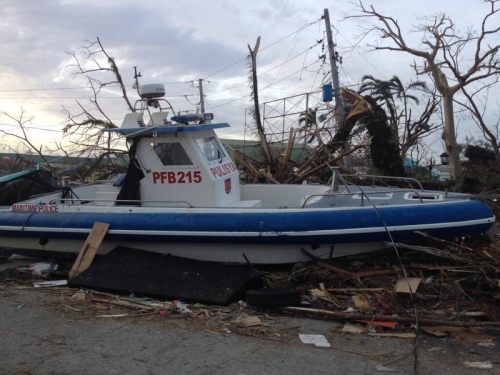 Having the U.S. be capable of responding to natural disasters like Haiyan is one way to help maintain stability in an increasingly unstable world, said Chad Briggs, strategy director for Global Interconnections LLC. Countries like the Philippines, which has a weak national government, can be destabilized in the wake of a disaster if insurgent political movements prove more capable of meeting people’s needs than the government itself.

“If the U.S. has an interest in maintaining stability then it needs to make sure that someone is able to respond to disasters,” Briggs said.

For example, the U.S. provided food and water to displaced residents from widespread floods in a restive area of Pakistan in 2010 to help support the national government, which was being challenged by Al Qaeda and other terrorist groups.

There is also significant diplomatic upside to having the Navy serve as part of a global rapid relief force.

China, which is America’s biggest rival in Asia and increasingly on the world stage, has only offered monetary donations to the Philippines because it doesn’t have the ready assets to send to the stricken areas. That has resulted in a diplomatic coup for the U.S., which has been seeking to complete a national security “pivot” to Asia during the past year, defense experts told Climate Central.

“This shows the obvious U.S. preponderance over China in certain situations,” Briggs said.

U.S. military and civilian assistance to Indonesia following the 2004 Indian Ocean Tsunami helped improve U.S.-Indonesian ties, and the response to the Philippines' disaster may also have the same side benefit for national security and diplomacy, Goodman said. “We’ve been working on strengthening relationships with the Philippines following a fairly troubled history,” she said.