This week, parts of Oswego County in New York got a stunning 3 feet of lake effect snow. It was a rare event for a February and one that can be pinned to near “rock bottom” ice cover on the Great Lakes, as one scientist put it.

Ice cover on the lakes stood at a mere 12 percent as of Feb. 11 (compared to 63 percent at the same time last year) thanks to unusually mild weather so far this winter.

Such sparse ice cover is likely to be the norm in the future as the ice continues the decline of recent decades caused by rising air and lake temperatures fueled by climate change. That could mean more late winter lake effect snows, as well as putting coastal communities and wildlife at risk from winter storms that the ice would normally buffer against. 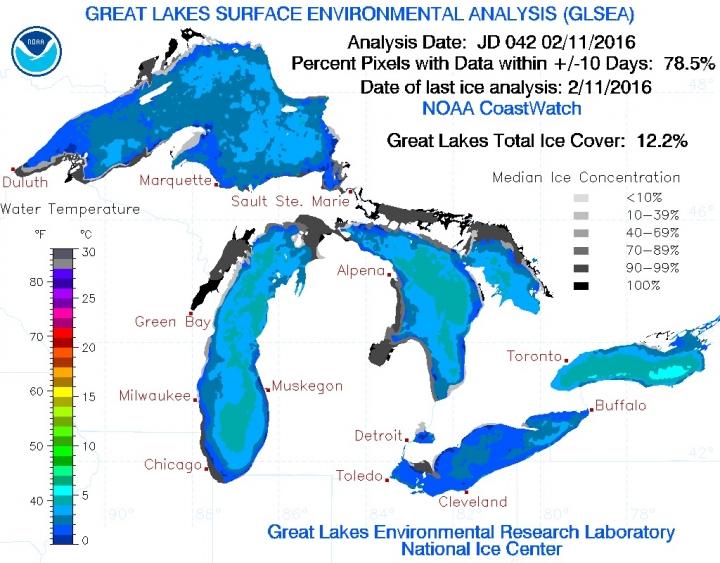 The ice on the Great Lakes typically begins to form in late fall, as temperatures begin to drop, and reaches a peak in late February. This year, unseasonably warm weather across the northern tier of the country — thanks in part to a strong El Niño — has kept ice levels low all winter.

The highest point the ice has reached so far was in mid-January, when another cold snap brought ice levels up to about 15 percent. But then the warm weather returned  “and it just went down from there,” George Leshkevich, a physical scientist at the Great Lakes Environmental Research Laboratory, said earlier this week when the ice was under 5 percent. “We’re almost at rock bottom.”

The ice cover and winter weather are both a stark contrast to the previous two winters: The 2014-2015 winter saw a maximum ice cover of about 89 percent, while 2013-2014 saw just over 92 percent, the second highest amount in records going back to 1973.

While the bitter cold this Valentine’s Day weekend is helping to bring this year’s numbers up for now, mild weather is expected to return, which could eat away at the ice again.

The warming of both air and lake temperatures thanks to the excess heat trapped by accumulating greenhouse gases has caused an overall decline in Great Lakes ice; over the period from 1973 to 2010, ice cover dropped 71 percent.

The Upper Midwest has the fastest warming winters of any region in the country, with average temperatures climbing 1.12°F per decade since 1970 and expected to rise another 5.4°F by mid-century. That means the lakes are more likely to see years with paltry ice cover like this one than blockbuster years like 2013-2014. 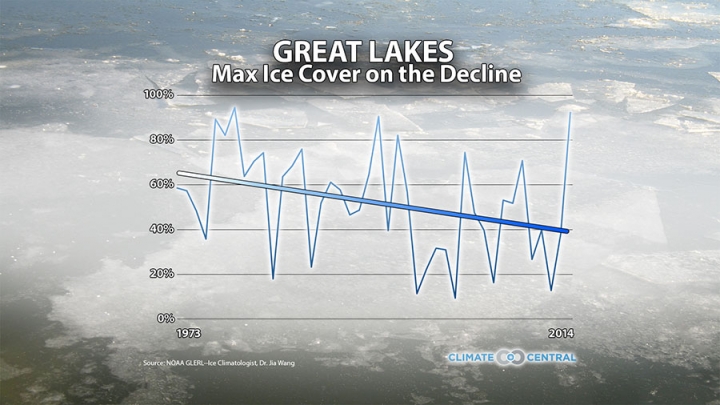 The trend in ice cover across the Great Lakes.
Click image to enlarge.

Diminished ice cover can have profound effects on the ecology of the lakes. Certain fish species, for example, need ice cover to protect their spawning beds from punishing winter storms. “So that could wipe out a season’s fish stock with no ice cover,” Leshkevich said.

The ice also protects lakeshore communities during storms by acting as a barrier to storm-whipped waves.

The lack of ice and the milder water temperatures also “means that the lake effect snow machine stays primed for launch,” Steven Bowen, a meteorologist with the reinsurance company Aon Benfield in Chicago, said in an email. That has certainly been the case this week.

Lake effect snows are typically a late fall and early winter phenomenon, as that is the time when Arctic air begins to sweep down over the country, but the lakes still retain some of summer’s warmth. The cold air picks up moisture from the lakes and dumps it as snow on surrounding communities.

Of course, the lack of ice can have benefits for some industries. “I’d imagine the shippers on the other hand are liking it,” Leshkevich said, because it means less damage to their vessels and an easier time navigating through the lakes.

Leshkevich said that “unless something changes drastically” he expects the ice cover to stay fairly low for the rest of the season, based on past El Niño years.

“But what it’ll be at maximum this year, we’re certainly not sure now,” he said.