This is the first of a two-part series about microgrids.

Hurricane Sandy and the havoc it wreaked on New York City and the rest of the Northeast in 2012 could prove to be a turning point in how people think about the way electricity is produced and distributed, particularly in storm-prone areas, with some states and cities starting to turn to what are known as microgrids.

When Sandy roared ashore last October, it knocked out power for 8.5 million people, and kept more than 1.3 million people in the dark a week after the storm hit. It seared an image of Manhattan, half lit, half dark, into the national consciousness — the nation's largest and most powerful city rendered powerless by the weather. It also jump-started a discussion about how climate change is amplifying the devastating effects of hurricanes and their storm surges. Some communities began to investigate ways to reduce the greenhouse gas emissions from coal and natural gas-fired power plants that contribute to climate change.

They also want to keep the lights on when storms do hit. 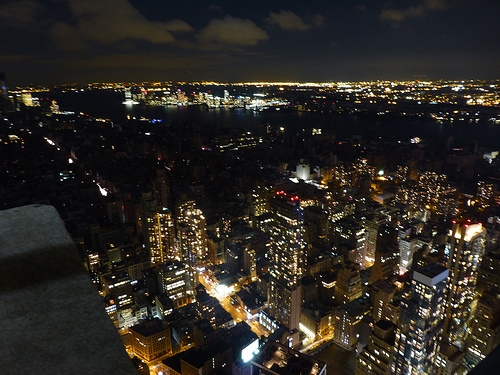 The heart of Manhattan post Hurricane Sandy was a study in contrast of those who had power, and those who didn't.
Credit: daleexpress/flickr

Sandy-shaken Connecticut is the first state in the country to roll out a statewide microgrid program aiming to maintain power for some businesses and public services when a storm roars through the state, or a blackout disrupts the power grid.

The general idea behind a microgrid is this: When power is lost across an entire area’s electric grid, some public services and critical private businesses could be linked with their own self-contained and separate electric grid, powered by electricity generated on-site or nearby. This small electricity network would operate independently from the main grid, and could incorporate a natural gas generator, a combined heat and power system, or renewables, including solar panels and wind turbines.

When the traditional power grid is down, a self-contained microgrid creates an effect called “islanding” — a network of buildings with their own power lines and source of electricity are an island in a larger area stricken by a power outage.

The idea of microgrids is catching on all over the world, particularly in the U.S., where more than 260 projects are either planned or operational, said Rick Martin, spokesman for Navigant Research, which released a study in May showing that there are 480 microgrid projects running or in the works worldwide.

The concept is both about becoming less vulnerable to storms and other power disruptions, and reducing a city’s impact on a changing climate.

“There are two kinds of aspects to a role of microgrids in the context of climate change — mitigation and reducing the emissions that are driving climate change, and then adaptation and resiliency (in the face of major storms),” said Jackson D. Morris, director of strategic engagement at the Pace Energy and Climate Center in White Plains, N.Y.

“By having your generation or a large portion of your generation to meet your load on-site, there are significant benefits,” he said. “You have some solar, small wind resources — those are zero emissions. Combined heat and power systems, those can reach efficiency levels of up to 70 or 80 percent, as opposed to the most efficient centralized power plants that are half that.”

Another benefit of a microgrid is that it mitigates “line loss,” — electricity lost in transmission along power lines — which is sometimes as high as 20 percent of the power generated when people are using the most electricity, Morris said.

“All of those megawatt hours that aren’t getting from the power plant to customers have emissions attributed to them,” he said. “There is a very real role in wide-scale deployment of microgrids in an overall emissions strategy for the grid.” 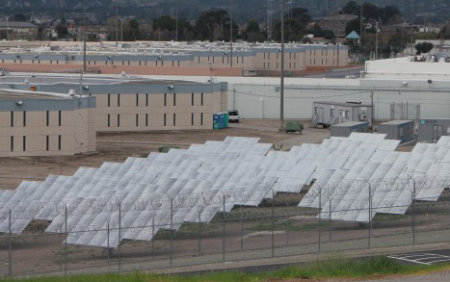 Microgrids sound simple enough, but many work in different ways. They are constructed by people with varying ideas about what they are, so their future is muddied by differences in opinion about what, specifically, constitutes a microgrid and how it should be regulated.

Regulations governing microgrids vary from state to state, but the rules in some states, including New York, often do not specify what a microgrid is, making its legal status unclear.

“You’ve got to start with a definition of what a microgrid is,” Morris said. “You ask 10 different people and you get 10 different answers.”

A microgrid could be an off-the-grid home with a solar panel on the roof. Often, it’s a university campus that owns its own power lines and generates its own power on-site. Or, it could be the entire island, like St. Thomas in the U.S. Virgin Islands, whose power grid and electric power plant are self-contained on the island.

“The definition I describe it as: a portion of the grid capable of being independently managed to achieve greater resilience in operations to reduce losses that leverages all sources of generation,” said Gerald Stokes, Associate Laboratory Director of Brookhaven National Laboratory on Long Island and president of the New York Energy Policy Institute.

A 2010 Columbia University report written for the New York State Energy Research and Development Authority (NYSERDA) about the future of microgrids in New York defined how microgrids operate in seven different ways, but said at its heart, a microgrid is a local energy system of customers and energy sources producing both electric and thermal energy operating while connected to a centralized power grid or independently from it, in an “island” mode.

Or, a microgrid could be “virtual,” the NYSERDA report said.

Virtual microgrids are connected to the traditional power grid, or the “macrogrid,” and rely on it to incorporate renewable energy sources distributed across an area, each contributing power to the larger grid, according to the report.

So far, lawmakers and regulators are generally using Stokes’ definition. That’s what Connecticut did in 2012, when the state Legislature wrote a law both defining a microgrid and creating the nation’s first statewide microgrid program, the first part of which includes nine projects totaling $18 million being rolled out over the next two years.

However regulators and investors choose to define microgrids, Hurricane Sandy has given the public, city planners and the electric power industry a reason to discuss their benefits more seriously, and it has motivated many to create solutions to the regulatory hurdles that may get in the way of building them.

“Sandy added some urgency to why the current grid we have structured may be vulnerable to increasing severe weather events,” he said. “There are significant impacts from that, and they drive attention to what can be changed by the existing system.”