Rockaways Eyeing Microgrids in Time for Next Hurricane

New York City’s Rockaway Peninsula took the brunt of Hurricane Sandy when the storm blew ashore a year ago, leaving the Rockaways in Queens devastated from flooding and 34,000 without electricity for weeks.

In the ensuing 12 months, the city has suggested many ways to make itself more able to withstand such storms. As part of New York City’s climate change response plan, “A Stronger, More Resilient New York,”  issued earlier this year, one of the city’s suggestions to help the Rockaways survive the next hurricane is for the peninsula to become the site of a microgrid pilot project that will help keep the lights on at hospitals, schools and other critical infrastructure during and after a storm. 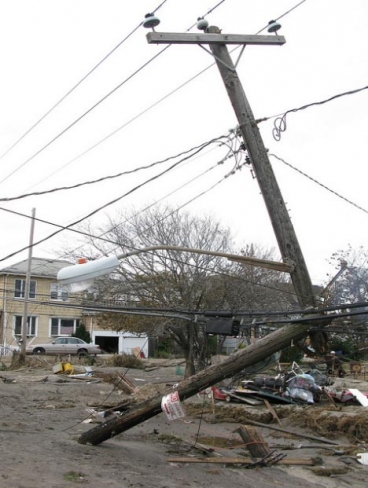 The Rockaways, which sits at the terminus of the Long Island Power Authority’s grid in the area, is ideal for a microgrid project because it’s congested and highly vulnerable to flooding during major storms with a high probability of being devastated again in a future storm, said Tom Bourgeois, deputy director of the Pace Energy and Climate Center at Pace Law School.

Generally, a microgrid works like this: When power is lost across an area’s electric grid, some public services and critical private businesses could be linked with their own self-contained power lines using power generated nearby, either using “distributed generation” power sources such as rooftop solar panels and small wind turbines, or a small centralized power source such as a natural gas power plant. Many microgrids can be “islanded,” which means they can operate independently from the larger grid when the power goes out, keeping the lights on for those who are connected to the microgrid.

“As Superstorm Sandy demonstrated, the Rockaways is a highly vulnerable densely populated area of the grid,” said Jackson Morris, director of strategic engagement at Pace Energy and Climate Center. “A microgrid that is more resilient and has the ability to ‘island’ makes it (the Rockaways) a strong candidate for a microgrid kind of approach.”

With that in mind, the city’s resiliency plan calls for its officials to work with the U.S. Department of Energy, the New York State Smart Grid Consortium and state agencies to study the feasibility of microgrids for the Rockaways and other storm-vulnerable places throughout the city.

No specific project has been announced yet and city officials declined to talk about details of what a project might look like or how long it will be before any details of a microgrid pilot project is announced.

Queens borough officials say they would welcome any proposals for projects that would help keep the power on in the Rockaways when the next storm barrels through.

“We generally support anything that protects our power delivery system,” said Michael Scholl, spokesman for the Queens Borough President’s office. “We welcome any study that investigates microgrids.”

Related Content
Microgrids: Sandy Forced Cities to Rethink Power Supply
Microgrids in NYC and Conn.: A New Kind of Power Struggle
Hurricane Sandy: Coverage of the Storm and its Aftermath