The report, produced by the Centre for Climate and Energy Solutions (C2ES), said America's shift from coal to gas had produced important climate gains. 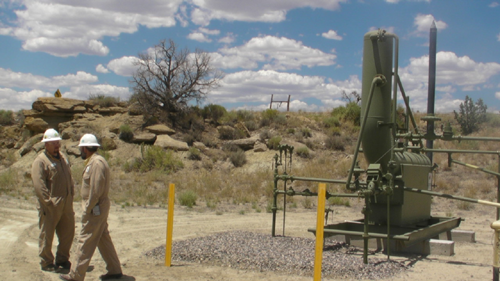 Methane is up to 105 times more potent than carbon dioxide as a greenhouse gas on a 20-year timescale.
Credit: flickr/Andrew Revkin

But the report said those reductions were not enough, on their own, to escape the most catastrophic consequences of climate change.

They were also being offset by a sharp rise in methane, the most powerful greenhouse gas on a human timescale, that was being released into the atmosphere at well sites, compressor stations and along pipelines.

Methane is up to 105 times more potent than carbon dioxide as a greenhouse gas on a 20-year timescale.

“We have to deal with the methane emissions – whether they are large, which I think is unlikely, or whether they are small,” said Eileen Claussen, president of C2ES, a Washington, D.C. thinktank.

“Natural gas is a big benefit right now, and you can see it in our emissions. But it doesn't mean that left to our own natural devices it would be a great thing in 2050 because it wouldn't be – unless you did some form of carbon capture.”

Claussen was also concerned that cheap natural gas would crowd out wind and solar energy.

America's gas boom has posed one of the most divisive in-house issues for environmental groups. The availability of cheap natural gas has retired a number of old, and highly polluting coal-fired powered plants. Natural gas emits half as much carbon dioxide as coal when used to make electricity.

Some 29 percent of America's electricity came from natural gas last year – compared to just 14 percent a decade ago, the report said. But it comes at a high cost to the local environment, because of the risks to air and water quality posed by hydraulic fracturing.

There is also a growing body of evidence that the release of methane gas from well sites and pipelines is far higher than previously thought.

Methane is a far more powerful gas than carbon dioxide, even though it persists in the atmosphere for a shorter period of time.

America would have to move towards zero-carbon energy, such as wind, solar and nuclear energy, the report said. The report also urged development of carbon capture technologies.

It said more research was needed to measure greenhouse gas emissions from methane along the entire natural gas production chain.

The report adds to growing evidence of the down sides of America's natural gas boom – beyond the widely reported contamination of local wells by chemicals used in the process of hydraulic fracturing or “fracking.”

Now a consensus seems to be slowly emerging that methane emissions have to be taken into account when assessing the real climate benefits of the switch to natural gas.

Dr. Michael Webber, the University of Texas researcher who contributed to the report, said natural gas remained a net gain for the climate. “I am hoping that the takeaway is that natural gas is a step in the right direction – but not the final step,” he said.

Others argued that more ambition was required.

“It is very much setting the bar too low just comparing it to coal,” said James Bradbury, an analyst at the World Resources Institute. “Half as much carbon dioxide compared to coal is a big improvement, but is it good enough to get us to where we need to go in terms of climate? The answer is no.”

And some environmentalists and scientists have dismissed the possibility of any climate gains for natural gas because of methane leaks. Anthony Ingraffea, a Cornell University engineer and co-author of one of the first studies flagging up methane leaks from natural gas, said it was a mistake to incorporate natural gas into a climate change plan.

“It is a wash. It is not enough of a benefit to spend hundreds of millions of dollars to expand natural gas when that money could be put to use in deployment of renewables,” he said.