Arctic sea ice has been retreating at an alarming rate due to climate change. Its loss has decreased habitat for species such as the polar bear, created problems for Arctic communities, and may even be affecting weather patterns outside the region. New research published in Nature on Wednesday adds another impact to the list, suggesting that cracks in the ice are affecting complex chemical processes in the atmosphere and causing more mercury to find its way into the region’s ecosystems.

The research was performed by Chris Moore and Daniel Obrist, both environmental scientists at the Desert Research Institute. Their research has followed the mercury from the Dead Sea to Lake Tahoe to the Arctic to see how it travels through the soil, water, snow, and air. It occurs naturally in these environments, but human emissions from burning coal also account for a growing portion of mercury around the globe. 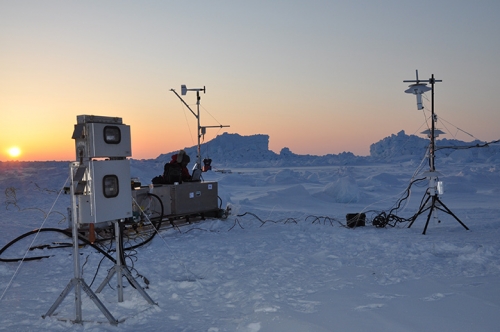 A data collection site on the frozen Arctic Ocean with instruments to measure mercury and ozone.
Click image to enlarge. Credit: Alexandra Steffen

In very miniscule doses, mercury doesn’t pose much of a problem to plants, animals, or even people. However, even slightly elevated doses can cause a wide array of health problems. And because it doesn't breakdown, it can work it's way up the food chain in higher and higher concentrations.

Moore and Obrist were collecting data on mercury in the Arctic air near Barrow, Alaska in spring 2012. Throughout winter, mercury and another chemical, ozone, in the region's atmosphere remain stable. In March, the sun returns to the region and aids a series of complex chemical processes in the lower atmosphere that deplete mercury and ozone. That process generally deposits a portion of mercury on the snow and ice.

However, it was only when they returned to the lab and began analyzing the data that they discovered that at certain points, ozone and mercury would begin to rapidly build back up in the lower atmosphere and begin the process again.

“It took us a while to think of what caused this,” Obrist said. They took their data and compared it against satellite images and local wind and weather patterns. It turned out that recent changes in Arctic sea ice were behind the shift.

Since 1981, when accurate satellite measurements began, Arctic sea ice has been retreating. Measurements during September, when sea ice is at its minimum extent, show ice has retreated by 13.7 percent per decade. One of the main drivers of that is warming in the Arctic where air temperatures have increased by 3.6°F since the mid-1960s. 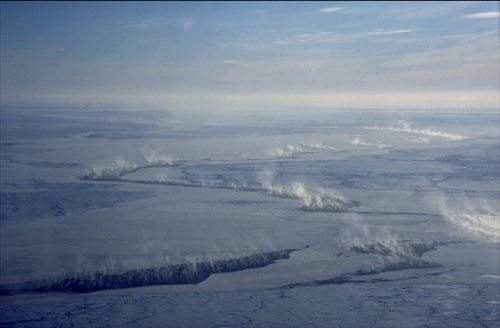 An aerial view of sea ice cracks, also known as leads, near Barrow, Alaska. Clouds are generated due to the large temperature differences between the water and air.
Click image to enlarge. Credit: Alexandra Steffen

Sea ice is not only in retreat, but it’s also getting younger. According to this year’s Arctic Report Card, 78 percent of the ice in 2013 was just a year old. In 1988, 58 percent of ice was in its first year of existence.

New ice tends to be thinner and more salty, leading to large cracks forming. These cracks pose hazards to any people or animals that might find themselves out on the ice. However, they also appear to fueling micro-weather systems that draw mercury down from the upper levels of the atmosphere.

What they found is that air swirled over cracks in sea ice saw an immediate increase in ozone and mercury and the cause was a micro-weather system. Their first thought was that the open water was helping slow depletion but that didn’t account for the increasing concentrations of mercury and ozone. They next thought the open water could be passing mercury off to the atmosphere, but that still didn’t account for ozone.

“Then we really had an “a-ha moment,’” Obrist said.

It turns out that a micro-weather pattern fueled by the warmer ocean water was behind the sudden uptick of mercury and ozone in the atmosphere.

“We have some kind of turbulent mixing in the air near the surface,” Moore said. “That turbulent mixing brings down mercury and ozone from a higher layer of the atmosphere . . . and that can participate in depletion chemistry and end up on the surface.”

Obrist said this newly discovered mechanism could mean that there are possibly hundreds of tons more mercury being deposited in the Arctic than previously thought. With Arctic sea ice projected to continue getting younger, mercury concentrations in Arctic ecosystems could also continue to rise. Moore and Obrist would also plan to explore other parts of the Arctic to see how widespread the phenomenon is and just how much mercury is being deposited across the snow and ice.

“There are other processes going on that people are studying and people also have left to discover,” Obrist said. “It really shows you that as human activities affect the Arctic or affect processes, there are unexpected consequences.”