As climate change melts permafrost in the Arctic, huge amounts of carbon dioxide and methane are released into the atmosphere, speeding global warming in the process. A new University of Cambridge study shows that by the end of the 22nd century, the global economic toll of those greenhouse gases will total $43 trillion.

The study, published Monday in the journal Nature Climate Change, shows that permafrost soils contain roughly 1,700 gigatonnes of carbon locked in frozen organic matter, which has begun to thaw as the globe warms. Until now, there have been no estimates of the economic costs of releasing that carbon into the atmosphere. 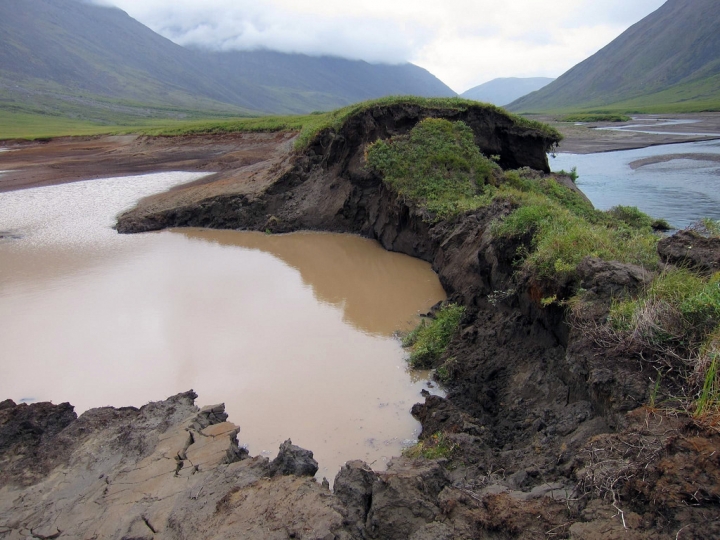 The study assumes that by 2100, humans will have stopped emitting greenhouse gases from burning fossil fuels and atmospheric carbon dioxide concentrations will have reached 700 parts per million (it reached 400 ppm globally for the first time in May).

A widely-used model estimating the social cost of carbon emissions placed the global economic price tag of anthropogenic greenhouse gas emissions at $326 trillion by the year 2200. This week's study shows that emissions from melting permafrost add $43 trillion to that total, ringing up the total cost of climate change at $369 trillion by the end of the next century.

“Thawing permafrost is likely to cause tens of trillions of dollars of additional climate impacts around the world,” study lead author Chris Hope, reader in policy modeling at Cambridge, said. “It’s the first time the economic impacts of thawing permafrost have been estimated. The impacts can be greatly reduced if we move to an aggressive abatement pathway.”

The study shows that the issues negotiators will be dealing with during this December’s COP21 international climate talks are even more severe than previously thought, Hope said.

Ted Schuur, professor of ecosystem ecology who studies permafrost carbon at Northern Arizona University, said the study is important because it links future releases of Arctic carbon to the global economy.

“Translating changes in the global carbon cycle into economic impact is vital for understanding the future costs of our actions today,” he said.

“This helps shape our understanding that absorbing costs of carbon emissions today in the form of agreements that can be worked out through efforts like COP21 may help us avoid larger costs in the future, especially from remote regions like the Arctic where changes in the carbon cycle are not under direct human control and may be exceptionally difficult to reverse,” Schuur said

You May Also Like:
Study: EPA May Be Underestimating Landfill Methane
Large Wildfires Are Now More Common and Destructive
Atlantic Storm Sets Records as 3 Others Span Pacific