The Lake at the North Pole, How Bad Is It?

The pictures are dramatic — a camera at the North Pole Environmental Observatory, sitting in the middle of what appears to be either a lake or open ocean, at the height of the summer sea ice melt season. Set against the backdrop of the precipitous decline in sea ice cover in recent decades due in large part to global warming, this would seem to be yet another alarming sign of Arctic climate change. 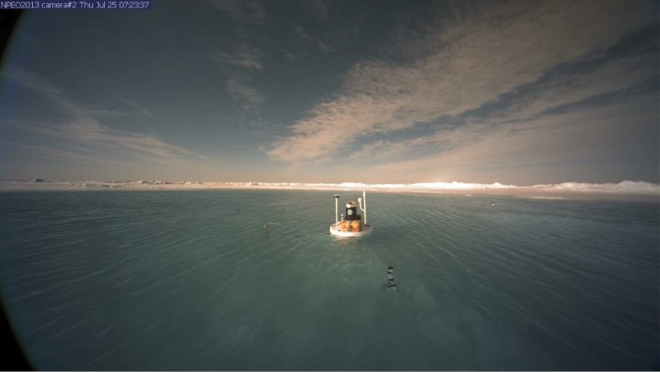 These images have attracted media attention, such as this AtlanticWire post and this Daily Mail story, both of which portray the images as potential signs of an intensifying Arctic meltdown.

But before concluding that Arctic climate change has entered an even more ominous phase, it’s important to examine the context behind these images.

First, the cameras in question, which are attached to instruments that scientists have deposited on the sea ice at the start of each spring since 2002, may have “North Pole” in their name, but they are no longer located at the North Pole. In fact, as this map below shows, they have drifted well south of the North Pole, since they sit atop sea ice floes that move along with ocean currents. Currently, the waterlogged camera is near the prime meridian, at 85 degrees north latitude. 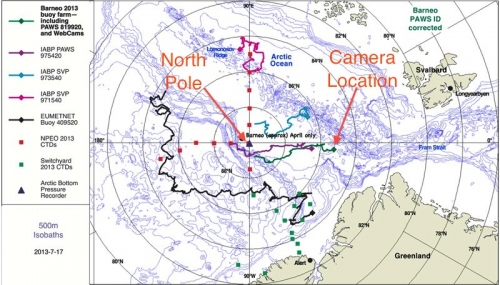 “It’s moved away from the North Pole region and it will eventually exit Fram Strait,” said Mark Serreze, the director of the National Snow and Ice Data Center (NSIDC) in Boulder, Colo., in an interview. Fram Strait lies between Greenland and Norway, and is one of the main routes for sea ice to get flushed out of the Arctic Ocean.

The second thing to keep in mind is that melting sea ice at or near the North Pole is actually not a rare event. Observations from the webcams dating back to 2002, and from satellite imagery and nuclear-powered submarines that have explored the ice cover since the Cold War era dating back several decades, show that sea ice around the North Pole has formed melt ponds, and even areas of open water, several times in the past.

The webcam depicting what seems like open water is most likely “just sitting in a big melt pond” that has formed on top of the sea ice cover, Serreze said. This melt pond started forming around July 10, and is likely close to its peak depth and extent. The occurrence of a melt pond at or near the North Pole is “just not that unusual,” Serreze said, and is even less rare at a more southern location such as where the camera is now.

“The whole Arctic sea ice cover does show melt during summer even at the North Pole,” he said, speaking of a typical melt season.

Serreze said it’s usually possible to walk through these melt ponds with hip boot waders on, as opposed to having to swim, since there is ice underneath the meltwater.


Video of images taken by the North Pole Environmental Observatory webcam during the 2013 melt season. (The pond starts to appear at 1:25.)

James Overland, a researcher at the National Oceanic and Atmospheric Administration, told Climate Central in an email that the melt pond does seem unusually large compared to what is typically observed in a melt season, though. “We have extensive melt ponds every year, but I do not remember such an extensive lake in previous years. The lake is more a product of how the ice was configured earlier in the year,” he said.

Walt Meier, a research scientist at the NSIDC, said the lake's apparently large size may be the result of snowfall totals this winter and other factors. “The pool seems rather larger than normal, but that could likely be simply due to factors other than the temperature: how much snow fell on the area over the winter (more winter snow = more melted snow), the topography of the ice (little hills and valleys in the ice causing the water to pool in certain regions), etc.,” Meier said in an email.

Arctic sea ice cover has been rapidly shrinking and thinning since the start of satellite observations in 1979. Last year, sea ice extent and volume plunged to a record low. When the melt season finally ended in late September, the Arctic Ocean managed to hold onto less than half of the average sea ice extent seen during the 1979-to-2000 period.

The past six years have had the six smallest sea ice extents since 1979, indicating that the ice has not recovered from the previous record low in 2007. Researchers attribute this to the loss of thicker multiyear ice, which has been replaced by thinner ice that forms in the fall and melts in the spring and summer.

Serreze said the thinness of the ice cover has made it much more susceptible to weather patterns that promote ice transport and melting. So far this summer, sea ice extent has tracked above that of 2012, with a slow rate of ice melt in June followed by much more rapid melting during the first three weeks of July after weather patterns became more favorable for melting, Serreze said.

“I would be extremely surprised if we were not” well below average come September, Serreze said, but the prospect of setting another record low “depends on the vagaries of the weather, and we just can’t predict that.”