May Continues Trend of Record Hot 2015

This year is still on track to surpass last year as the hottest on record, with newly released temperature data for May showing that 2015 is the warmest year-to-date in the past 135 years. 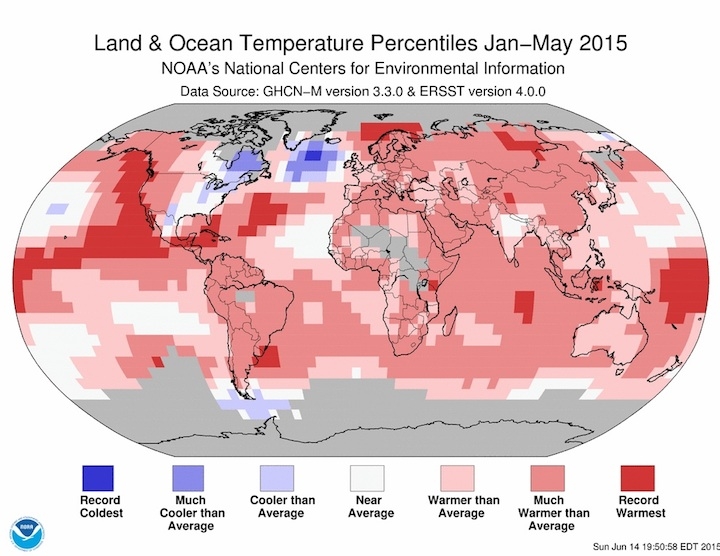 Map that shows how temperatures around the globe varied from average during the period from January through May 2015.
Credit: NOAA

The National Oceanic and Atmospheric Administration released its data for May on Thursday, coincidentally the same day that the Pope released his much-anticipated message on the need to act on climate change. The agency said that this May was the warmest May since records began in 1880, coming in 1.57°F above the 20th century average. It beat last May’s previous record by 0.14°F.

It also continued this year’s trend of months ranking among the warmest; all five months of the year so far have been in at least the top three for their particular month.

The whole period from January to May was 1.53°F above the 20th century average for that period, beating the previous record set in 2010 by 0.16°F.

What is particularly notable about this year’s records is that how much they are beating the previous ones by, Jessica Blunden, a climate scientist with ERT, Inc., at NOAA’s National Center for Environmental Information, said in an email.

The growing El Niño in the Pacific Ocean is playing a role in driving that record heat, as the climate phenomenon, most notably characterized by warmer-than-average tropical ocean waters, tends to boost global temperatures.

“I wouldn't be at all surprised if the margin of breaking records for the year-to-date continues to grow, especially if El Niño becomes as strong as some experts are predicting,” Blunden said.

If 2015 does turn out to be the warmest year on record, it will join a bevy of other years from this century atop the list. Of the 10 warmest years on record, nine have occurred in the 21st century. The only exception is the blockbuster El Niño year of 1998.

Recently, though, even years where a La Niña (which features colder tropical Pacific waters) was in place have ranked above El Niño years of the past.

It is this longer-term trend toward increasing warmth over recent years and decades that scientists emphasize, over particular monthly and yearly records.This overall trend, driven by the accumulation of heat-trapping greenhouse gases in the Earth’s atmosphere, is driving the effects the world has seen from climate change, including rising sea levels and more extreme weather events.