Massachusetts, California, Oregon, Rhode Island and Vermont are the most energy-efficient states in the U.S., according to an annual ranking released Wednesday by the American Council for an Energy Efficient Economy, or ACEEE.

The least energy-efficient states are North Dakota, Wyoming, South Dakota, Mississippi and Alaska according to the ranking, which is based on each state’s energy efficiency policies for utilities, transportation policies, building codes, appliance efficiency standards and other factors. 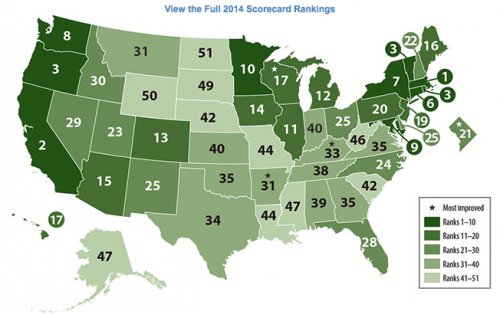 The American Council for an Energy Efficient Economy's ranking of U.S. states based on energy efficiency. Credit: ACEEE

The ACEEE, which receives funding from the U.S. government, utilities and other sources, issued a ranking in July of the most energy efficient of the world’s largest economies. The U.S. ranked 13th on that list, far behind Germany, Italy and the European Union because the U.S. resists widespread public transportation and lacks a national energy savings plan and a national greenhouse gas reduction plan.

Energy efficiency, including building codes and power plant efficiency measures, is a major part of the Obama administration’s strategy to reduce CO2 emissions from coal-fired power plants — rules that are in the process of being finalized.

States are often far ahead of the federal government in taking measures to use energy more efficiently, ACEEE state program director Maggie Molina said Wednesday during a conference call.

In 2013, the state reduced its electric power consumption over 2 percent through the use of energy efficiency measures, one of the highest power savings rates in the country.

States at the bottom of the list have not made energy efficiency a priority, Gilleo said.

“I think for laggard states, we have some great examples of states that had been laggards in the past — in the South — embracing energy efficiency as an economic development tool,” she said. 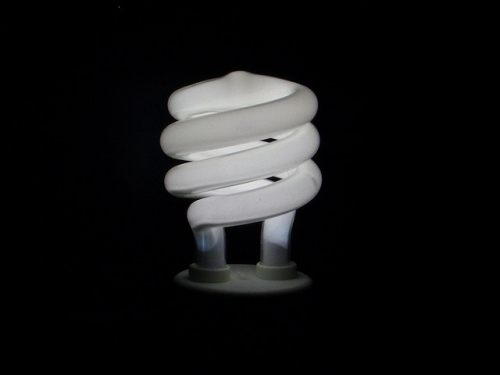 Arkansas, for example, ranked as one of the most improved states for energy efficiency. Its budget for electric efficiency programs jumped 30 percent between 2012 and 2013, tripling energy savings there, the report says.

Other states that improved the most over the previous year’s ranking were the District of Columbia, Kentucky and Wisconsin, which saw increases in energy savings.

When asked what Wyoming — ranked 50th for energy efficiency — needs to do to improve, Gilleo said the Cowboy State should embrace utility efficiency programs and new building codes.

“It is the states, not the federal government, that holds most of the energy efficiency policy levers in the country,” Kathleen Hogan, U.S. Department of Energy deputy assistant secretary for energy efficiency, said. “They’re just such great places for innovation.”