March 2014 was the fourth-warmest March on record globally, according to recently released NASA data, making it the 349th month — more than 29 years — in which global temperatures were above the historic average. 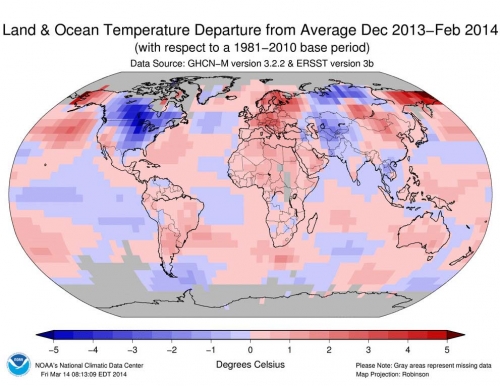 The amounts that temperatures around the world differed from the historic average.
Credit: NOAA

The planet’s average March temperature was 57.9°F — 0.7°C (or 1.2°F) above the average temperature from 1951-1980 — behind only the March of 2002, 2010 and 1990, in that order. Data is still coming in that could change the temperature deviation from this March, but likely only a few hundredths of a degree in either direction, said climate scientist Gavin Schmidt, director of NASA’s Goddard Institute for Space Studies, which compiles the temperature data.

This warm March follows on the heels of the announcements that this winter was the eighth warmest globally and that 2013 was anywhere from the fourth- to the seventh-warmest year on record, depending on which data set is used.

The warm winter period may surprise those in the U.S. who suffered through the effects of a wobbling polar vortex, but the months of December through February were 1.57°F above the 20th century average, according to the National Climatic Data Center.  Scandinavia and the Russian Far East saw extremely warm winters, and the period is actually summer in the Southern Hemisphere. Australia saw another summer of intense heat waves, though they didn’t reach the extents seen in 2013, Australia’s warmest year on record.

NASA ranked 2013 as the seventh-warmest year on record, while the National Oceanic and Atmospheric Administration ranked it fourth, though the differences between the ranking amount to less than a couple tenths of a degree. The exact rankings matter less than the clear picture of a warming world the temperature records paint, Michael Mann, a climate scientists at Penn State, previously told Climate Central.

Temperature records show that 13 of the 14 warmest years on record have been in the 21st century.

How 2014 plays out in terms of warmest year rankings is uncertain, though projections of an El Nino developing this summer or fall could bump up the average temperature, and could likely do the same for 2015, experts, including Mann, have said.