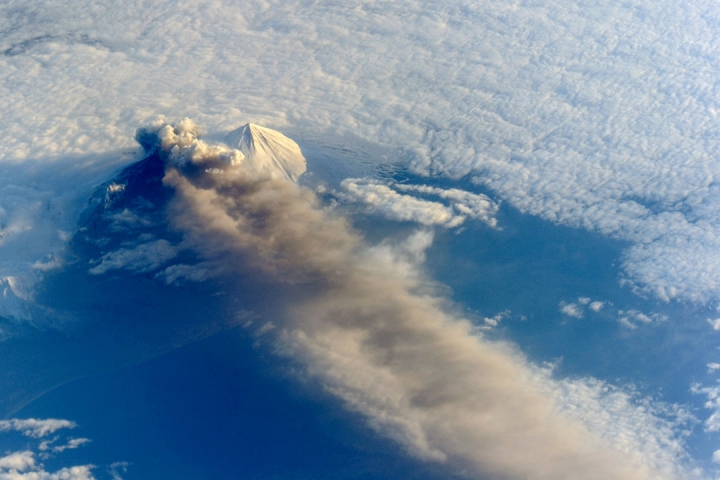 Astronauts aboard the International Space Station captured this image of Alaska's Pavlof Volcano erupting on May 18, 2013. The image is part of NASA's Tournament Earth, which showcases 32 images and data visualizations the agency published in 2013.
Click the image to enlarge. Credit: NASA Earth Observatory

The NCAA won’t release its tournament brackets until March 16, but if you’ve got March Madness fever, NASA has you covered. On Monday, NASA’s Earth Observatory started its second annual Tournament Earth. Instead of the likes of Florida, Duke, and Kansas filling the brackets, 32 images that straddle the line between data and art are vying for the title of best image on the planet.

The 32 images are divided into four brackets loosely defined as data visualization, photographs, art, and events. The odds-on favorite in the tournament is a data visualization of fine particulate matter. According to NASA, the image racked up more than 150,000 views in 2013. Of course we’re partial to the No. 2 seed in the data category, which shows the long-term trend in global warming, but there’s plenty of other amazing imagery worthy of winning the tournament. Images of bushfires burning in Darwin, Australia captured from the International Space Station and a satellite shot of wispy clouds formed by ship exhaust have the potential to be this year’s Cinderellas.

Looking through the brackets, it’s striking to see the diversity of data collected. Satellites (and astronauts, whose images are included as well) might be far from your daily thoughts, but they’re circling silently overhead, capturing countless types of data and imagery. Interested in ship pollution? There’s a measurement for that. How about tracking the Chelyabinsk Meteor through the atmosphere? NASA’s got you covered with that, too. Wind speeds in a super typhoon? Check. A bird’s eye view of an iceberg larger than San Francisco breaking away from Antarctica? Sure thing.

NASA’s tournament shows Earth at it’s most unique and beautiful moments. That said, just like March Madness, one of them has to win so go fill your bracket.