Though cool temperatures prevailed across the eastern U.S. and Canada through March, the month was the fourth warmest March on record globally, the National Oceanic and Atmospheric Administration announced Tuesday. It was the 38th March in a row with warmer-than-average temperatures. 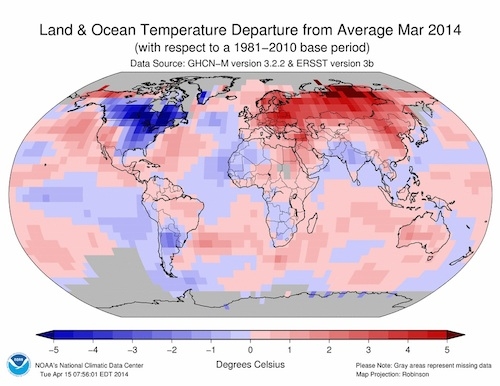 This graphic shows how much temperatures around the world departed from the average March temperature in March 2014.
Click image to enlarge. Credit: NOAA

The ranking matches that from NASA data released earlier this month, and marks a jump from February, which was the 21st warmest on record globally.

Globally, the average temperature for March was 56.18°F, or 1.28°F above the 20th century average of 54.9°F, NOAA said. While much of North America (except the western U.S.) saw cool temperatures — this March was the coolest in the U.S. since 2002 — plenty of other places saw warmer-than-normal temperatures, including northern South America, most of Europe and much of Asia.

If April is also warmer-than-average — as every month since February 1985 has been — it will be the 350th warmer-than-normal month in a row. April is also expected to be the first month in human history where the monthly average of atmospheric carbon dioxide exceeds 400 parts per million, a sign of how much the greenhouse gas has increased since the 280 ppm that marked pre-industrial levels.

The warm March came on the heels of the eighth-warmest winter on record, globally. The entire period from January to March was the seventh warmest on record, NOAA said, at 1.08°F above the 20th century average of 54.1°F.

Where 2014 ultimately falls in the rankings may depend on whether an El Niño develops later this year, something NOAA scientists have said has a better than 50 percent chance of happening by this summer or fall. An El Niño event is marked by warmer-than-normal sea surface temperatures in the eastern tropical Pacific Ocean, and is accompanied by shifts in atmospheric wind patterns. El Niño years are typically warmer than normal globally.

The global average temperature wasn’t the only sign of warming in March. The maximum extent of Arctic sea ice, reached on March 21, was the fifth smallest on record, and snow cover across the Northern Hemisphere was the sixth smallest extent in the 48-year record.

You May Also Like
‘Oldest Living Things in the World’ Tell a Tale of Climate
April Will Be First Month With CO2 Levels Above 400 PPM
Hot West, Cold East May be the Norm as World Warms
U.S. GHG Emissions at Lowest Level in 20 Years