As representatives of the world’s nations prepare to gather later this week to sign a landmark agreement to limit the human-caused warming of the planet, global temperature records continue to pile up.

Not only was March 2016 handily the warmest March on record, according to data released Tuesday by the National Oceanic and Atmospheric Administration, but the year to date has also been record warm.

Temperature departures from average for the planet for the period from January through March 2016.
Click image to enlarge. Credit: NOAA

The planet’s temperature for January through March was 1.15°C (2.07°F) above the 20th century average for the same period, according to NOAA. That puts it above the halfway mark to the stated goal of limiting warming to under 2°C (3.6°F) by the end of this century.

While an exceptionally strong El Niño has given global temperatures a slight boost, the majority of the temperature rise is due to the excess heat trapped in the atmosphere by accumulating greenhouse gases, research has shown.

This number differed slightly from those reported by NASA and the Japan Meteorological Agency, as each group has different methods for processing the temperature data. NASA put March at 2.3°F (1.28°C) above the average from 1951-1980 and the JMA reported it was 1.93°F (1.07°C) above the 20th century average.

By NOAA’s reckoning, March was the most anomalously warm month on record, measuring 0.02°F (0.01°C) above February. NASA still rated February as the record holder. The nine biggest temperature departures have all occurred within the last nine months, NOAA said.

In NOAA’s 135 years of records, March became the first time that 11 months in a row have set a monthly record, besting the previous such streak of 10 months set in 1944.

According to NASA data, March was the sixth month consecutive month that was more than 1°C above average. By NOAA’s data, it was the fourth. It’s possible that April could continue the streak. 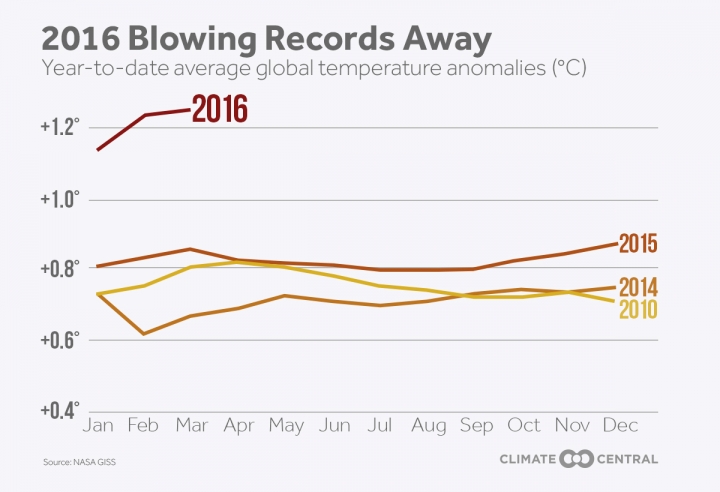 “I would say it's very likely through April, but not 100 percent for certain,” Jessica Blunden, a climate scientist with ERT, Inc., at NOAA’s National Center for Environmental Information, said.

In its monthly release, NOAA also noted that both North America and Australia had a record warm March, while the other continents (except Antarctica) were in the top 10.

For the contiguous U.S., March was the fourth warmest on record; the area is currently experiencing its third warmest year to date.

The incredible heat of the last few months has spurred speculation that 2016 will best 2015 as the hottest year on record. Whether that happens depends in part on how quickly El Niño decays and whether or not it leads to a La Niña event (which tends to cool global temperatures) later in the year.

“These extreme elevated temperatures may continue for another couple of months as El Niño continues its decline,” Blunden said. “It's really not possible to guess how the whole year will play out, especially if we move into a La Niña as many scientists seems to be predicting.”