The exceptional global heat of the past few years continued last month, with March ranking as the second hottest on record for the planet. It followed the second hottest February and third hottest January, showing just how much Earth has warmed from the continued buildup of heat-trapping greenhouse gases in the atmosphere. 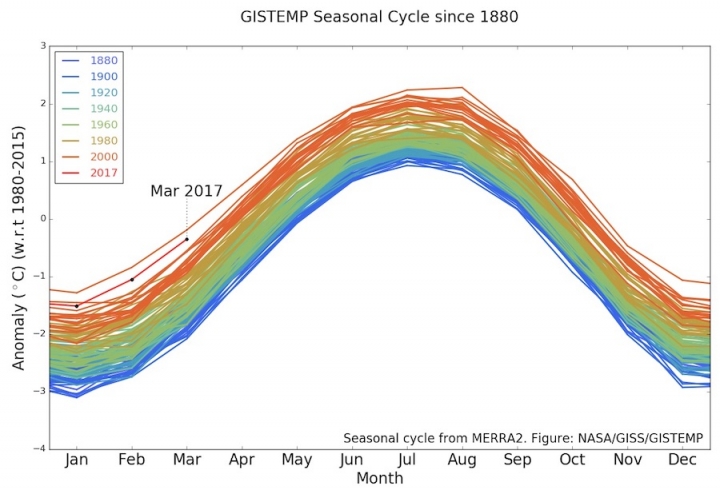 Global temperature anomalies for each month since 1880. March 2017 was the second warmest March, behind only 2016.
Click image to enlarge. Credit: NASA

While global temperatures in 2016 received a small boost from an exceptionally strong El Niño — which features warmer-than normal ocean waters in the eastern tropical Pacific  — the majority of the temperature rise is due to human-caused global warming.

Current levels of carbon dioxide — the main greenhouse gas driving up global temperatures — are unprecedented in human history, and if they continued unabated, could reach a level not seen in the atmosphere in 50 million years, according to a recent study.

Since the beginning of the Industrial Revolution, carbon dioxide levels have risen from about 280 parts per million to more than 400 ppm. Those levels are expected to top 410 ppm in the next few weeks.

While 2017 isn’t expected to top 2016 as the hottest year on record globally, in part because El Niño has dissipated (though there are some signs it could return later this year), it is still likely to rank among the hottest years, according to projections from the U.K. Met Office.

So far, global temperatures this year are on track with those projections, Adam Scaife, head of long-range prediction at the Met Office, said.

“We have said a number of times now that we would likely see three record years in a row and then another very warm, but perhaps not record year, in 2017, so the small number of data we have so far for 2017 also concur with that,” he said in an email last month. 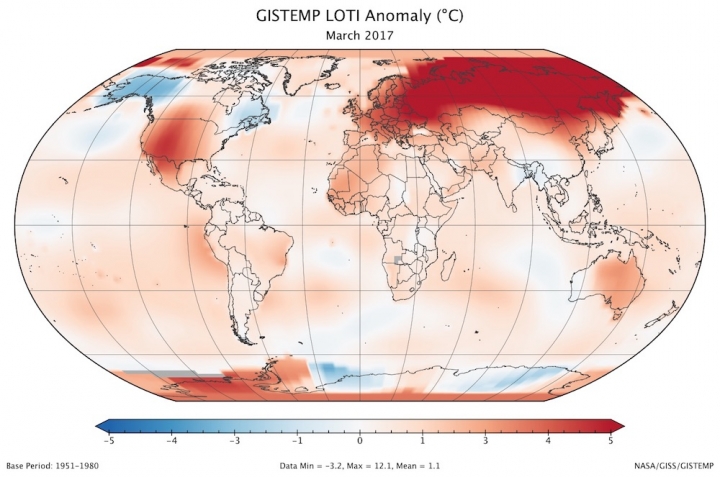 How temperatures around the world varied compared to the 1951-1980 average, with red colors denoting warmer-than-average temperatures and blue cooler-than-average. Much of the U.S., as well as all of Europe and Russia were abnormally warm.
Click image to enlarge. Credit: NASA

Of the 17 hottest years on record, 16 have occurred in the 21st century (the exception was the strong El Niño year of 1998), according to the National Oceanic and Atmospheric Administration. The five warmest years have all occurred since 2010, according to NOAA, which will release its own global temperature data for March on April 19.

So far this year NOAA’s rankings have agreed with NASA’s.