It appears that Greenland’s melt season is making up for lost time.

After a cool spring kept Greenland’s massive ice sheet mostly solid, a (comparatively) warm late June and early July have turned half the ice sheet’s surface into liquid, well outside the range of normal for this time of year.

Despite the ice sheet’s remote location, its slushy fingers reach across the globe, influencing sea levels and how fast the Gulf Stream current moves. As temperatures rise, its influence could grow larger as major summer melt events become regular occurrence. Recent warming has already contributed to ice loss in some areas previously thought to be stable and sped the trip of some glaciers into the sea.

Persistent high pressure has been camping over Greenland since mid-June. More recently, the weather pattern driving the European heat wave, dubbed an atmospheric shruggie —  ¯_(ツ)_/¯ — by Mashable’s Andrew Freedman (and an omega block by stodgy, old weather watchers), is also responsible for continuing to help keep Greenland warmer than normal.

The high temperatures in Europe have been more eye-popping, clearing 100°F from Spain to the Netherlands and setting an all-time July temperature record at London’s Heathrow Airport. But temperatures in the upper 30s and low 40s are still doing a number on Greenland’s ice sheet. Estimates from the National Snow and Ice Data Center indicate that roughly half the ice sheet’s surface is melting, well above the average of around 25 percent for this time of year.

In addition to warmer than normal temperatures, Greenland’s ice sheet has been getting steadily darker. This year currently ranks as the third-darkest on record for early July.

The darker the ice sheet is, the more incoming radiation from the sun is absorbed and the more it can melt. Water is darker than snow, but dust as well as soot from wildfires can also be swept up from far off locales and deposited on the ice sheet. It’s unclear if the wildfires currently raging in Alaska and Canada are having an impact. 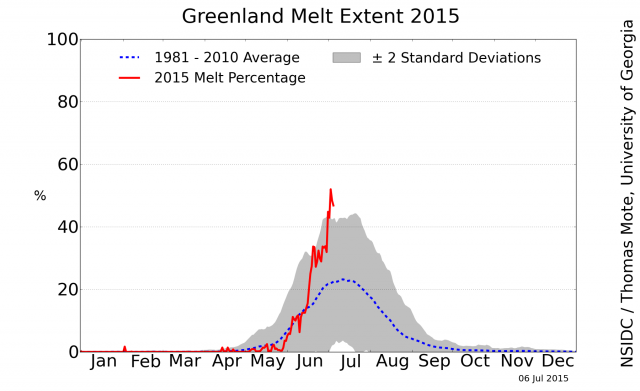 But in July 2012, a combination of soot from fires in Siberia coupled with warm temperatures caused a record-setting 95 percent of the ice sheet to melt over the course of a week. That event in turn contributed to the largest annual ice loss on record. From June 2012 to June 2013, the island shed 474 gigatons of ice, enough to cover the National Mall in layer of ice 189 miles thick.

This year’s sudden uptick doesn’t necessarily portend a similar monster melt. But rising temperatures and a corresponding increase in wildfire activity could make 2012-level melt happen yearly by 2100. More dust has also been accumulating on the ice in recent years as spring snow recedes early in the Northern Hemisphere.

With 684,000 cubic miles of ice, the complete disappearance of the ice sheet isn’t going to happen anytime soon. But any speed up in the melting could have major global consequences.

That trend is projected to continue as the planet warms and could put coastal cities at risk and cause trillions of dollars in damage.

In addition to sea level rise, the influx of freshwater could also be slowing the Atlantic meridional overturning circulation, a crucial ocean current that transfers heat from the tropics poleward. If that pattern stalls out, it could reduce nutrients in the North Atlantic and alter circulation in other parts of the world’s oceans.

You May Also Like:
The World’s Greenhouse Gas Emissions in One Graphic
2015 Arctic Sea Ice: How Low Will It Go?
Rising Ocean Temps Bring Gloomy Outlook for Corals
Hawaii, Vermont Set Ambitious Examples for Renewables