In case there was any doubt, NASA has released a reminder that this El Niño is big, likely to get bigger (maybe even record-setting) and that the weather is likely to be anything but normal through this winter for much of the U.S.

A new set of maps published by the NASA Earth Observatory show that oceans are getting close to replicating the 1997-98 El Niño that’s referred to as the climate event of the century. The maps compare sea level heights of that famous El Niño to the one currently ramping up in the tropical Pacific. 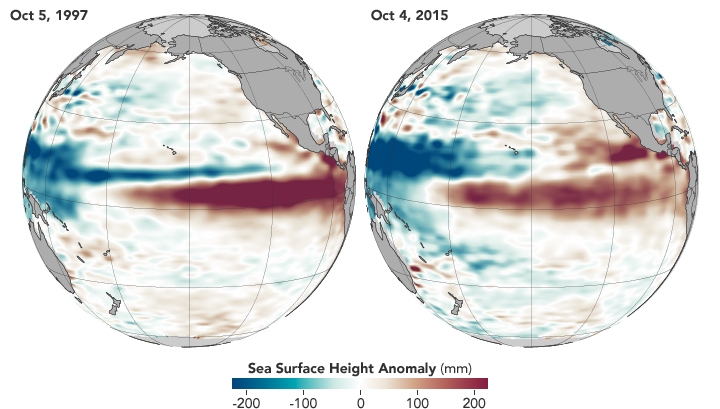 Ocean temperatures are the most common metric to define the intensity of El Niño, but ocean heights also provide a valuable measure. Red indicates where sea levels are higher than normal while blue shows areas where sea levels are lower than normal. Both El Niños show sea level anomalies of up to 8 inches across the eastern tropical Pacific (and corresponding drops in other parts of the ocean basin).

The changes in sea level can have a dramatic impact locally on coral communities, but it’s how those warmer, higher waters affect the atmosphere that really matters globally.

“Over North America, this winter will definitely not be normal,” Bill Patzert, a climatologist at the Jet Propulsion Laboratory, told NASA Earth Observatory.

El Niño generally favors rainy weather over the Southern tier of the U.S. and warm weather from Alaska through the Northern Rockies. The super El Niño in 1997-98 also helped unleash mudslides in California — a major concern this year with the state in the depth of a record-setting drought.

Of course it’s worth stressing that no two El Niños are alike. And El Niño doesn't guarantee specific impacts, but rather tips the odds in their favor.

NASA did a similar analysis in May 2014, and the results showed what many thought would be a blockbuster El Niño was brewing for the end of the year. Instead, the event fizzled before appearing at the end of 2014 and gaining strength throughout 2015.

The biggest reason 2014 fizzled is that it missed connecting with the atmosphere. However, the 2015 continuation of El Niño hasn’t skipped a beat and forecasters indicate it’s likely to strengthen through late fall and even early winter as trade winds weaken and more water piles up in the eastern Pacific.

Though the 21st century is young, it’s possible this El Niño could lay claim to the climate event of this century. Aside from, you know, that whole climate change thing.