Map Shows When Summer Heat Peaks in Your Town 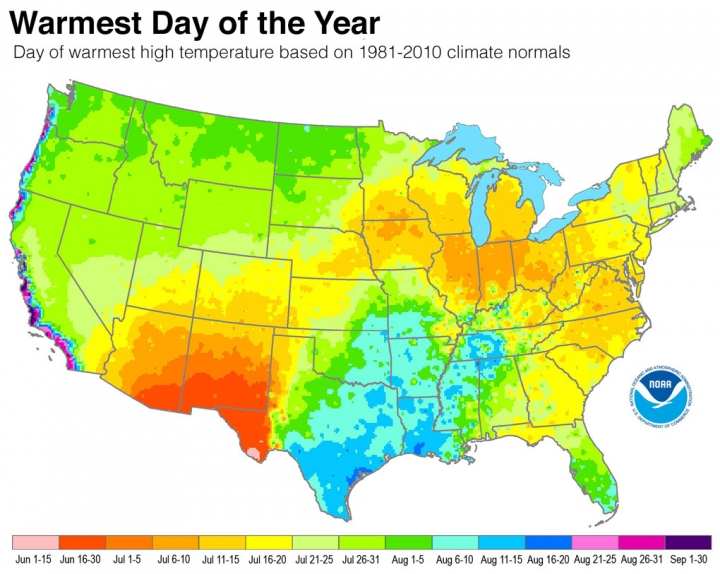 Does the prospect of a blisteringly summer hot day get you excited? Well, that's kind of odd but we'll let that slide. We'll also share some good news for you. If you live in the Northeast, the hottest day of the year is likely still to come. However, Tucsonians (Tucsonites?) who can't get enough of the city's famed dry heat will have to deal with the sad truth that peak heat has likely come and gone according to a new map released by the National Climatic Data Center (NCDC).

With the passing of the summer solstice, the days are now getting shorter in the northern hemisphere. But the dog days of summer are still ahead for much of the country, as NCDC explains:

The temperature increase after the solstice occurs because the rate of heat input from the sun during the day continues to be greater than the cooling at night for several weeks, until temperatures start to descend in late July and early August.

The new analysis and map are based on climate data from 1981-2010, what NCDC dubs “climate normals.” Most locations in the U.S. still have a ways to go before their usual warmest day of the year according to the NCDC. But there are a few exceptions.

Parts of the Southwest usually see their warmest day before the end of June. That’s because the region’s monsoon rains kick in during July and August and cloud cover helps keep temperatures a little cooler. Of course, that’s small consolation to a region where average high temperatures in cities like Phoenix and Tucson are near or above 100°F for the entire summer.

In comparison, the mercury can continue to climb all summer and peak in mid-August for locations in the neighboring Southern Plains, which doesn’t see those same rains.

The other quirky location is along the West Coast. Peak summer doesn’t really get going there until it’s fall for most of the rest of the country. Warm inland air rises over the top of cool, dense air along the coast. Those conditions set up an inversion, trapping the chill over coastal cities like San Diego, Los Angeles and San Francisco. Because that air tends to be stable, it just sits there throughout the summer months, keeping temperatures cool and leading people to utter the oft-repeated but misattributed Mark Twain quote, “The coldest winter I’ve ever spent was a summer in San Francisco.”

Eventually instability in the upper atmosphere breaks this pattern, allowing the West Coast to finally soak up some heat in late August or September.

For most of the rest of the country, the hottest day of the year is likely to come in the middle or latter half of July. And regardless of what region you live in, summer temperatures have risen since 1970 due, in part, to climate change. So mark your calendar for the hottest day of the year and clean the filters on your AC or wash your beach blanket.