It’s common for direct connections to be drawn between climate change and the effects of the devastating droughts that have been afflicting the U.S. and other parts of the world over the last decade. A new analysis led by scientists from the National Center for Atmospheric Research says there are still many uncertainties about how climate change is affecting drought globally, though.

The analysis, authored primarily by NCAR senior scientist Kevin Trenberth, concludes that more global precipitation data need to be made available and natural variability needs to be better accounted for to fully determine how climate change is affecting drought worldwide. 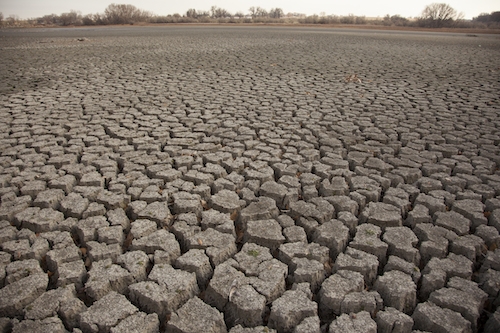 A lake near Boulder, Colo., during the state's 2012 drought.
Credit: UCAR

A variety of papers written on the matter show the limitations in scientists’ ability to determine how drought and precipitation patterns are changing under global warming, Trenberth’s analysis says.

One hurdle is that some precipitation data are either withheld by some countries in Europe and Africa or are unavailable because of lack of infrastructure. That problem can be overcome using satellites or other remote sensors, but Trenberth added that pressure needs to be applied to countries refusing to provide data so scientists can gain a greater understanding of rainfall patterns worldwide using on-the-ground data.

Natural variability also plays a large role in shaping drought, particularly the La Niña phase of the El Niño-Southern Oscillation, or ENSO, “which biases the land precipitation towards wetter conditions, and with less drought globally under La Nina conditions,” the paper says.

A study written by Georgia Institute of Technology atmospheric scientist Kim Cobb and published in the journal Science earlier this year showed evidence that both phases of ENSO may be getting more intense because of human-caused global warming.

Because of it's widespread reach, Trenberth said it is difficult to remove the effects of the ENSO to determine how drought is changing under global warming.

Trenberth’s paper concludes that changes to the global water cycle in response to global warming will not be uniform. The analysis noted that the differences in precipitation between typically wet and dry regions and seasons will likely increase, but climate change is unlikely to directly cause droughts in the near future.

“We don’t think at the current time that the climate changes are large enough to create droughts so to speak, but any time there is a dry spell, the odds are dry spells are getting longer, (and) then those dry spells are more apt to be more intense and can develop into a drought,” Trenberth said.

Research that the droughts that have plagued the U.S. for the last 13 years may be part of a larger “megadrought” presented at the American Geophysical Union Fall Meeting last week in San Francisco echoed Trenberth's message. Columbia University paleoclimatologist Edward Cook presented findings that tree ring samples indicate North America has endured droughts much more severe and longer lasting in the distant past than the dry spells the West is experiencing this century.

At AGU, Cook said it's tempting to blame the western drought on the extra carbon dioxide in the atmosphere from human activities, but it's not wholly accurate.

“There’s a lot of variability in the system that still can’t be separated cleanly from CO2 forcing on climate,” he said. “Natural variability still has a tremendous impact on the climate system.”

While scientists are teasing out the connection between climate change and drought, communities will still have to plan for their impacts. This is true in areas with recurring drought such as the Southwest but also places in the eastern U.S., where natural variability may also be behind a long relatively moist period. In states accustomed to fairly wet conditions, a shift could present a major challenge to communities unprepared for drier periods, Trenberth said.

“In 2007, there was a drought which was not outstanding by any means in the Southeast, and several states went to war over water,” Trenberth said. “Last year, 2012, the drought was very widespread and had major consequences, so this is very important.

“As we suggest, most of what’s going on is probably natural variability, then the role of climate change is to make these things somewhat worse,” he said. “In the case of drought, this is the case of where the effects of global warming build up.”

The analysis, “Global Warming and Changes in Drought,” appears in the January 2014 issue of Nature Climate Change.

Is the West's Dry Spell Really a Megadrought?