Filling the gas tank of a Hummer for $2.18 per gallon in Texas or $2.39 per gallon in New Jersey when a year ago those prices were as much as 75 cents higher means that it’s likely people will drive more, burning more gasoline and spewing more CO2 into the atmosphere, experts say. 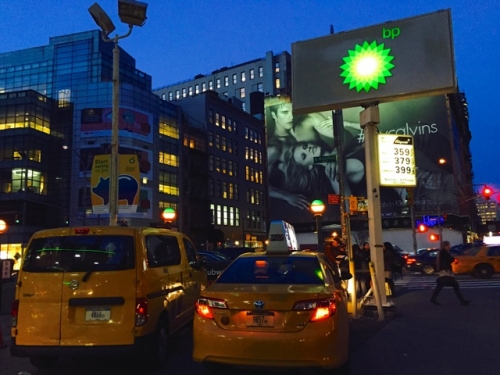 Regular unleaded was below $3.60 on Houston Street in Lower Manhattan on Dec. 4 — high for New York City, where some stations in Brooklyn were selling gasoline for $2.85 per gallon. Credit: Bobby Magill/Climate Central

Oil prices are continuing their sub-$70-per-barrel dive, and as gasoline prices fall with them, they create barriers to decreasing fossil fuel consumption and increasing fuel efficiency.

It also means the U.S. shale oil boom may slow, but not completely go bust. The shale oil boom itself is part of the reason oil prices have been in a free-fall since summer. Shale oil, through advances in hydraulic fracturing, is flooding the market with U.S. crude. Oil prices, which have fallen about 35 percent this year, are also remaining low because the OPEC oil cartel announced in November it won’t cut Middle Eastern production in an attempt to maintain global dominance as the U.S. becomes the world’s leader in pumping crude oil.

“I suspect that if oil prices remain low, the U.S. will see a reversal of its decline in gasoline consumption, which is the lowest level it’s been in 30 years,” Deborah Gordon, director of the Energy and Climate Program at the Carnegie Endowment for International Peace, said. “This would be a dramatic reversal of fortune for climate progress.”

If gasoline prices stay low, people may begin to reconsider fuel-efficient lifestyle choices and where they live in relation to where they work, said Adam Millard-Ball, assistant professor of environmental studies at the University of California-Santa Cruz.

“You might drive to work instead of taking the bus,” he said. “You might decide to take a road trip over the weekend. But in the long run, you might be more inclined to live in a place that is not as well served by transit.”

Changes in gasoline consumption and vehicle purchases are already happening.

When U.S. gasoline consumption bottomed out last January to the lowest level since 1983, Americans were burning about two-thirds less gasoline in their vehicles than they were when gasoline use peaked in 1998.

But since the cost of gasoline fell as crude oil prices began falling earlier this year, gasoline consumption has increased by about 15 percent since January, according to the U.S. Energy Information Administration.

At the same time, pickup truck and sport-utility vehicle sales are spiking. The Wall Street Journal reported this week that sales of the 17-mpg GMC Sierra are up 57 percent from a year ago, and sales of the more fuel efficient Honda Civic are tanking.

After years of high crude oil prices hovering above $100 per barrel since 2011, how people use gasoline, how much they embrace fuel efficiency and what that means for the climate depends on how volatile those prices will be, Gordon said.

But the current plunge in oil prices might force carmakers to pause future investments in fuel efficient vehicle development, at least until it’s clear consumers want to buy them based on the cost of gasoline, Gordon said.

“These lower prices are going to make the benefits of greater fuel economy lower — it weakens the case for pushing the fuel economy standards tighter and tighter,” said Alan Krupnick, co-director of the Center for Energy and Climate Economics at Resources for the Future, a non-partisan research organization. “It would diminish the push for alternative-fuel vehicles.”

The lower oil prices are also diminishing the push for fracking in the U.S.

Fracking, or hydraulic fracturing, is the process energy companies use to obtain crude oil and natural gas tightly locked in rocks that were too costly to tap more than a decade ago when oil prices were well below $50 per barrel. In many places, the oil obtained through advanced fracking and directional drilling methods are only economically viable when oil prices are above $70 per barrel.

Today, shale oil drilling and leasing in the biggest shale oil fields — the Bakken in North Dakota and the Eagle Ford in Texas — are slowing, said Texas State Geologist Scott Tinker, director of the Bureau of Economic Geology at the University of Texas-Austin.

The geology of a shale oil field is complex, with some parts of a field easier to drill and others more difficult. So, it’s possible that some companies can make money developing shale oil when oil drops as low as $60 per barrel, Tinker said.

But many companies can’t make money at such low prices, and now new applications for drilling permits are falling off, Tinker said.

Low oil prices aren’t necessarily leading to a complete collapse of the shale oil business, however, because production from existing shale oil wells is likely to continue and some companies will drill even as crude continues its price plunge, he said.

So as low crude oil prices shake up how Americans use energy, only one thing is certain, Tinker said: “How long the price will stay low is anybody’s guess.”