Local prosecutors in Massachusetts expressed alarm about the grave “crisis” of climate change on Monday, as they dropped criminal charges in a high-profile case involving anti-coal campaigners. 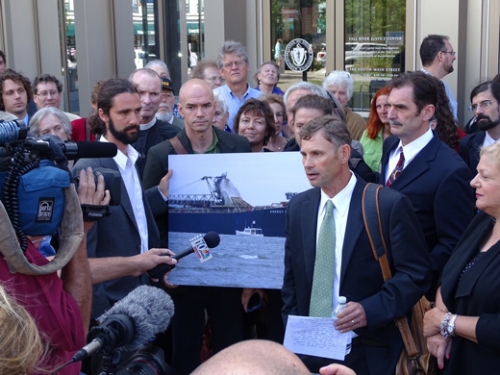 Ken Ward and Jay O’Hara were facing the threat of jail time after they anchored a lobster boat in the path of a coal-hauling ship last year, preventing it from unloading at a power plant. The protest was designed to draw attention to coal and other fossil fuels, the primary cause of global warming. Their attorneys planned to use the “necessity defense” – an extraordinary strategy that would have pointed to the urgency of climate change in justifying their clients’ actions. But, in the end, such a defense wasn’t needed.

Bristol County District Attorney Sam Sutter said the decision to drop criminal charges was made with concerns for “the children of Bristol County and beyond” in his mind. He also announced that he planned to join the People’s Climate March in New York later this month.

“Climate change is one of the gravest crisis our planet has ever faced,” Sutter told reporters and the accused's supporters outside the courthouse in a prepared statement, as he held aloft an article by prominent climate journalist and organizer Bill McKibben.

“In my humble opinion, the political leadership on this issue has been sorely lacking,” Sutter said. “I am heartened that we were able to forge an agreement that both parties were pleased with and that appeared to satisfy the police and those here in sympathy with the individuals who were charged.”

O’Hara described the outcome, which was announced on the first day of the planned trial, as surprising.

“I think it’s a good signal that when we build a movement that takes bold, prophetic action, people who know in their hearts what’s going on respond appropriately,” O’Hara said.

There was no plea deal in the case, O'Hara said. But the pair plan to pay $2,000 apiece for alleged civil infractions. That will help meet the costs of the police response to their so-called Lobster Boat Blockade. “I took this action knowing that there would be consequences with the law,” O’Hara said.

McKibben, who had planned to testify during the trial, described the outcome as “very moving.”

“Too often we’re forced to think cynically about public officials, but here was a guy who did his homework and found his heart had turned,” McKibben said. He said he thought the outcome might lead to more accused climate protesters attempting to mount similar legal defenses.

“Courts are often loath to look at the bigger picture, but this was an example of an official exercising his discretion with intelligence and common sense, and I hope we'll see more of that.”

You May Also Like:
New York to Become a Hub of Climate Hubbub
Coal Plants Lock in 300 Billion Tons of CO2 Emissions
A Tale of Two Cities: Miami, New York and Life on the Edge
Climate Change Ups Odds of a Southwest Megadrought