Listen To a Glacier, Forecast a Flood

They’re not as catchy as Vanilla Ice’s self-aggrandizing single, nor as funky as the pioneering blues of Muddy Waters. But tuning in to the harmonies produced as water courses through icy cracks in a glacier could eventually come as life-saving music to the ears of their neighbors.

Scientists recently analyzed data that was collected using seismometers during two summer months at a Swiss Alps glacier in 2007. They discovered potentially revelatory harmonic properties of ice quakes, which are minor rumbles produced when cracks in the ice are reshaped by water flowing through them. The ice quakes cause a glacier to hum in a way that’s normally imperceptible to humans. But you can listen to a sped-up version of the glacier’s amplified atonal aria here:

Gornergletscher, the Swiss glacier that is one of the largest in the Alps, produced that cryospheric cacophony. It feeds into Gornersee, a vast lake that starts filling with meltwater every spring. Gornersee drains nearly every year, sometimes in just a couple of days.

The earthen walls that dam some glacial lakes, which are growing in number and size around the warming globe as glaciers retreat, are at risk of rupturing and triggering downstream floods. When Chorabari Lake in mountainous northern India drained suddenly during early monsoon rains last year, by contrast, decades worth of meltwater was unleashed, contributing to a catastrophe.

The researchers who analyzed and remixed Gornergletscher’s vibrating signals say their findings could help forecast such glacial lake outburst floods.

“When the fluid moves through the cracks, it makes the cracks vibrate, and when the pressure inside the cracks changes, the frequency of the tremor changes,” said David Heeszel, who was a researcher at Scripps Institution of Oceanography when he led the recent research (he is now working for the U.S. Nuclear Regulatory Commission), which was published online last month in the journal Geology. “We found that individual ice quakes have spectral peaks.”

Within a single day, as a crack in the glacier shortened, the researchers discovered that the spectral peak produced by water passing through that crack rose from 120 hertz to a frequency of about 180 hertz.

By analyzing changes such as those, detected using seismometers at the surface of a mountain glacier, Heeszel says experts could track transformations underway deep below. That could allow them to track the shifting channels through which water travels as it passes from the top of a glacier, down through its bottom, and into a glacial lake. “We’re able to model these changes,” he said.

That could offer valuable clues as to when a lake beneath a glacier will fill and breach or overtop its walls, possibly giving downstream communities time to evacuate or take protective measures in advance of a looming rush of water. 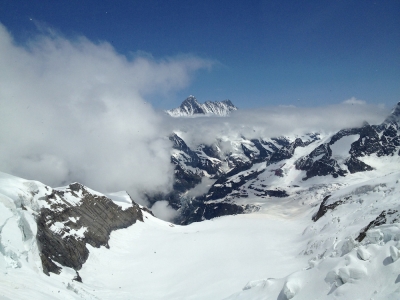 Much more work is needed before the changing tune of a humming glacier could manifest in the wailing of a flood alarm. Getting equipment and science in place to make such forecasts “would not be a trivial problem,” Heeszel said.

But Mauro Werder, a Simon Fraser University researcher who has investigated glacial lake outburst floods (GLOFs) in Switzerland, and was not directly involved with the study, lauded the research as an “important step” forward.

“Measurements of the subglacial drainage system are notoriously difficult to perform,” Werder said. “Forecasting GLOFs, in particular the timing of the drainage, is still quite some ways off. I suspect that innovative seismics methods, such as the one described in the paper, will be an integral part to such forecasting.”

Editor's Note: This story original said that Gornersee is dammed by earthen material. In fact, it is dammed by ice.

You May Also Like:
Expanding Antarctic Sea Ice is Flooding ‘Warning Bell’
Oceans Getting Hotter Than Anybody Realized
Two Years On: Sandy Inspires Storm of Climate Research
Climate Fueled Some of 2013’s Most Extreme Events