Thunderstruck: Lightning Will Increase With Warming

While severe weather like hurricanes and tornadoes typically only hit particular areas of the globe, lightning can strike anywhere. And it does, a lot. A bolt of lightning flashes through the sky and hits the ground somewhere around the world about 100 times every second. That’s 8 million lightning strikes in a single day — yes, you read that right: just one day.

Now, a new study finds that lightning strikes will become even more frequent as the planet warms, at least in the continental U.S. 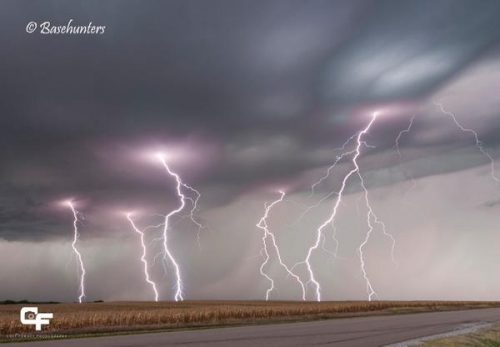 Four photos were stacked together to make this incredible image of lightning over Marysville, Kan., on Sept. 9, 2014.
Credit: Basehunters

For years scientists have been exploring how the steady warming of the planet might be impacting severe weather, though most of the attention has been placed on hazards like hurricanes and heavy downpours. And while those events are major killers, lightning is also a significant hazard. So far this year, 25 people have been killed by lightning strikes in the U.S., and lightning is the trigger for more than half of U.S. wildfires, putting pressure on human infrastructure as well as natural ecosystems.

But so far, relatively scant attention has been paid to how lightning might change as the planet’s temperature rises with the accumulation of greenhouse gases in the atmosphere. And the studies that have been done to date estimate the increase in lightning to be anywhere from 5 to 100 percent per degree Celsius rise — a strikingly wide range.

The new study, detailed in the Nov. 13 issue of the journal Science, has found a relatively simple way to use other atmospheric factors to predict changes in lightning rates. The findings suggest that lighting rates will increase 12 percent per every degree Celsius (about 2°F) rise in global temperatures. That comes to a 50 percent increase by the end of the century.

Study author David Romps, who studies atmospheric dynamics at the University of California, Berkeley, didn’t set out to study the effect of warming on lightning, but instead was trying to use lightning to “understand something about how, when, where, and why convection pops up over the United States,” he told Climate Central. (Convection is the process that drives thunderstorms.)

It just so happens that there is what Romps calls a “really beautiful” lightning dataset from the National Lightning Detection Network, which records when and where each of the approximately 20 million flashes of cloud-to-ground lightning occurs over the U.S. each year.

Somewhere during the process of exploring his initial question, Romps started to wonder if other atmospheric variables could be used to predict lightning rates. In science, “it’s rare that you end up doing what you think you’re going to do,” he said.

The particular variables he looked at can be used as measures of storm convection, the idea being that more vigorous convection is linked to more lightning. They include how heavy the rain in a storm is and how much energy is available in the atmosphere to fuel the storm’s convection.

Measurements at individual weather stations suggested these factors could say something about lightning rates, but they were fairly isolated. While he was skeptical, it was enough for Romps to start digging deeper into the data.

To start, Romps made some simple maps: One showed lightning strike data over the continental U.S. from 2011. The other combined precipitation and convection energy data for the same year (the only one for which data for all three variables was available). The two maps showed a surprising similarity, with much of the area with the most lightning also the area where the other two factors were high. 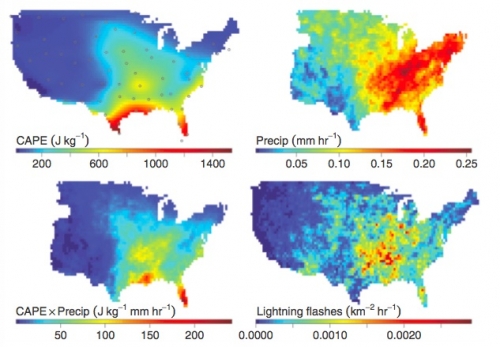 “I was puzzled by that,” Romps said. “It’s very rare in observations that you see a correlation that good, especially for three completely independent datasets.”

A graph that compared lightning with the other two factors over time was even more shocking, with the peaks and valleys of all three matching strikingly closely. Romps was, well, thunderstruck.

“That’s basically when my jaw hit the floor,” Romps said. “That’s when we knew we were really on to something.”

Romps said that match shows that using precipitation and storm energy data was “a much more robust method for predicting lightning” than other studies have previously used.

Lightning in a Warmer World

It’s also fortuitous because the latest batch of climate models from the most recent assessment of the Intergovernmental Panel on Climate Change are the first to include those two factors, meaning Romps and his colleagues could use that model data to make a prediction of the changes to lightning rates in a warmer future.

Running the data, the team found that lightning would be expected to increase by about 12 percent per degree Celsius of warming (give or take 5 percent), with about a 50 percent rise over the 21st century. Using the 20 million-strike average, that would mean some 30 million lightning strikes per year over the continental U.S. by 2100.

The results make physical sense given that both heavy precipitation and storm energy are related to the amount of water vapor available in the atmosphere and one of the main accepted results of a warming atmosphere is also a moister one. Essentially, more moisture suggests more vigorous thunderstorms and so more lightning.

Colin Price, an atmospheric scientist at Tel Aviv University and one of the few people to look at the issue of warming and lightning, said that the results of the study were in broad agreement with ones he published for the whole globe in 1994, “so I am happy to see this study supports our earlier work.”

Price, who was not involved in the new study, said that it was “not surprising” that factors investigated in this study could say something about lightning rates. “But I am sure there are many other indices and parameters that may be just as good in predicting lightning. And the proxies will very likely vary with region and season,” he said in an email.

That variation is something the new study didn’t look at, since it examined only the continental U.S. “We don’t know how that increase is distributed over the seasons or geographically,” Romps said, adding that tackling those questions are the next step in his research.