Federal oil and gas lease sales are often dour bureaucratic affairs, but 100 climate protesters hope their actions at a sale in Salt Lake City this week represent the growth of a new front in the national policy fight over global warming.

Climate activists, part of what’s known as the “Keep It in the Ground” movement, have pivoted from their successful fight against the Keystone XL Pipeline last year to protesting oil and gas leasing on public lands. 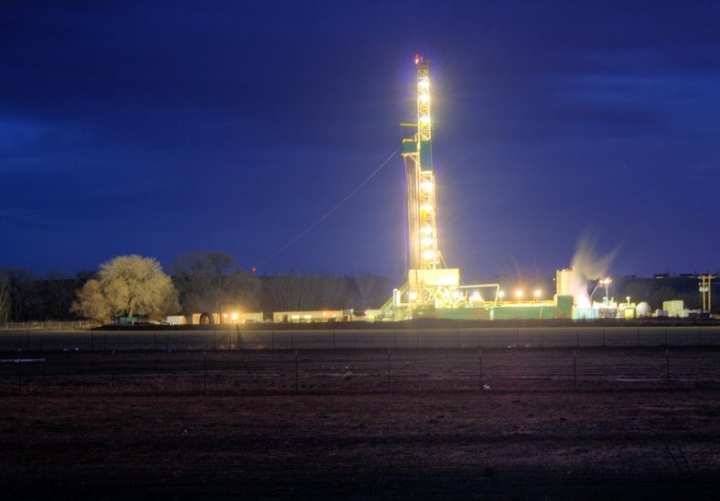 President Obama set out to seal his legacy as a global leader on climate change ahead of the Paris climate negotiations last December by announcing his Climate Action Plan, which aims to slash U.S. greenhouse gas emissions in the coming decades. To help solidify the administration’s climate credibility, the Obama administration killed the Keystone XL in November, partly on the grounds that its costs to the climate would be too great.

Earlier this month, 17 House Democrats introduced a bill called the “Keep It in the Ground Act,” which aims to stop the federal oil and gas leasing program. But because the bill has little chance of passing the Republican-controlled Congress, activists are banking on administrative action instead. They vow to protest all future federal oil and gas lease sales, including at least seven later this year.

“We will not stop until federal leasing of publicly owned fossil fuels is stopped, or at least paused while the climate risks of fossil fuel development on public lands are assessed,” said Marissa Knodel, a climate change campaigner for Friends of the Earth, one of the groups involved in the “Keep It in the Ground” movement, which organized Tuesday’s protest in Utah.

Activists have protested several recent oil and gas lease sales. Tuesday’s sale in Utah was intended to be held last fall to auction 45,000 acres of federal public lands, but it was postponed because a larger venue was needed because of high public interest. It was the third lease sale last year to be delayed for that reason.

Protesting federal leasing is an effective way for members of the public to have a voice in the future of oil and gas development in the U.S., said Jack Tuholske, director of the University of Vermont Law School’s water and justice program. 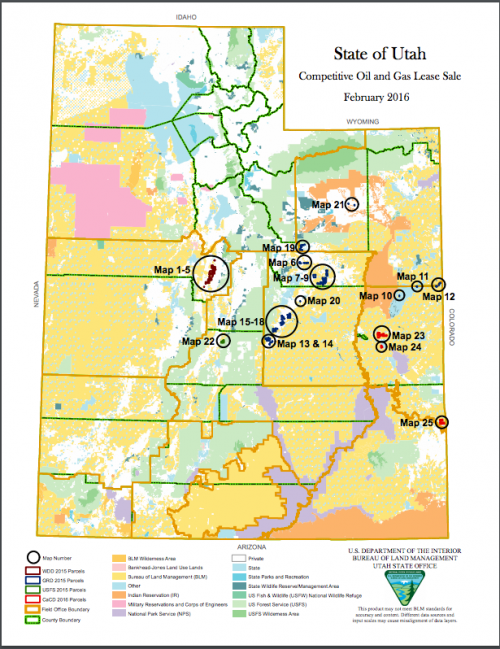 A map of the parcels of public land in an oil and gas lease sale on Tuesday.
Credit: BLM

The protests are “politically part of a broader and successful campaign to try to bring the administration around to its core belief, exemplified by killing the Keystone Pipeline and other actions, that say this president wants to leave a legacy of leaving carbon in the ground,” Tuholske said.

Other observers are less confident that the protesters will be successful in pushing for an end to federal oil and gas leasing, even as the idea gains some support in Congress.

Robert Fischman, a professor of public and environmental affairs at the Indiana University Maurer School of Law, said the “Keep It in the Ground” movement is underscoring the contradiction in federal climate policy, which calls for drastic cutting of greenhouse gases,  while facilitating oil and gas production on land the government controls.

But, he said, contradictions exist elsewhere in federal policy, including the Clean Power Plan, which discourages the use of coal for electricity generation but does not prohibit it.

Alan Krupnick, an energy and climate economist at Resources for the Future, said the government won’t likely reform oil and gas leasing until it finishes updating regulations addressing royalties earned on oil and gas leases, probably after the end of Obama’s term next year, he said.

“I don’t think the protests themselves will have any effect,” he said.

You May Also Like:
Arctic Sea Ice Is in Record Low Territory (Again)
Warming Ups Odds And Costs of Extreme U.K. Rains