We Couldn’t Monitor Larsen C Without These Satellites

The Larsen C ice shelf is about to calve one of the biggest icebergs on record.

The iceberg-to-be is hanging on by a thread, with just eight miles of solid ice standing in the way of a rift that’s spent years carving through the ice. Scientists can track the growth of the crack with precision during the summer season by flying over it, but even during the dead of Antarctic night, they’re still able to see it clearly thanks to eyes in the sky.

The evolution of the crack across the Larsen C ice shelf (seen in the lower right-hand corner) as it spreads 38 miles from January 2016-January 2017.
Credit: European Space Agency

Two European satellites, known as Sentinel-1, criss-cross over the region every six days like clockwork. Their sensors are able to see through clouds and darkness to provide a real-time image of the most-watched patch of ice on the planet.

“The close monitoring of this rift really is a success story for Sentinel-1,” Adrian Luckman, a glaciologist at Swansea University, said.

Luckman is part of Project MIDAS, a team of researchers intently monitoring the crack. He said without the satellite, researchers would only have access to low-resolution images or have to pay for data from private companies.

To monitor Larsen C, scientists are using what’s known as synthetic aperture radar. It’s particularly useful in polar regions because it can see through clouds and darkness, both of which are plentiful at certain times of the year at high latitudes. The same technology has also been used on space probes to image the surface of cloud-covered Venus.

With Larsen C likely to calve one of the largest icebergs on record, having instruments that can track it no matter the condition is crucial to improving researchers’ understanding of the polar regions. While the rift on Larsen C is likely due to natural causes, the instability that climate change is fueling in the Antarctic make these types of observations essential to know what comes next. 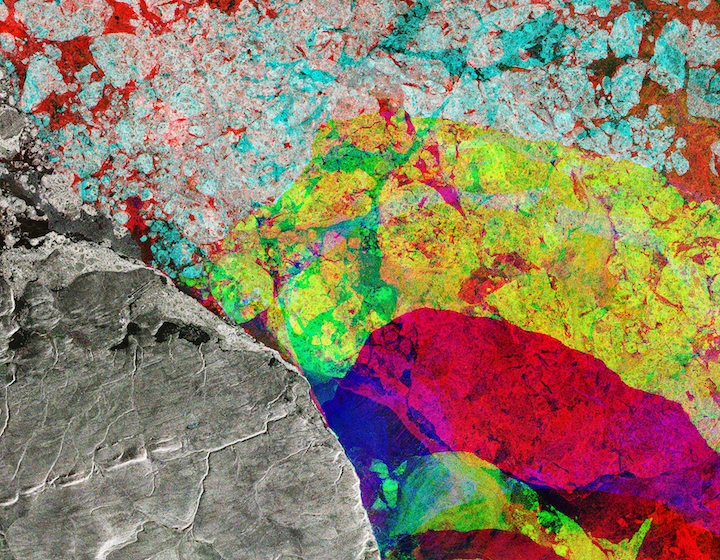 Because it’s polar orbiting, the Sentinel-1 mission also provides information on what’s happening on the other end of the planet. Climate change is taking a toll on the Arctic that’s in some ways even more dramatic. Sea ice is disappearing at an alarming clip and Greenland’s massive ice sheet and other land ice is also melting.

Monitoring changes now can help improve future predictions, but the satellites also provide important observations that can be used now in an otherwise data-sparse region.

“Their high resolution measurements are of significant value for numerous stakeholders beyond just scientists, e.g., shipping industry during the Arctic summer (and) navigation through sea ice,” Zack Labe, a PhD student studying the Arctic at the University of California, Irvine, said in an email. “I think this is a key point that we often forget. These remote sensing observations (like from the Sentinels) provide services to many industries on both land and water.”

Labe pointed to monitoring oil spills and creating forecasts for the Arctic as just two of the uses for the Sentinel-1 satellite data.

The two satellites are managed by the European Space Agency as part of its Copernicus program, which is designed to create a comprehensive monitoring program for changes around the world. There are three other missions currently in orbit and three more will be launched in the coming years.

Together, they’ll be used to monitor a wide array of planetary vital signs at a time when the world is rapidly changing due to carbon pollution.

You May Also Like:
Atlantic Oil Surveys Could Kill Food Used By Fisheries
It’s So Hot in Phoenix, Planes Can’t Take Off
Desert Basins Could Hold ‘Missing’ Carbon Sinks