The Larsen C Iceberg Is Already Cracking Up

The trillion-ton iceberg that broke off Antarctica last week will not go quietly into the night.

New satellite imagery reveals that the iceberg, dubbed A68, is already shifting shape along with the remaining Larsen C ice shelf itself.

The iceberg has traveled about 1.5 miles from the ice shelf it was formerly attached to. A piece of ice the size of Delaware moving across the choppy waters of the Weddell Sea was bound to experience an almost unbearable amount of stress. And on Tuesday, the European Space Agency showed the iceberg has begun to crack up.

The Sentinel-1 satellite captured iceberg A68 breaking up as it moves away from the Larsen C ice shelf.
Credit: ESA/Copernicus

Satellite images from ESA and the European Union’s Copernicus Program show that the massive iceberg is splintering and a constellation of smaller icebergs are surrounding it. The vagaries of ocean currents and buoyancy of ice will dictate how long the pack of ‘bergs travels together. It’s possible the smaller chunks could be the first drift north toward warmer waters in the South Atlantic where they would meet their likely demise.

What remains of Larsen C is also reacting to the powerful forces of ice and water. The floating ice shelf is the smallest it has been in recorded history, and it’s searching for a new equilibrium.

Scientists with Project MIDAS who doggedly documented the rift published new information on the remaining ice shelf on Wednesday. In it, they note that there are a number of potential follow-up icebergs clinging to the remaining ice shelf. Those icebergs will be nowhere near the size of A68, but losing them could still have grave consequences for the ice shelf.

“A new rift appears to be extending northwards and may result in further ice shelf area loss,” the scientists wrote on their blog. “Although this new rift will probably soon turn towards the shelf edge, there may be a risk that it will continue on to Bawden ice rise, a crucial point of stabilization for Larsen C Ice Shelf.” 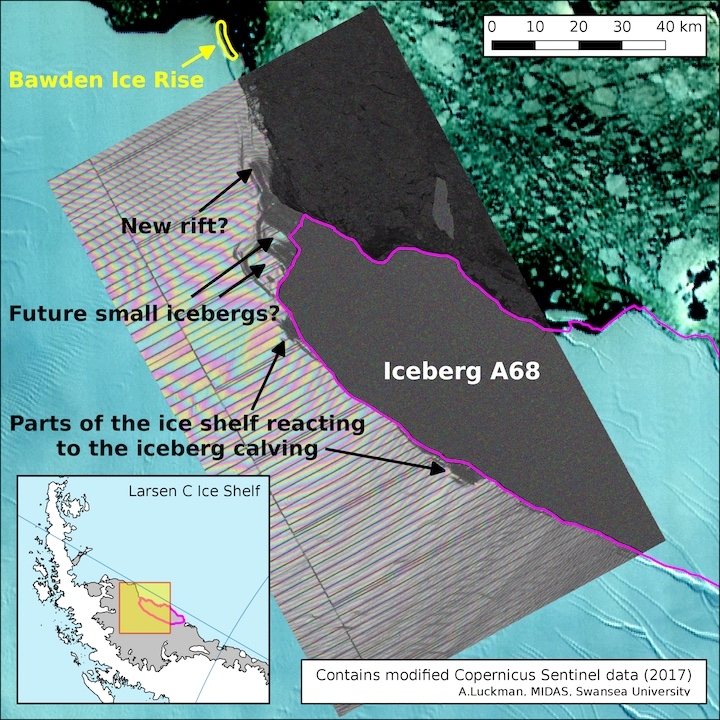 The rise is where the ice shelf climbs over an island. The Bawden ice rise along with the Gipps ice rise, a rise on the southern end of where A68 used to be attached, are both crucial points that help anchor the ice shelf.

Researchers will be monitoring changes to those rises as well as across the ice shelf to unravel what the future holds. While most scientists have said the rift that led to iceberg A68 is due to natural causes, the fate of the remaining Larsen C ice shelf — and other ice shelves that ring Antarctica — is intertwined with climate change. Rising temperatures could melt them and send land ice tumbling into the sea faster, raising sea levels around the world.

“They are lying at sea level, in the warmest part of the continent, they are sitting on salty water that melts them from below,” Eric Rignot, an ice researcher at the University of California, Irvine, said in an email earlier this month. “Warm water is the main driver (of melt) now. If warmer air is sufficient to melt the surface, then the ice shelf will break up and sea level rise from Antarctica will enormous.”

You May Also Like:
At Midway Point, 2017 Is 2nd-Hottest Year on Record
Today’s Extreme Heat May Become Norm Within a Decade
Greenhouse Gases Are Rapidly Changing the Atmosphere
Rising Temps Could Bring Flight Delays Worldwide