In the Northwest Pacific, already a hotspot for tropical cyclones, the storms that strike East and Southeast Asia have been intensifying more than those that stay out at sea over the last four decades, a new study finds.

The proportion of landfalling storms that reach Category 4 or 5 strength — the storms that wreak the most damage, as recent examples like 2013’s devastating Super Typhoon Haiyan show — has doubled and even tripled in some areas of the basin, researchers found. The increases seem to be the result of faster intensification linked to warmer ocean waters in coastal areas. 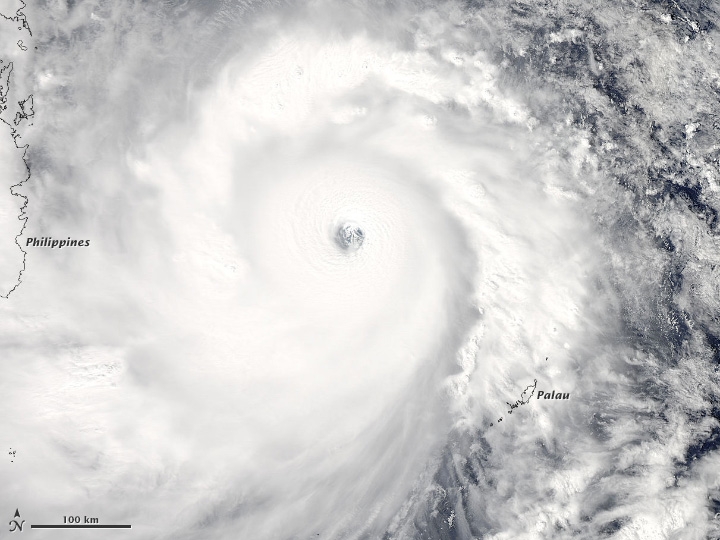 Super Typhoon Haiyan as it headed toward landfall in the Philippines, where it caused enormous destruction.
Credit: NASA

The findings, detailed Monday in the journal Nature Geoscience, are in line with the broader increase in the most intense tropical cyclones expected with rising global temperatures, though these trends have not yet specifically been linked to human-caused climate change.

The Northwest Pacific normally sees the most tropical cyclone activity of any ocean basin because of the deep well of ocean heat available to fuel typhoons, as such storms are called there.

The new work is an outgrowth of a previous study by the same researchers that found that typhoon intensity had increased basin-wide since the late 1970s and suggested that another 14 percent increase in intensity could be expected by the end of the century, as the ocean takes up most of the excess heat trapped by greenhouse gases.

Wei Mei, a tropical cyclone and climate researcher at the University of North Carolina at Chapel Hill, said that he and his colleagues were curious if typhoons in some parts of the basin were intensifying more than others. To investigate this, they grouped the typhoons into clusters based on where they formed and the paths they followed.

They found that the clusters that had the most landfalling hurricanes showed much clearer increases in intensity than those where most storms stayed out at sea. The cluster with the biggest trend had a 15 percent increase in intensity and, as part of that trend, saw the number of Category 4 and 5 storms increase from about one per year in the late 1970s to more than four per year recently.

The researchers wanted to figure out whether the higher intensities were due to the typhoons intensifying over a longer period of time or because they were doing so faster. They found that for the clusters with the biggest increases, typhoons were intensifying more than 60 percent faster since the late 1970s, but saw no major change in the rate for the others.

“The results leave little doubt that there are more high intensity events affecting Southeast Asia and China, and these are also intensifying more rapidly,” MIT’s Kerry Emanuel, who has been studying the links between hurricanes and climate change for more than a decade, said in an email. Emanuel provided some material to the researchers, but was not otherwise involved with the study.

Digging further into the possible causes for the trends they saw, the researchers linked the faster intensification rates of landfalling typhoons to higher ocean temperatures in coastal areas. Those warmer waters were ratcheting up the potential intensity of storms, or the theoretical maximum intensity they could achieve given the particular ocean temperatures and atmospheric environment. (Other factors, such as dry air or wind shear, often keep storms from reaching that potential maximum.) 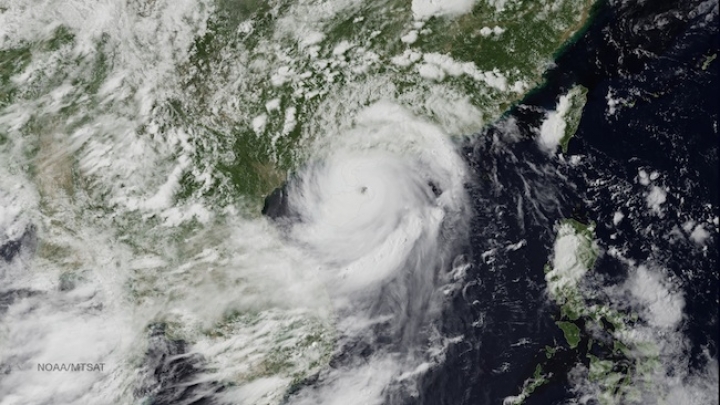 Typhoon Rammasun's eye was over the northern part of China's Hainan Island when this image was taken by the JMA MTSAT-2R satellite on July 18, 2014. The typhoon underwent rapid intensification before making landfall.
Click image to enlarge. Credit: NOAA/MTSAT

Effectively, the higher potential intensity allowed for deeper convection — the engine at the heart of tropical systems — and therefore more rapid intensification. (The results also jibe with other work that has shown a poleward shift in where potential intensities reach their peak, effectively suggesting that the tropics are becoming less favorable to such storms and higher latitudes more favorable.)

But what is causing the warmer oceans along the coast is not yet clear. The higher water temperatures could be due to climate patterns that vary naturally, climate change-driven warming, or some combination of the two.

“With such a short record it is impossible to distinguish between natural decadal variability and [any] anthropogenic signal,” Suzana Camargo, a hurricane-climate researcher at Columbia University’s Lamont-Doherty Earth Observatory, said in an email. “It will be important to do more studies to try to sort out this issue.”

Mei said that he and his colleagues hope to do an attribution study using climate models to see if they can pinpoint any role of warming in the trends they have observed.

Climate models do suggest, however, that warming will continue in these ocean regions, the study researchers note, which would suggest that even more landfalling typhoons would fall into the highest categories and would undergo more rapid intensification. This is of great concern because of the enormous damage these storms can do, as well as the difficulties forecasters still have in predicting when storms will quickly intensify.

“Even with perfect forecasts, intense storms tend to have the biggest impacts,” Camargo said. “If you compound [that] with forecast problems, then it's even a bigger issue.”