Inland states and some along the Southeast coast are doing less than most other states to prepare for natural disasters influenced by human-caused climate change, a Columbia Law School report says.

The report, which ranks the states based on how their federally mandated hazard mitigation plans address climate change, shows that land-locked states are doing the least to prepare for climate change, while many coastal states vulnerable to sea level rise and storm surges are doing the most to prepare. The plans are required by the Federal Emergency Management Agency in order for states to receive federal disaster mitigation funding. 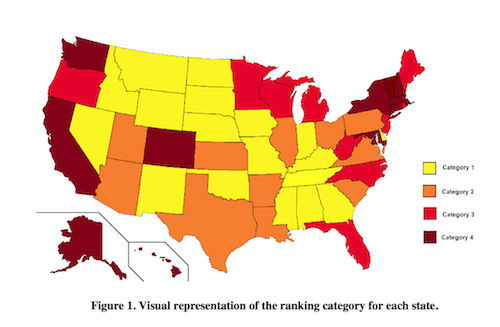 Coastal states have been the quickest to develop plans for dealing with climate change-related disasters and hazards becuase of increasing awareness of the relationship between sea level rise and climate change, the report concludes. The results showing that inland states' hazard plans do not discuss climate change suggest that there is a need to better communicate the connection between climate change and drought, extreme heat and flooding, the report says.

At the top of the list of most-prepared states is California, whose hazard mitigation plan includes a thorough description of climate change, the risks it poses and how the state will have to adapt. Colorado and Vermont ranked highest among the best-prepared land-locked states.

“Climate change is already affecting California,” said Lori Newquist, spokeswoman for the California Office of Emergency Services. “Climate impacts threaten not only public health and safety, but also billions of dollars of real estate are at risk due to increasing climate change hazards.”

“By identifying the most thorough plans that have been prepared, we hope to provide planners in other states with models that can serve as a place to start in upgrading their own plans,” said Michael B. Gerrard, director of Columbia University’s Center for Climate Change Law, which conducted the survey.

Since the data was gathered, about half the states have begun revising their hazard mitigation plans. Some revisions that have been completed are not accounted for in the survey, he said.

The hazard mitigation plan for Colorado, the only Western land-locked state the report ranked in Category 4, focuses on how climate change could have a significant impact on drought and water resources in the state. Colorado has recently experienced numerous climate change-influenced extreme weather events, including a withering drought, the state’s two most destructive wildfire seasons in its history and catastrophic flooding. 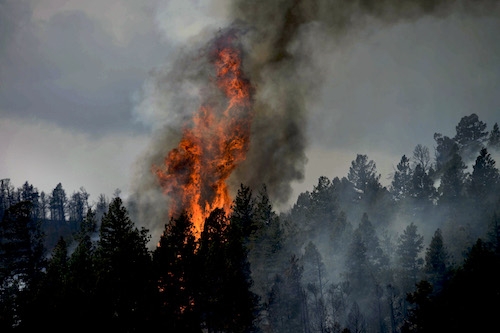 A wildfire burns in Colorado in 2012.
Credit: U.S. Dept. of Defense

“The example of Colorado shows that climate-related hazards are not only coastal; land-locked states have their own hazards, and there are ways to anticipate them and plan for them,” Gerrard said.

New Mexico’s plan “mentions climate science only in terms of El Niño/La Niña cycles,” the report says, adding that Wyoming’s plan says modeling should be used to forecast future events, but it does not mention climate change explicitly.

Some states whose hazard mitigation plans mention nothing of climate change are among the most vulnerable. Georgia, which the National Climate Assessment says could experience heavy floods, extreme heat and other severe weather in a changing climate, mentions many of those hazards in its plan without discussing them in the context of climate change.

“In some states, the phrases ‘climate change’ and ‘global warming’ are politically toxic, and state officials may wish to keep their heads down,” Gerrard said. “This is unfortunate because without explicitly acknowledging anticipated trends, and the fact that the future will not resemble the past, states are unable to engage in rational planning. Other states may just be devoting such limited resources to disaster planning that they do only a perfunctory job on their hazard mitigation plans. By shining this light on the best- and worst-performing states, we hope to induce at least a few states to improve.”

One of the survey’s worst performers was Delaware, a low-lying coastal state vulnerable to climate change-driven sea level rise and storm surges. The new report says Delaware mentions nothing of climate change in its hazard mitigation plan. Glenn Gillespie, deputy director of the Delaware Emergency Management Agency, said that the matter is being addressed. 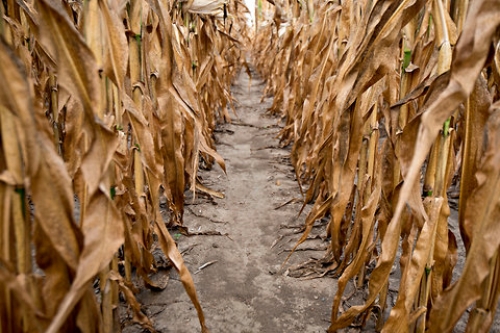 One of the worst droughts in U.S. history gripped the nation beginning in 2012.

“Columbia Law School contacted us about eight months ago requesting a copy of the State Mitigation Plan,” Gillespie said. “I cannot remember the name, but we sent them a sanitized version of the 2010 Plan. The 2010 Plan made no reference to climate change and sea level rise. At the time, I was updating the state plan to include data on climate change and sea level rise.”

Addressing climate change is complicated in Alabama, he said.

“Certainly, while I recognize some of the other states and looking at what their climate initiatives are, we really don’t have the staff here in our agency to do in-depth research on the cause and effect,” Faulkner said, adding that other states, particularly Colorado and California, have hazard mitigation plans that encompass areas outside of emergency management.

“While I’m supportive of those, we don’t have direct control over those,” he said.

A hazards mitigation plan is most effective when it stays away from ideology and focuses specifically on verifiable data to which emergency management officials can react, Faulkner said.

“We try not to make the plan into something that’s a divisive document,” he said.