LONDON – They may not look very appetizing, but they are what sustains much of the marine life in the southern ocean. Antarctic krill, usually less than 2.36 inches long, are the primary food source for many species of whale, seal, penguin and fish. 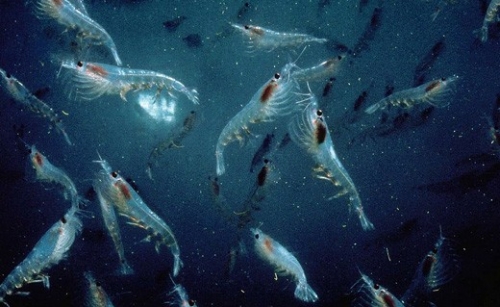 Krill, the foundation of the Antarctic marine food chain, may be at a greater risk in warmer seas.
Credit: flickr/Norkrill

But there’s a problem: the waters round Antarctica are warming, and it looks as if they will probably continue to do so. If they do, a team of UK researchers says, the area where the krill grow could shrink by a fifth.

It is the fact that krill are known to be sensitive to sea temperature, especially in the areas where they grow as adults, that prompted the scientists to try to understand how they might respond to the effects of further climate change.

Using statistical models, a team from the British Antarctic Survey and Plymouth Marine Laboratory assessed the probable impact of projected temperature increases on the Weddell Sea, Scotia Sea and Southern Drake Passage, the area of sea between Cape Horn and Antarctica, which is known for its abundance of krill.

The sea surface in this area has warmed by as much as 1°C over fifty years, and projections suggest the warming could increase by another 1°C by the end of this century.

The scientists’ models are based on equations which link krill growth, sea surface temperature, and food availability. An analysis of the results, published this week in the online journal PLoS One, the Public Library of Science journal, suggests that continued warming could reduce the area where the krill grow by up to 20 percent.

In early life krill need deep water with low acidity and a narrow range of temperatures for their eggs to hatch and develop successfully. The larvae then feed on algae on the underside of sea ice.

The adults require suitable temperatures and enough of the right type of food (larger phytoplankton) in order to grow and reproduce. Many of these critical features (temperature, acidity, sea ice and food availability) could be affected by climate change. 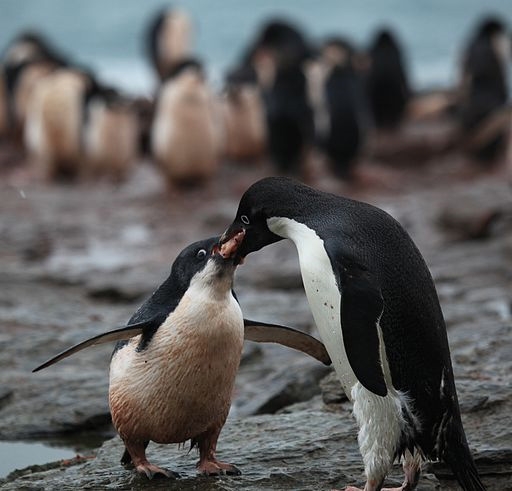 An Adelie penguin on the South Orkneys regurgitates krill for its chick, an important food source threatened by warming seas.
Credit: Liam Quinn/Wikimedia Commmons via CNN

The projected effects of warming are not evenly spread. The island of South Georgia is in the area likely to be worst affected. Here the reduction in krill habitat could be much larger – as much as 55 percent.

The island is home to a range of animals such as fur seals and macaroni penguins that depend upon krill, and others, such as black-browed albatrosses, which eat substantial amounts of krill as well as fish and squid.

The researchers say animals which don’t travel far to forage, like fur seals, would be most affected by the projected changes.

Krill is also caught commercially, though the researchers say there is nothing to suggest that current catch levels are unsustainable. In fact, at less than 1 percent of estimated biomass, catches are much lower than with most other commercial fisheries.

But the Antarctic krill fishery took 68 percent of the total catch made between 1980 and 2011 from the area of projected habitat damage. The scientists suggest improving management systems so they ensure that the fisheries take into account both the growing demand for catches and the effects of climate change.

The lead author, Dr. Simeon Hill, a marine biologist at BAS, said: “Each year, the growth of Antarctic krill in the southern ocean produces new material that weighs twice as much as all the sugar produced in the world.

“Krill grow fastest in cold water, and any warming can slow down or stop growth, reducing the food available for wildlife. Our research suggests that expected warming this century could severely reduce the area in which krill can successfully grow.”

Although there is evidence that warming seas pose a threat to Antarctic krill habitats, the researchers believe the risk can be reduced if effective fisheries management systems are in place.