The proposed Keystone XL Pipeline and the greenhouse gases that would be released because of it have been at the heart of the debate over whether the pipeline should be built in the U.S. since it was first proposed in 2008.

The U.S. State Department estimated in its final environmental review of Keystone XL that the pipeline would lead to the emission of between 1 million and 27 million tons of carbon dioxide annually, but won’t significantly worsen climate change. 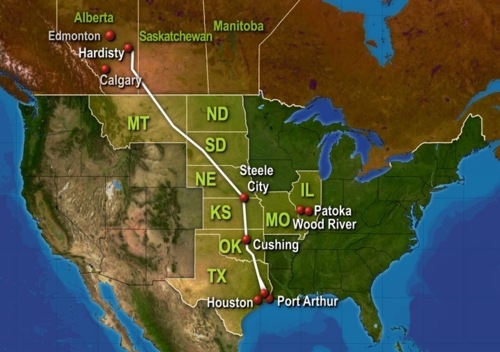 A new study published Sunday in the journal Nature Climate Change says the State Department may have underestimated the pipeline’s CO2 emissions by as much as four times. That’s because the consumer demand for oil will rise as new crude oil coming on the market from of Keystone XL will drive global prices down, the study says.

Peter Erickson and Michael Lazarus, both researchers at the Stockholm Environmental Institute, a research affiliate of Tufts University, said in their study that the State Department did not account for an increase in crude oil demand sparked by Keystone XL.

“The most important difference between our analysis and the State Department’s is that we consider the price effects of adding oil supply (in this case, Canadian oil sands) to global markets,” Erickson said via email.

The researchers found that for every barrel of increased crude oil production in the Canadian tar sands, global oil consumption could increase 0.6 barrels because the additional oil on the market would cause a decrease in global oil prices.

Depending on how much new oil production Keystone XL allows, the net yearly impact of the pipeline may range from nearly zero to 110 million tons of CO2 emissions each year — a range four times wider than that forecasted by the State Department, the study says.

The State Department’s position on Keystone XL, which is expected to pump 830,000 barrels of oil per day from Alberta to Texas, is that it will have an impact on climate change, but a much smaller one than if the pipeline isn’t built. That’s because Canada will find other, more carbon-intensive ways of getting that oil to refineries, such as via rail or other pipelines to the Canadian coast.

Danny Harvey, a University of Toronto professor whose research focuses on energy and climate change, said the paper shows strong evidence that the climate change effects of Keystone XL would be significant if it’s built.

He said he is “baffled” by the State Department’s conclusion that Keystone XL will have a minimal impact on the climate, and that he doubts the department’s statements that rail and other pipelines are likely to be sufficient to make up for the lost oil transporting capacity of Keystone XL if it isn’t built.

Erickson said his findings that oil demand and CO2 emissions will increase because prices will fall because Keystone XL will bring more oil to the market are often overlooked.

“The question of whether the pipeline will ‘significantly exacerbate the problem of carbon pollution’ may therefore hinge on this impact,” he said, quoting a statement from President Obama.

The Obama administration has put a final decision on Keystone XL on hold indefinitely, but it will likely come after the November general election.

You May Also Like
87 Cities, 4 Scenarios and 1 Really Hot Future
See Power Plants Most Vulnerable to Flooding
Odds of El Niño Drop; Still Expected to Form
Has Your City Reached its Peak Heat Yet?