Obama’s Keystone XL Veto Not a Death Blow to Pipeline

President Obama on Tuesday vetoed the bill Congress passed this month forcing approval of the proposed Keystone XL Pipeline. But the project isn’t dead yet, and the U.S. State Department’s long approval process for the Keystone XL continues.

The bill, an effort by Congress to override the State Department’s protracted environmental review of the pipeline, would have authorized TransCanada to build the $8 billion Keystone XL along 875 miles of U.S. soil from the Canadian border in Montana to Steele City, Neb., where the oil would have been piped to refineries in Texas. 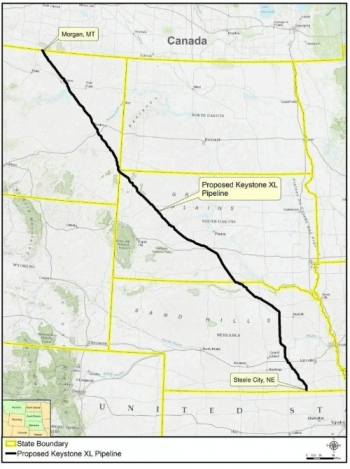 The route of the proposed Keystone XL Pipeline.
Credit: U.S. Dept. of State

Climate change is front-and-center in the debate over whether the pipeline should be built because of the high energy intensity of extracting the Canadian tar sands and the carbon dioxide emissions that result from mining, processing and burning them.

The U.S. Environmental Protection Agency estimates that that the energy required to process tar sands oil is so great that oil piped through the Keystone XL will emit 1.3 billion more tons of greenhouse gas emissions over the pipeline’s 50-year lifespan than if it were carrying conventional crude oil.

There’s a big difference between conventional crude oil and the type of oil called bitumen that the Keystone XL would carry. Bitumen is a heavy form of crude oil that is so thick that it can’t flow through pipelines until it’s diluted with liquid chemicals to create a substance called diluted bitumen, or “dilbit,” which would be refined into motor fuel in Texas.

Despite the possible climate impacts of the pipeline, it is not certain that the Obama administration will deny TransCanada’s permit application to build the Keystone XL Pipeline. Obama’s veto is seen more as a political move than a scientific one, rejecting Congress’ desire to usurp the State Department’s authority to authorize an international oil pipeline.

After postponing a final decision on the Keystone XL indefinitely, the State Department has hinted that its decision could be forthcoming sometime this year but its review of TransCanada’s permit application is ongoing.

“Once we have analyzed all of the information needed for completion of the review, and prepared the final documents, then a determination will be made,” a State Dept. statement issued to Climate Central Tuesday said, adding that the department is following no specific timeline.

If the State Department approves TransCanada’s permit, construction may be able to move ahead. If the permit is denied, the Keystone XL Pipeline cannot be built into the U.S. and effectively dies, though the tar sands oil may have other routes to refineries anyway.

Even if the federal government approves the pipeline, the Keystone XL faces legal hurdles in Nebraska and South Dakota. TransCanada is fighting with property owners over its use of eminent domain for the pipeline’s route through Nebraska, and in South Dakota, the company is awaiting the state’s Public Utilities Commission’s approval before being allowed to move ahead with construction there.

You May Also Like:
Here’s What the Inside of Greenland Looks Like, in 3D
Winter Is Losing Its Cool
Hot Years, Long Odds
Farming Now Worse For Climate Than Deforestation
Three Tools to Solve The Mystery of Ocean Acidity