LIMA, Peru — As a fortnight-long round of climate negotiations ground into their grueling final days here, U.S. State Department Secretary John Kerry on Thursday stopped by to remind the gathering of the critical importance of reaching a meaningful agreement.

During a speech in a media tent during a visit that wasn’t expected to last longer than several hours, Kerry spoke hopefully of the role that energy policy could play in addressing the threat of climate change — a “global threat” that he said “ranks up there, equal” with any other, including terrorism, extremism, epidemics, poverty and nuclear proliferation.

“While nobody here believes that a global climate agreement is going to be a silver bullet that eliminates this threat, I think everybody here can agree that we certainly won’t eliminate it without an agreement,” Kerry said during his 30-minute speech in front of a packed audience of journalists, State Department officials, official delegates and former vice president Al Gore. 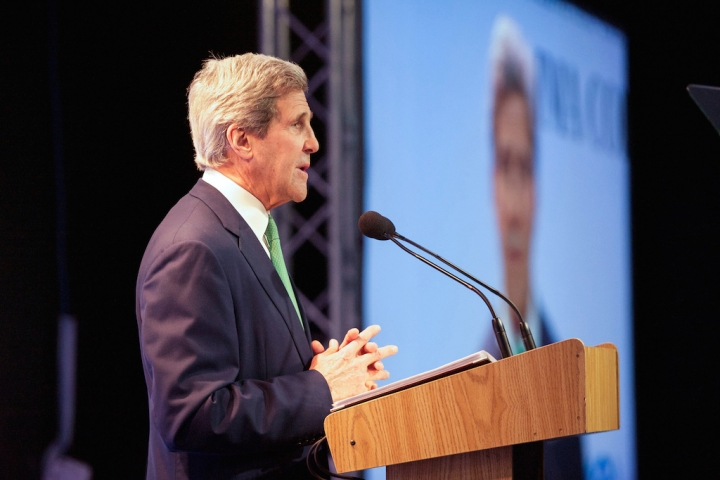 The afternoon speech came hours after the United Nations published the latest draft of one of the two main agreement documents under negotiation at these talks, revealing that accord had been reached on just a single paragraph in what is now a 50-page document.

Despite the apparent intransigence of negotiating teams, which remain divided on several critical issues — including whether commitments made under the upcoming climate agreement, due to be finalized in a year in Paris, should be legally binding, and the extent to which financial and climate adaptation issues should be addressed in the pact — veterans of climate talks pointed out that last-minute accord has become a hallmark of such negotiations. “This is not shocking,” lead U.S. negotiator Todd Stern told reporters Wednesday afternoon of the sluggish pace of negotiations. “I’m not alarmed by this.”

The draft agreements are due to be finalized Friday, though many expect the meetings to drag into Saturday.

Kerry spoke at length of the exponential increase in dangers that the world faces if it fails to address climate change, of the need for all nations, both rich and poor, to contribute to a solution, and he was upbeat in his assessment that reforming energy policies could prevent the worst of global warming — while creating jobs and fortifying economies with rapid growth in clean-energy industries.

Climate negotiations experts said Kerry’s visit sent a strong signal from the U.S. government. He was the most senior government official to attend such a meeting since 2009, though he wasn’t expected to be actively involved in the negotiations.

“It’s another high-level sign of the seriousness that the secretary and the Obama Administration attach to making global progress on climate action, and to building on the positive outcomes of the U.S.-China bilateral announcement,” Alex Hanafi, a senior climate official at the Environmental Defense Fund, said. “There are difficult issues in Congress, but the Administration is very engaged.”

Kerry’s speech alternated between calls to action, warnings of the consequences of inaction, and strongly worded pleadings with negotiators from all nations.

“We’re still on a course leading to tragedy,” Kerry said. “This morning I woke up in Washington to the television news of super-storm rainfall in California and Washington state; torrential record-breaking rain in record-breaking short time. It’s become commonplace now to hear of record-breaking climate events.” 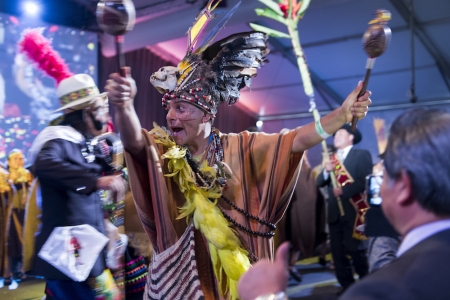 A performer at a cultural event during the Lima climate talks this week.
Credit: H.E. Mr. Sam K. Kutesa/flickr

Kerry spoke snidely of those who deny the importance or cause of climate change, referring to “industry paid-for false analyses that try to suggest” that human activity is not dangerously overheating the globe.

He was up-front about the enormous challenges the world faces in tackling global warming. But he said “those who ignore this moment, no matter their reasons,” would not, “and should not,” be forgiven by future generations.

“If any challenge requires global cooperation and effective diplomacy, this is it,” he said. “Mankind is creating the problem and mankind can solve the problem, and unlike some problems that we face, this one already had a ready-made solution provided by mankind that is staring us in the face. The solution to climate change is energy policy.”

Kerry described the Lima meeting as a “critical stepping stone” on a path toward agreement in Paris next year. Nations are due to announce commitments early next year regarding what steps they will take toward slowing climate change under that agreement after 2020.

“We’re not going to solve everything at this meeting, or even in Paris. I understand that. But we must take giant measurable clear steps forward that will set us on a new path — and that means concrete actions and ambitious commitments,” Kerry said.