July marked an unprecedented 15th straight record-hot month, according to data released Wednesday by the National Oceanic and Atmospheric Administration, whose records go back to 1880.

NOAA’s temperature data also confirmed that July was not only the record warmest July ever, but the hottest month ever on record, in agreement with NASA data released Monday. 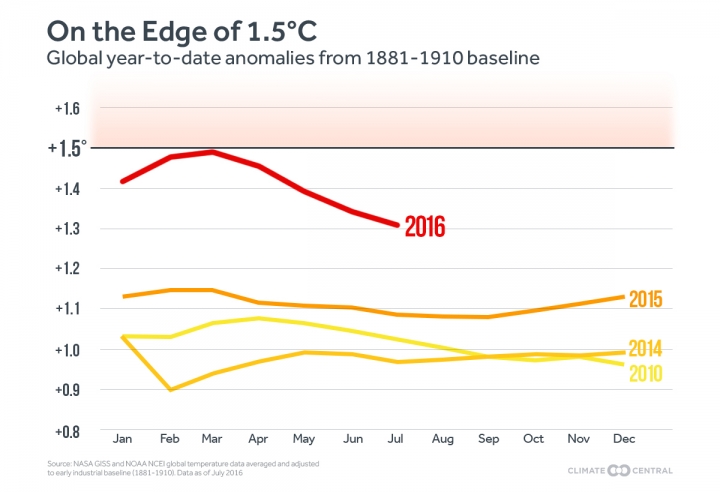 The record-hot July maintains 2016’s position as the warmest year-to-date by far and makes it more likely that it will stay that way through year’s end. It also shows just how much global temperatures have risen over the last century, as they stay close to 1.5˚C above preindustrial temperatures.

In NOAA’s dataset, July was 1.57°F (0.87˚C) warmer than the 20th century average. By NASA’s reckoning, it was 1.27˚F (0.84˚C) hotter than the 1951-1980 average. Different agencies use different baselines and different methods of handling the temperature data, which leads to small variations in the monthly temperature numbers, though all are in agreement on the long-term trend in warming and how intensely hot this year has been globally.

With forecasts for La Niña, which tends to cool global temperatures, suggesting the event may arrive later and be weaker than previously predicted, there will likely be less of an effect on temperatures this year. That makes it more likely that temperatures for the remainder of the year will stay warm enough to keep 2016 in first place, ahead of the current hottest year on record, 2015.

Efforts to curb global warming have aimed at limiting the Earth’s temperature rise to less than 2˚C (3.6˚F) above preindustrial times by the end of the century, though there are talks of trying to meet a more aggressive target of 1.5˚C. 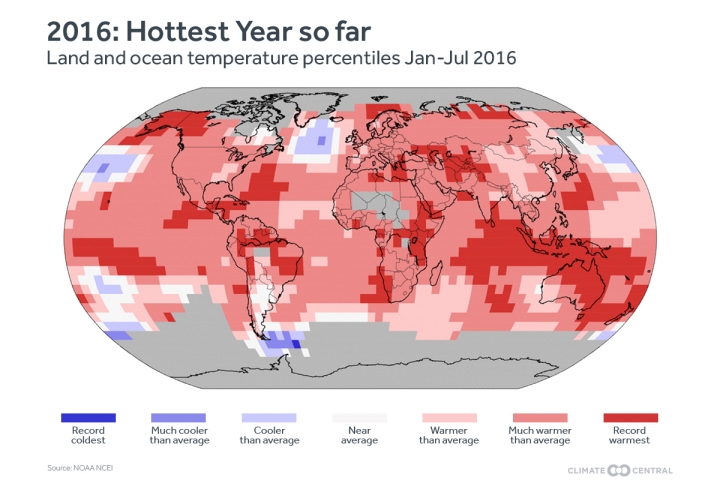 How temperatures around the globe have differed from the 20th century average through July.
Click image to enlarge. Credit: NOAA

To put this year’s temperatures into that context, Climate Central has been reanalyzing NOAA and NASA data each month. The two datasets are averaged and then compared to the average from 1881-1910, a baseline closer to the preindustrial period.

The temperature from January through July this year is 1.31˚C (2.36˚F) above the average from that period.

How the year-to-date temperature has progressed each month is represented in the graph at top. It reached a peak during winter when monthly temperature anomalies (or the amount each month was hotter than average) were at their apex.

During those months, the global average temperature was edging very close to 1.5˚C above preindustrial times. The average has since come down slightly, following the slight drop in monthly anomalies, though is still well above 2015 and indicative of the long-term trend in warming. 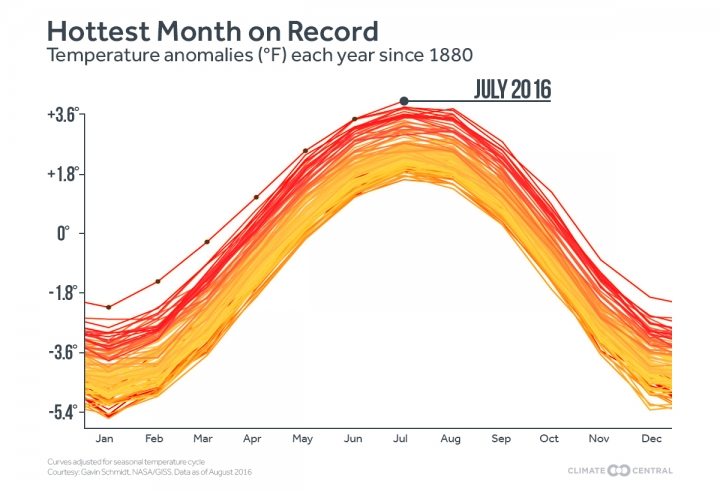 July was the warmest month ever measured in 137 years of record-keeping.
Click image to enlarge.

It is likely that July will be the last record warm month this year, according to Gavin Schmidt, director of NASA’s Goddard Institute for Space Studies, given that the boost from El Niño generally lags by about two to three months after the event’s demise.

While El Niño helped spike global temperatures this year, it is the decades of steady warming driven by the accumulation of greenhouse gases in the atmosphere that accounts for the bulk of the excess heat.

So while the records may stop for a time, the coming months and years will still be far warmer than average, and the scales are tipped in favor of record heat over record cold. How much in favor? While 14 of the 15 warmest years on record have occurred in the 20th century, the last record cold year was in 1911.