July Checks In as 4th Warmest on Record Worldwide

If you spent your summer in the Midwest or almost anywhere in the U.S. south of New York where the season was mild, it may have been easy to miss that most of the rest of the world was baking last month.

New National Climatic Data Center (NCDC) data show that last month was the fourth-warmest July on record worldwide, even though two giant cool spots in the Northern Hemisphere — one over Siberia and the other over the U.S. Midwest — made it easy for people living there to think that summer 2014 has been a mild one. 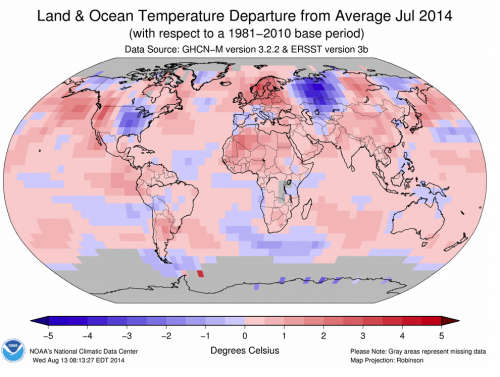 The world’s fourth-warmest July comes just after the globe’s warmest June, which was driven mostly by the hottest ocean temperatures since recordkeeping began 130 years ago. 2014 is on track to become the earth’s third-warmest year in on record.

The combined average temperature over land and ocean surfaces last month was 1.15°F above the 20th century average of 60.4°F, NCDC data show.

Sea surface temperatures last month were about 1°F above the 20th century average, tying 2009 as the warmest July on record. The global land surface temperature was the 10th highest for July since recordkeeping began, but the coolest since 2009.

All this warmth is connected with an increase in greenhouse gases in the atmosphere worldwide caused primarily by human carbon dioxide emissions, which continue their ongoing rise.

Other agencies in the U.S., Japan and Europe that calculate global average temperatures have wildly different results for last month’s ranking of the warmest Julys on record.

The difference in the rankings is based on the methods each agency uses to fill in gaps in data for places such as the Middle East and the poles where temperatures are not monitored, he said. NASA is aggressive in filling those gaps in data, whereas scientists in Japan and the United Kingdom are more conservative, each one reaching different results for global average temperatures for a given month, Arndt said.

“There are four unique approaches to try to measure a really complex thing,” Arndt said. “In the long run we do see month-to-month differences.”

While the data may differ month to month, each agency is showing the same trend: the earth is warming.

“We all see the same signal,” Arndt said. “All datasets singing same song, but hitting different notes along the way.” 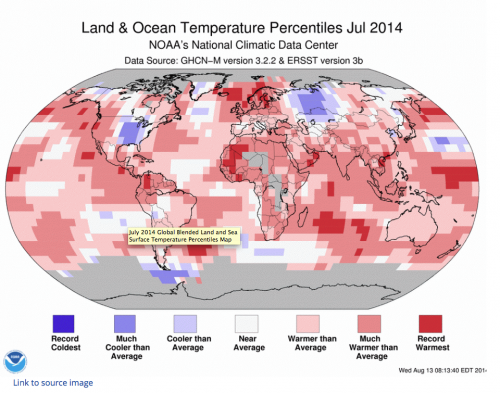 Last month’s mild weather in the U.S., caused in part by an incursion of cold polar air, was centered on Indiana and Arkansas, each of which had its coolest July on record last month, according to the NCDC analysis. Arkansas averaged 4.6°F below the 20th century average temperature.

While the Midwest was quite cool and parts of Russia saw temperatures up to 5°F below average, the Western U.S. and Scandinavia were among the globe’s warmest regions last month, seeing temperatures greater than 2°F above average.

And that means that if you live in Indianapolis and had to don a light jacket one cool July evening, your summer was unlike nearly everyone else’s on the planet.

You May Also Like
Bike Sharing: How Climate Friendly Is It?
Picture This: Twin Waterspouts and Amazing Aurora
What’s Behind Super Typhoon’s Rapid Intensification?
Planet is Running a Temp: State of the Climate 'Check-Up'