By Justin McCurry, The Guardian

Almost three-quarters of Japan’s biggest coral reef has died, according to a report that blames its demise on rising sea temperatures caused by global warming.

The Japanese environment ministry said that 70 percent of the Sekisei lagoon in Okinawa had been killed by a phenomenon known as bleaching. 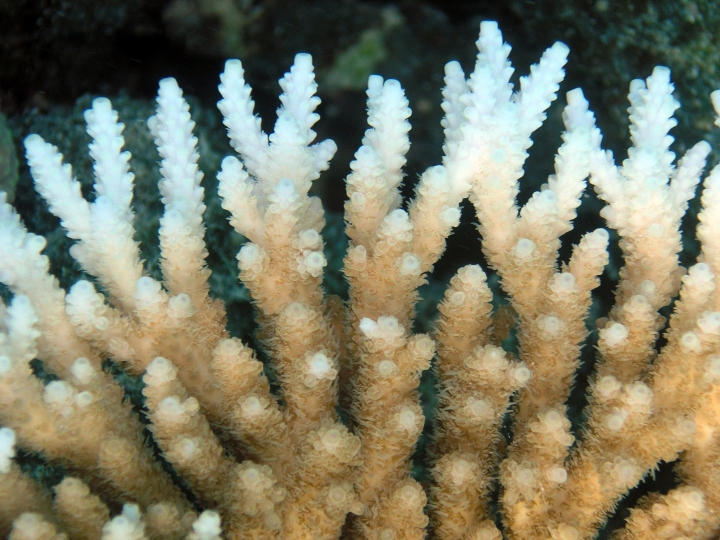 The white tips on this coral are a reflection of “bleaching” and declining coral health.

Bleaching occurs when unusually warm water causes coral to expel the algae living in their tissues, causing the coral to turn completely white. Unless water temperatures quickly return to normal, the coral eventually dies from lack of nutrition.

The plight of the reef, located in Japan’s southernmost reaches, has become “extremely serious” in recent years, according to the ministry, whose survey of 35 locations in the lagoon last November and December found that 70.1% percent of the coral had died.

The dead coral has now turned dark brown and is now covered with algae, the Yomiuri Shimbun said.

The newspaper said the average sea surface temperature between last June and August in the southern part of the Okinawa island chain was 30.1 degrees centigrade – or one to two degrees warmer than usual – and the highest average temperature since records began in 1982, according to the Japan meteorological agency.

The ministry report follows warnings by the Coral Reef Watch programme at the US National Oceanic and Atmospheric Administration that global coral bleaching could become the “new normal” due to warming oceans.

Experts said that bleaching had spread to about 90% of the Sekisei reef, a popular diving spot that covers 400sq km.

A similar survey conducted in September and October last year found that just over 56% of the reef had died, indicating that bleaching has spread rapidly in recent months.

Reprinted from The Guardian with permission